With masks, bus delays and a new school, Kentucky's largest district goes back to class 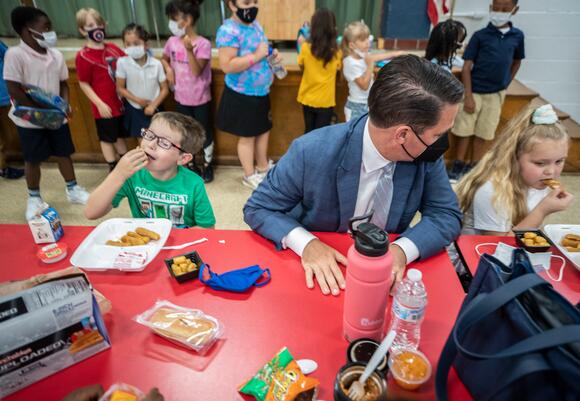 Rays of sunlight streamed through the trees around Waggener High School on Wednesday morning.

“Let’s go! Rise and grind!” Trowell, better known as "Ms. LD," shouted at everyone from a trio of lanky students to Mayor Greg Fischer.

Similar scenes played out across Louisville on Wednesday as about 95,000 students returned to Jefferson County Public Schools to start a new school year.

Follow along: Weekly updates about Louisville schools, delivered straight to your inbox

The challenges facing Kentucky’s largest school district in its fourth year impacted by COVID-19 were clear even before the first student hopped on a school bus Wednesday morning.

In classrooms and hallways, students and staff wore masks — largely without issue — after the school board kept its universal mask mandate in place despite increased pushback from teachers and parents .

Unexpected bus delays are normal for the first week of school. But this year, JCPS knew ahead of time that dozens of bus routes wouldn’t have a driver on the first day , causing delays of anywhere from 15 minutes to over an hour, and it impacted about a quarter of JCPS schools.

School districts have been facing bus driver shortages for more than a year, as they struggle to compete for licensed drivers. Amanda McGrath, a fifth-grader teacher at Bowen Elementary, is one person who stepped up to drive in the past year.

She decided last fall she needed an extra job because “kids are expensive,” she told reporters. And JCPS needed drivers to combat a continuing driver shortage, and was willing to let her drive a route to and from Bowen.

Her day starts a bit earlier, and she takes more work home in the evenings, but McGrath said she enjoys it. The students on her route think so, too, she added.

In Newburg, the new Indian Trail Elementary didn’t have any routes delayed by a driver shortage. Instead, they faced major delays in their car rider line.

Families arrived at Indian Trail Elementary to learn the school didn’t have a crossing guard. Volunteers from a nearby church and the police stepped in, but the school’s car drop-off line was backed up for blocks. Parents and uniform-clad students were still checking in an hour after school started.

Once inside, they navigated a brand-new campus — a nearly $17 million facility that is the first new school to open in JCPS in six years .

Minutes after arriving, school board vice chairman Corrie Shull found himself in front of a line of first graders, tying their shoes. At one point, Superintendent Marty Pollio joined him.

Shull, who represents Newburg, said he met with all of his district’s principals after being elected in 2018. Indian Trail Principal Joseph Wood told him they needed another building.

And now they have it.

After teaching in the old building for five years, kindergarten teacher Timothy Crook said it is nice to have the new space.

“It is sweet ,” Crook said of the new building.

Teachers shortage: What can be done — or should be done — to keep people in Kentucky classrooms

Upstairs, fourth and fifth graders who spent much of their education in the old building felt more mixed.

“What do y'all think of the new school?” Pollio asks a class of fourth graders, getting a collective “good.”

But when asked if they missed the old building, half of the class raised their hands. One student raised his hand to ask Pollio why the new school smelled so much better than the old one.

More: When do local schools head back to class?

Indian Trail wasn’t supposed to be the only new school opening Wednesday. A new Wilkerson Elementary was set to open in southwest Louisville, only to be delayed after failing its building inspection because of a leaky roof.

Wilkerson’s students instead attended class at the old Watson Lane Elementary, which closed earlier this year to merge with Wilkerson on the new campus.

Sun-bleached posters about the new school still hung on Watson Lane’s front doors. Signs of its old identity remained on the walls and on the floors. But teachers wore royal blue T-shirts saying Wilkerson rather than Watson Lane.

The differences between the decades-old Watson Lane building and the new Indian Trail facility are clear.

All of the furniture at Indian Trail is modern and brand-new. Watson Lane’s fixtures look like they could be relics from when the school first opened. 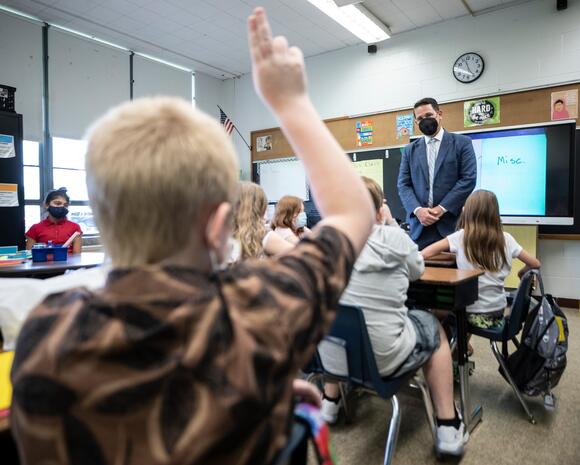 Inside one classroom, fifth graders grilled Pollio on why their new school isn’t done.

I knew it wouldn’t be finished, one girl proclaimed.

“Well, you were right,” Pollio responded after a brief pause.

The roof was a big problem, Pollio explained about the cause of the delay.

“Is it also because the walls weren’t painted?” a student in the back asked. I guess so, Pollio said.

When will the new school be done, another student asked. Inspectors come back at the end of the week, Pollio said. If they say "yes," students could move to the new campus in two weeks.

Reach Olivia Krauth at okrauth@courierjournal.com and on Twitter at @oliviakrauth .

This article originally appeared on Louisville Courier Journal: With masks, bus delays and a new school, Kentucky's largest district goes back to class

my high school kids chose not to wear masks to school today. so when I get home we will see how that went