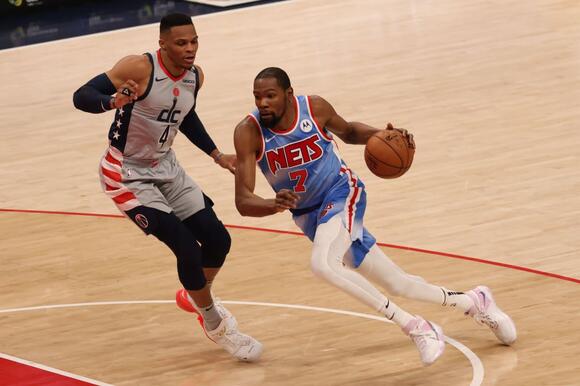 Begley : "A few notes on the Nets and Kevin Durant….

Begley also added that the Philadelphia 76ers are another team Durant would be open open to playing for.

Begley : "Durant also sees Philadelphia as another welcome landing spot, per people familiar with the matter."

Begley's report comes after Shams Charania of The Athletic had a massive report about Durant on the Nets earlier in the week.

Charania : "In a meeting with Nets owner Joe Tsai, Kevin Durant reiterated his trade request and informed Tsai that Tsai needs to choose between Durant or the pairing of general manager Sean Marks and coach Steve Nash, sources say."

Durant averaged 29.9 points per game on over 51% shooting from the field last season, while also dishing out a career-high 6.4 assists per contest.

The Nets were the seventh seed in the Eastern Conference, and got swept in the first-round of the NBA Playoffs by the Celtics.

The 12-time NBA All-Star signed with the Nets in the summer of 2019, but missed the first season due to injury.

In the two seasons that he has played for the Nets, they have won just one playoff series.

Prior to the Nets, he played for the Golden State Warriors and Oklahoma City Thunder.

He won the MVP Award in 2014 with the Thunder, and two NBA Championships with the Warriors.

On June 30, ESPN's Adrian Wojnarowski reported that he requested a trade from the Nets.

After over a month, he still remains on the Nets on August 10.

On Thursday, Jamal Crawford announced that he will be joining the NBA on TNT. The three-time 6th Man of The Year most recently played for the Brooklyn Nets and Phoenix Suns.
BROOKLYN, NY・11 HOURS AGO
FastBreak on FanNation

2 Warriors Stars Reportedly Get Into A Fight At Practice

On Wednesday night, Shams Charania and Anthony Slater of The Athletic reported that an altercation took place between Draymond Green and Jordan Poole at Golden State Warriors practice.
SAN FRANCISCO, CA・1 DAY AGO
FastBreak on FanNation

According to a press release from Rider men's basketball, NBA veteran Jason Thompson has retired. The 36-year-old spent eight seasons in the NBA playing for the Sacramento Kings, Golden State Warriors and Toronto Raptors.
NBA・1 DAY AGO
FastBreak on FanNation

Brooklyn Nets superstar Kyrie Irving recently posted a photo of him and his daughter on Instagram.
BROOKLYN, NY・1 DAY AGO

The Charlotte Hornets and Miles Bridges have allowed his $7.9 million qualifying offer making him a restricted free agent to expire.
CHARLOTTE, NC・2 DAYS AGO
FastBreak on FanNation

On Thursday, Rod Boone of The Charlotte Observer reported that the Charlotte Hornets waived Isaiah Whaley. He went undrafted in the 2022 NBA Draft and played his college basketball for UConn men's basketball.
CHARLOTTE, NC・12 HOURS AGO
FastBreak on FanNation

Golden State Warriors Give An Update On Recent Altercation At Practice

Four-time NBA All-Star Draymond Green and Jordan Poole got into a physical altercation at Golden State Warriors practice on Wednesday, which has led to the team giving an update as to what the aftermath of this situation means.
SAN FRANCISCO, CA・5 HOURS AGO
FastBreak on FanNation

The Phoenix Suns remain engaged in trade conversations around the league surrounding veteran forward Jae Crowder as the 2022-23 NBA season draws near.
PHOENIX, AZ・2 DAYS AGO

Zion Williamson threw down a big dunk during Tuesday’s preseason game between the New Orleans Pelicans and Chicago Bulls.
NBA・1 DAY AGO
FastBreak on FanNation

On Monday, the Cleveland Cavaliers announced that Evan Mobley would miss 1-2 weeks with a right ankle sprain.
CLEVELAND, OH・2 DAYS AGO
FastBreak on FanNation

The Golden State Warriors have officially signed Ty Jerome, who was recently traded to the Houston Rockets by the Oklahoma City Thunder and subsequently waived.
SAN FRANCISCO, CA・2 DAYS AGO
FastBreak on FanNation

On Thursday, the Charlotte Hornets announced the signing of Xavier Sneed. The 24-year-old spent his rookie season in the NBA playing for the Utah Jazz and Memphis Grizzlies last year.
CHARLOTTE, NC・10 HOURS AGO

Rudy Gobert will play in Thursday’s game between the Minnesota Timberwolves and Los Angeles Lakers.
MINNEAPOLIS, MN・1 HOUR AGO
FastBreak on FanNation

On Tuesday, Ben Simmons posted four photos on his Instagram. On Monday, he played in his first game for the Brooklyn Nets.
BROOKLYN, NY・2 DAYS AGO
FastBreak on FanNation

The Los Angeles Clippers announced on Tuesday that they have waived Juwan Morgan, Michael Devoe and Lucas Williamson, three players who had signed training camp deals with the team.
LOS ANGELES, CA・2 DAYS AGO
FastBreak on FanNation

According to Anthony Chiang of the Miami Herald, Tyler Herro has been ruled out for Thursday’s preseason game between the Miami Heat and Brooklyn Nets.
BROOKLYN, NY・8 HOURS AGO

Giannis Antetokounmpo made a post to Twitter after the Milwaukee Bucks lost to the Atlanta Hawks.
MILWAUKEE, WI・5 HOURS AGO
FastBreak on FanNation

With the 2022-23 NBA season just around the corner, Fastbreak on FanNation has ranked the Top-10 players at every single position entering the new year. Here are the Top-10 rankings for the NBA’s best small forwards.
LAS VEGAS, NV・21 HOURS AGO