Oklahoma wind turbine bent in half, on fire, in wild video 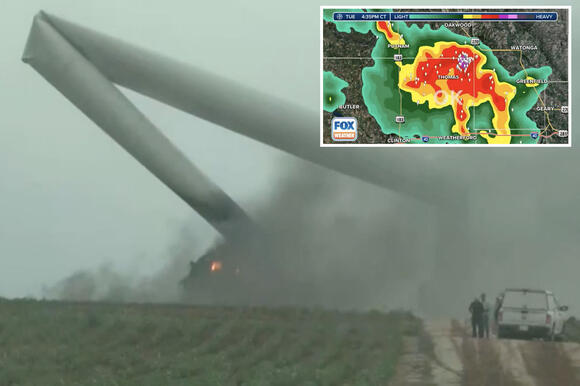 A massive wind turbine at one of the country’s largest wind farms is no more, thanks to the impacts of a strong thunderstorm that moved through central Oklahoma on Tuesday.

First responders arrived at the Traverse Wind Energy Center around 4:30 p.m. to find one of the turbines on fire.

Video from the scene showed what is believed to be one of the massive GE turbines on the ground with its support structure folded as if it was made of cardboard.

A spokesperson for the Public Service Company of Oklahoma said the site has been secured, and there were no injuries.

The utility company said the cause of the incident is under investigation, but the scene looked similar to the destruction of a wind turbine in Texas after a direct lightning strike in late July.

Doppler radar indicated there was plenty of lightning around the Traverse wind facility before the turbine caught fire, but officials have not confirmed if lightning played a role in the incident.

The 356 GE turbine-powered wind farm spans two counties in Oklahoma and is considered to be one of the world’s largest wind farms .

The utility company did not report any other damage to the facility from the storms.