Woman accuses SF firefighter of injecting her at Chase Center 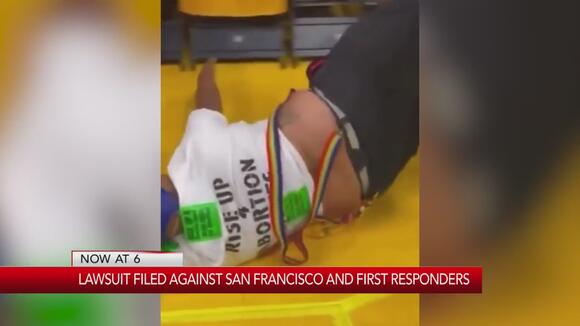 “Giving an injection to a protester against her will is shocking and illegal,” Burris stated. “In my entire career, I have never heard of a sedative being given to anyone, especially a fully restrained protester who was not a danger to themselves or others. What are the SFPD and SFFD criteria for injecting anyone with a sedative against their will absent a profound showing of an impending medical condition or preventing harm to others.”

A press release alleges that McKnight and her friend, Amanda Piasecki, were at a Golden State Warriors playoff game against the Boston Celtics at San Francisco’s Chase Center on June 13 when they unfurled a banner that stated “Overturn Roe? Hell No!” and began to chant “Abortion on Demand and without apology. Without this basic right, women cannot be free. Rise up for abortion rights.”

The two made their way to the main floor, at which point they were surrounded by security guards, who physically removed them from the arena, according to the press release.

“Once outside the area, Ms. Piasecki was immediately released, but not so for Ms. McKnight,” the press release states. She was held down with a knee in her back and an officer’s forearm across her neck, choking her, and she was handcuffed. She was threatened with being injected with a sedative by a San Francisco police officer, for which she protested. She firmly refused any injections. She was placed on a gurney and strapped down. Notwithstanding her protest and without her consent, she was injected with a sedative by a San Francisco fire department personnel. She was transported to Kaiser Hospital and, shortly after that, was released.”

McKnight alleges that the sedative “made her sluggish and caused the slurring of her words. Mrs. McKnight believes that the police officers’ and para-medics treatment of her was arbitrary. She questioned the officers/personnel as to whether they were only giving sedatives to Black people,” the press release states.

A press conference is scheduled for 11 a.m. at Chase Center. The San Francisco Fire Department directed KRON4 to seek comment from the City Attorney’s office.

“We have yet to be served with the lawsuit,” Jen Kwart, the director of communications for City Attorney David Chiu stated to KRON4. “We will review it once we are served and respond appropriately.”

The videos show her holding on to things as she is dragged out. She was refusing to leave peacefully. Thats not a protest, its a meltdown. She must have been acting nuts because otherwise they would have taken her to jail where she belonged. Still he paramedics shouldnt have injected her without ensuring she wasnt allergic.

This whole story reeks of lies and liberalism.

A local house on a curved street in San Francisco has had a couple of 'unlucky' collisions over the past 90 years.
SAN FRANCISCO, CA・12 HOURS AGO
KRON4 News

Bay Area has been site of notorious serial killers

SAN FRANCISCO (KRON) – News that a fatal shooting in Oakland might be linked to a serial killer in Stockton brings back painful memories of serial killers with links to the Bay Area in the past. KRON4 News remembers five of the most brutal killers who left their mark on the region. The Zodiac killer […]
SAN FRANCISCO, CA・1 DAY AGO
KRON4 News

SAN JOSE, Calif. (KRON) — A 74-year-old man was arrested on homicide charges in connection to a September 30 homicide in San Jose, police said Wednesday. Sital Singh Dosanjh, 74, is accused of fatally shooting a woman who was later found dead inside a car on Almaden Expressway. On the evening of the homicide, “Officers […]
SAN JOSE, CA・20 HOURS AGO

Who cleans up Bay Area homicides?

(KRON) – – The city of Oakland has seen over 100 homicides this year, Mary and Michael McIntosh have been at the center of many of them. Their most recent call, a shooting at a house party in Oakland that killed two teenage boys from Berkeley. Diablo Crime Scene Cleaners is a privately owned company […]
OAKLAND, CA・1 DAY AGO
KRON4 News

SANTA CLARA COUNTY, Calif. (KRON) – Cal Fire’s Santa Clara Unit is working on putting out a fire on Mt. Umunhum, in the Santa Cruz Mountains in Santa Clara County. The grass fire is approximately 2-3 acres, according to a tweet, and “extremely difficult access in steep terrain.” The fire is spreading slowly, the tweet […]
SANTA CLARA COUNTY, CA・23 HOURS AGO
KRON4 News

CONCORD, Calif. (KRON) — The Sunvalley Shopping Center in Concord was evacuated after a report of a person with a gun Wednesday afternoon, KRON4 confirmed. One person was taken into custody at about 4:45 p.m., and nobody was injured. The incident started at about 2:45 p.m. when a man walked into a jewelry store and […]
CONCORD, CA・16 HOURS AGO
KRON4 News

ALAMEDA, Calif. (KRON) — A man has been arrested after police found him underneath a car with a catalytic converter, according to a statement from Alameda Police Department. Over the weekend, an officer on patrol around Clement Avenue and Elm Street noticed a vehicle that didn’t have license plates with an open trunk. Police said […]
ALAMEDA, CA・20 HOURS AGO

Suspects arrested for firing into a crowd in East Palo Alto

EAST PALO ALTO, Calif. (KRON) — Three people have been arrested in connection with a shooting that occurred Sept. 10, the East Palo Alto Police Department announced Tuesday. Police said two shooters fired into a crowd of people, but nobody was hit. Police responded to 1959 Manhattan Avenue around 11:16 p.m. the night of the […]
EAST PALO ALTO, CA・1 DAY AGO
KRON4 News

ALAMEDA COUNTY, Calif. (BCN) – Alameda County’s homeless population grew 22 percent over the past three years and is approaching 10,000 people, according to the release Wednesday of official point-in-time numbers. The count completed in February was the first since 2019 and was delayed a year because of the COVID-19 pandemic. Counts are typically taken […]
ALAMEDA COUNTY, CA・3 HOURS AGO
KRON4 News

OAKLAND, Calif. (KRON) – The California State Building at 1515 Clay Street in downtown Oakland was evacuated after a suspicious package was received, California Highway Patrol has confirmed. “The CHP is responding to a report of a suspicious package at the state building,” a CHP spokesperson told KRON4 News. “Out of an abundance of caution, […]
OAKLAND, CA・1 DAY AGO
KRON4 News

Victim will be okay after hang-glider crash at Fort Funston

SAN FRANCISCO (KRON) — One person is injured following a hang-gliding crash at Fort Funston, the San Francisco Fire Department said. The crash was reported around 6 p.m. Monday. The adult patient made a “hard landing” by falling ten feet and landing on their head, according to SFFD. The individual is in stable condition and […]
SAN FRANCISCO, CA・2 DAYS AGO

Oakland’s ShotSpotter technology records over 100 gunshots in one week

OAKLAND, Calif. (KRON) — Oakland’s ShotSpotter system recorded over a hundred gunshots across the city in less than a week, according to data released by Oakland Police Department. Between Sept. 26 and Oct. 2, OPD’s ShotSpotter technology reported 139 activations across the city. That’s an average of nearly 20 activations per day. Since the start […]
OAKLAND, CA・1 DAY AGO
KRON4 News

Two teenagers have been arrested in the assault of a homeless man in Santa Cruz, according to a statement from Santa Cruz Police Department.
SANTA CRUZ, CA・1 DAY AGO
KRON4 News

The U.S. Coast Guard rescued four people and two dogs after their boat began sinking one mile off of Point San Pablo in the San Francisco Bay.
SAN FRANCISCO, CA・1 DAY AGO

Police: 1 arrested for robbery, attempted murder at Smart and Final

ANTIOCH, Calif. (KRON) – A 29-year-old man has been arrested in Antioch, accused by police of stabbing a 58-year-old man in a robbery at a Smart and Final location, according to a press release. Officers responded at 10:51 a.m. Tuesday to a report of a robbery at 2638 Sommersville Road. When they arrived, they found […]
ANTIOCH, CA・22 HOURS AGO
KRON4 News

SAN FRANCISCO (KRON) — The San Francisco Police Department is offering $200,000 for information leading to the suspects responsible for killing a man in 2016. The victim of the homicide in question is Keron Lamotte. The homicide took place on October 7, 2016, at the intersection of Plymouth Avenue and Broad Street, police said. Lamotte […]
SAN FRANCISCO, CA・2 DAYS AGO
KRON4 News

A $125,000 reward is being offered for information that helps catch a suspected California serial killer.
OAKLAND, CA・1 DAY AGO
KRON4 News

SAN FRANCISCO (KRON) — City officials joined together Wednesday to detail efforts targeting the open-air drug market in San Francisco. “The fact is, we have so many people who are publicly using drugs without any consequences whatsoever, and that’s what we have to stop,” said Mayor London Breed. “My approach to dealing with the open-air […]
SAN FRANCISCO, CA・14 HOURS AGO