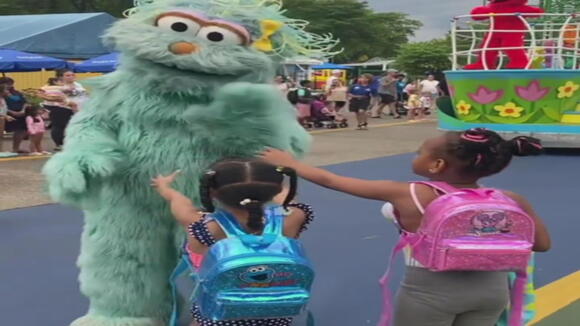 Sesame Place has announced a racial equity review following allegations of bias after a now-viral video sparked protests and calls for a boycott of the Bucks County theme park.

The family of the two little girls alleges the costume character Rosita snubbed the Black girls during a parade on July 16.

Jodi Brown, who shared the experience on Instagram, says the character high-fived a White child and woman, then gestured "no" and walked away from her daughter and niece who had their arms stretched out for a hug and high-five.

In a release issued Tuesday, Sesame Place says the equity review will be chaired by national civil rights experts. It will also include mandatory anti-bias training for all employees by the end of September, along with enhancements to the current diversity program.

Sesame Place's president says "the actions we are taking will help us deliver on our promise to provide an equitable and inclusive experience for all our guests."

Bucks County's diversity officer will also review the park's policies once all litigation has been resolved.

"It is absolutely more than just on our radar," Bucks County project and diversity officer Bernard Griggs Jr. said.

Brown and her attorney will meet with SeaWorld's CEO on Thursday. Civil rights leaders, including Rev. Jesse Jackson, will also be in that meeting.

LaMarr released a statement to Eyewitness News about the meeting.

"We acknowledge SeaWorld's recent response to the public demands made by Rainbow PUSH, NAACP, Until Freedom, and others, that stemmed from the July 16 incident at Sesame Place in Langhorne, Pa. On Thursday, Aug. 11, the parents of Skylar and Nylah will accompany me to a meeting with SeaWorld's CEO, Marc Swanson, along with Rev. Jesse Jackson, and other leaders. It is our hope that this previously scheduled meeting will address the deficiencies we have noted from this most recent press release. We will provide a more detailed statement following this meeting," attorney B'Ivory LaMarr said.

All the 🪳 Cockroachs come running when there's a 🤑 money grab, Jesse Jackson and Al Sharpton Magically show up after year's in hiding.Sharpton owes the IRS 30 Million dollars in unpaid Taxes so opportunities like this are not to be missed!Sesame Place has operated for many years successfully,until New York Residents decided it was Racist and a prime Target 🎯 for some easy money. All it takes is Allegations in the Media and the Roaches come running. We'll see , When the Lights come on and the Real truth comes out the Roaches Scatter .

To solve the problem just stop the characters from touching any individual. Then momma can’t sue for $25 million

WEST CHESTER, Pa. (CBS) -- A local borough canceled its first LGBTQ celebration set for next weekend over hate-fueled responses. Many were upset over the planned drag show.On Monday, the West Chester Borough Republican Committee posted on its social media account that a drag show was going to be held downtown. They included a flyer for Outfest and shared one of the drag performer's Instagram accounts. They added, "If you feel this is inappropriate as we do, make your voice heard to borough council."Council President Michael Stefano told CBS Philadelphia that members of the council received a ton of emails."Pretty...
WEST CHESTER, PA・4 DAYS AGO
CBS Philly

PHILADELPHIA (CBS) – No more warnings as union workers at the Philadelphia Museum of Art are officially going on strike Monday. The strike was set to start at 8 a.m. Monday, but union members picketed even before then with their signs held high just above the north entrance. This strike comes about a week after workers held a one-day warning demonstration.Union members of Local 397 PMA Union say they've been in negotiations with museum management since October 2020 and since that demonstration not much has changed.According to them, important issues that remain on the table include improving wages and reducing the costs of healthcare.The last time we spoke with the museum spokesperson they said they were making considerable progress and were disappointed at the strike. During this strike, union members will not report to work in person at the museum or virtually.
PHILADELPHIA, PA・1 DAY AGO
CBS Philly

PHILADELPHIA (CBS) – The Philadelphia Police Union endorsed Mehmet Oz, the Republican candidate for U.S. Senate on Monday. The announcement was made Monday morning at the Philadelphia Fraternal Order of Police Lodge #5. Oz joined the group for the announcement.FOP President John McNesby said, "People in Philadelphia are going through an unprecedented crime wave." He said Oz stands for safer streets.
PHILADELPHIA, PA・21 HOURS AGO

"We feel like expendables": Temple Hospital workers protest due to staffing issues, contract

PHILADELPHIA (CBS) --  A picket line formed outside Temple University Hospital on Friday. Nurses and other union members say they are overworked and underpaid.Their contracts expire at the end of the month. "We have signs out here that say that we're heroes," Carlo Aviles, the President of TAP union, said. "Funny if you ask anybody picketing today we don't feel like heroes. We feel like expendables."On Friday, frontline health care workers dressed in blue scrubs and held bright red signs to voice their frustration."The work has been grueling," Mary Adamson, an RN and president of TUHN, said. "We walk through fire...
PHILADELPHIA, PA・3 DAYS AGO
CBS Philly

PHILADELPHIA (CBS) -- Protestors sick of the violence in Philadelphia staged a march Sunday morning through Temple University's campus. That's after a number of high-profile crimes in that area in the past few weeks.The police association came together with students and volunteers to stand up against violence in their neighborhood.One of those latest shooting incidents grazed an 8-year old girl in the head and blew out a dorm window on campus.
PHILADELPHIA, PA・1 DAY AGO
CBS Philly

PHILADELPHIA (CBS) – After seeing a spike in crime over the summer, Fairmount residents are coming together on Tuesday night in an effort to make their neighborhood safer. Residents tell CBS3 Fairmount feels less safe today than when they first started the Town Watch in February - so they're bringing it back with the hopes of putting pressure on police and city leaders to crack down on crime.After the first few meetings, residents told CBS3 they noticed more police officers patrolling the neighborhood. But since then, they feel the police presence has dropped and crime has steadily increased, especially in...
PHILADELPHIA, PA・3 HOURS AGO