Best of Both Worlds: Will Falcons' Feleipe Franks Play QB or TE Friday vs. Lions? 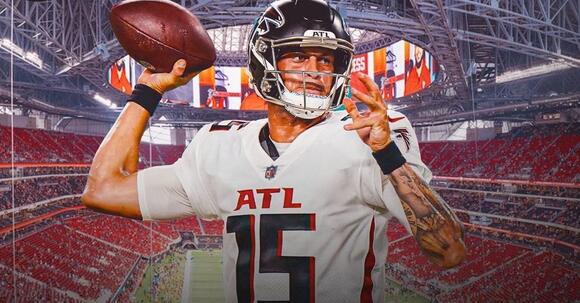 No matter the position, it appears Franks will play Friday in some capacity.

As someone who plays multiple positions, Feleipe Franks has a lot of responsibilities.

He's currently listed as the Atlanta Falcons third-string quarterback and tight end, but where will he play during the preseason?

With the preseason opener against the Detroit Lions just a few days away, Franks saw more snaps at quarterback than tight end on Tuesday during practice ... which is a change from most of what we saw in the first 10 days. By all accounts, Franks had a solid showing as a quarterback, with his arm strength and ball placement looking sharp.

The clear motive behind the switch is Atlanta's looming preseason opener. While Marcus Mariota and Desmond Ridder are likely to see a majority of the reps at quarterback, Franks is currently No. 3 on the depth chart, meaning he's an injury away from being the backup.

The Falcons will be keen to get Franks reps at both tight end and quarterback during the preseason to ensure he keeps growing at his likely long-term position while staying sharp at a position of need on Atlanta's current roster.

Franks' double duty as a tight end and quarterback has earned the praise of the coaching staff.

“It's extremely difficult (to do both)," Falcons tight end coach Justin Peelle said. "The thing you like about Feleipe is he's a competitor, he works hard, and he just wants to play football. However he can help this team win, that's what he's going to do."

And Franks has also earned the respect of his teammates.

"It's extremely impressive," sixth-round rookie tight end John FitzPatrick said. "He's selfless, he's a team player. Whatever they ask of him to do, he does it to the best of his ability, 100% effort every single time."

Franks will take the field with the Falcons in the preseason opener against the Lions Friday at 6 p.m.

The Atlanta Falcons' top-five rushing offense has suffered a blow, as Cordarrelle Patterson will miss at least four games. However, Sunday's win over the Cleveland Browns provided a glimpse of what's to come, and it's possible Atlanta's offense doesn't skip a beat.
ATLANTA, GA・7 HOURS AGO
Falcon Report

Atlanta Falcons running back and special teams ace Avery Williams wasn't one of the most commonly talked about players in his draft class, but he was well-liked by at least one other team - the Cleveland Browns, who travels to Atlanta for a road matchup on Sunday.
ATLANTA, GA・1 DAY AGO
DC News Now

The news every Washington Commanders fan has wanted to here. In D.C. running back Brian Robinson is officially back after being shot twice in late August. The rookie was activated off the non-injury football list on Monday and has 21 days to get back on the field starting Wednesday. “He was cleared by the doctors […]
WASHINGTON, DC・22 MINUTES AGO

The Atlanta Falcons have had four games come down to the final minutes, the last two of which have gone in their favor. Here are three takeaways from the Falcons' 23-20 victory over the Cleveland Browns.
ATLANTA, GA・1 DAY AGO
Falcon Report

Atlanta Falcons cornerback Dee Alford fought from Division II and the CFL to make the NFL, and while his journey was more than validated in the preseason, he proved he's right where he belongs against the Cleveland Browns.
ATLANTA, GA・1 DAY AGO
Falcon Report

The Atlanta Falcons have scored their first touchdown of Week 4, with a familiar face punching it in.
ATLANTA, GA・1 DAY AGO
Auburn Daily

Follow along with Falcon Report as we keep you up to date with all firings, hirings, and breaking news in the NFL
ATLANTA, GA・4 HOURS AGO
Tribune-Review

What to watch for in WPIAL sports on Oct. 4, 2022: First place on the line in volleyball sections

With three weeks left in WPIAL girls volleyball section play, five matches are set for Tuesday with at least a share of first place up for grabs. • Section 1-4A: Pine-Richland (3-1) visits North Allegheny (4-0) in a match you can hear on HSSN. The Tigers beat the Rams in the first meeting, 3-0.
SPORTS・1 MINUTE AGO
Falcon Report

The Atlanta Falcons running game proved to much for the Cleveland Browns on Sunday, finishing with 202 total yards on 35 carries, including a 10-play, 75 yard touchdown drive late in the third quarter.
ATLANTA, GA・10 HOURS AGO