Nets asked Celtics for Tatum and Brown in trade for Durant 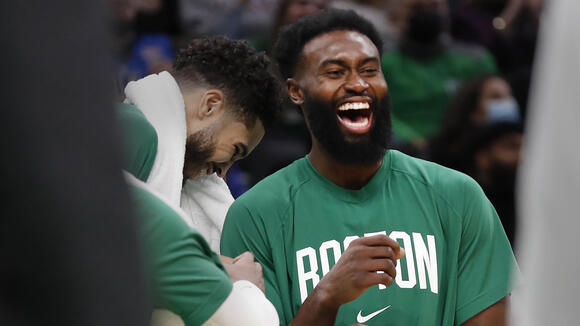 BOSTON -- The Brooklyn Nets are asking for a lot in return for Kevin Durant, as they should. But they're taking things a little too far in their discussions with the Boston Celtics.

It was reported a few weeks ago that the Nets were asking the Celtics for Jaylen Brown, Marcus Smart and a haul of draft picks in return for Durant. It's a hefty asking price that the Celtics reportedly balked at. But that is not their most outrageous ask in their Durant trade talks.

According to The Boston Globe's Adam Himmelsbach , the Nets initially asked for both Jayson Tatum and Brown.

Let that sink in for a minute. The Nets asked the Celtics for 25-year-old and 24-year-old budding stars in return for the 34-year-old Durant. Brad Stevens must have laughed them off the line after hearing that proposal, if he didn't simply hang up.

Maybe the game plan was to ask for something so outrageous that Boston would see the Brown-Smart swap as... less outrageous. It didn't work, since the Celtics scoffed at that deal too.

Durant turned his request into a full-on demand over the weekend, but Himmelsbach reported Wednesday that there "has not been any real traction on a potential deal that would send Kevin Durant from the Nets to the Celtics."

That will likely be the case until the Nets start asking for a more realistic package in return.

They know they can't get what they want and they don't wanna trade him they just wanna show K.D they tried to trade you like you ask now get us back to the playoffs 🤣

The Celtics employee with whom Ime Udoka had an affair helped make all his travel arrangements ... and that job sometimes included organizing travel for his fiancee, Nia Long. Sources connected to the couple and the NBA franchise tell TMZ ... one of the staffer's duties included planning Udoka's team-related travel, and we're told she was also involved in booking travel for Nia to come to Boston or to road games.
BOSTON, MA・2 DAYS AGO
CBS Boston

BOSTON -- The Celtics are heading into the new season with a new head coach, after the team suspended Ime Udoka for the year for multiple violations of team policies. There is no guarantee that Udoka will ever be back on the Boston bench, either.The details of Udoka's transgressions are still unknown, but it has been widely reported that he was engaging in an affair with a Celtics staffer. The Celtics hired an outside firm to look into the matter, and after a two-month investigation, the franchise handed down the harsh and unprecedented punishment to Udoka -- which the coach...
BOSTON, MA・12 HOURS AGO
CBS Boston

Celtics' first test of the season comes on Media Day

BOSTON -- Monday was supposed to be a fun day. It was the day that the Boston Celtics put on their uniforms, take a bunch of pictures, and answer a bunch of softball questions about the upcoming year.Celtics Media Day, however, will not be fun and games anymore. It's going to be an absolute circus.We'll still hear from players about how confident they are in the team, and how confident they are in themselves to put last season's Finals loss behind them and use it as motivation for this upcoming year. We'll still get a few quirky answers here and...
BOSTON, MA・1 DAY AGO
CBS Boston

Joe Mazzulla doesn't run from past issues with the law

BOSTON -- After suspending Ime Udoka for the 2022-23 season for violating team policies, the Boston Celtics were left looking for a new head coach. Brad Stevens said last week that the most logical replacement for Udoka was Boston assistant Joe Mazzulla.Mazzulla takes over with no head coaching experience in the NBA. His only time as a head coach came in Division 2 when he spent two years at Fairmont State. But he's been in Boston since 2019, first under Stevens and then with Udoka for one year, and Boston players are confident that he has what it takes to...
BOSTON, MA・7 HOURS AGO

Cavaliers guard Ricky Rubio, who suffered a torn left ACL last December, is hopeful he can return to action this December but won’t put a timetable on it, Chris Fedor of the Cleveland Plain Dealer writes. “I wanted to be ready for training camp but I knew it was...
CLEVELAND, OH・53 MINUTES AGO
CBS Boston

BOSTON -- Monday was much more than just Celtics Media Day for Joe Mazzulla. It was also the first day that he addressed the collective press as the interim head coach of the Boston Celtics.The 34-year-old Rhode Island native will be the main man on the Boston bench for the upcoming season, taking over for the suspended Ime Udoka. It's not the most glamorous way for a guy to get his first NBA head coaching gig, but Mazzulla says he's ready for what's ahead. Or at least he's as ready as he can be at this point in time."You're never...
BOSTON, MA・9 HOURS AGO
CBS Boston

FOXBORO -- Before the Patriots game was even over, Sunday fans were seen flowing out of the stadium and into the parking lot. They had seen enough. "I would say this year is a rebuilding year, but we will get back there," said Max Meallo, of Pembroke. He was just one of the Patriots fans who made their way to Gillette Stadium for this season's home opener. "It's a tough loss. Mac shows a lot of promise," said Meallo. "He didn't have the time that he needed. But we look good, still keeping the faith and everything but just a tough game." Diego...
BOSTON, MA・23 HOURS AGO
CBS Boston

BOSTON  -- It felt inevitable for a while, but the Red Sox were officially eliminated from playoff contention on Sunday night.The Sox were eliminated after losing to the Yankees, 2-0, in a rain-shortened affair in the Bronx. That outcome gave the Yankees a series-sweep, and a 13-6 record over Boston overall this season.If you're looking for any ray of sunshine from the weekend, at least the Red Sox didn't give up a record-tying homer to Aaron Judge during the series.   Sunday's loss dropped the Red Sox to 72-80, and they seem destined to finish in last place in the AL...
BOSTON, MA・13 HOURS AGO