A father has accused a Kansas City water park of racism after it abruptly called off the birthday party for his son when 500 people allegedly arrived and made staff feel 'uncomfortable.'

Chris Evans said he signed a $2,000 contract with Summit Waves Aquatic Facility in Lee's Summit to host 250 people for his 17-year-old son's birthday party on Saturday, but officials said a crowd twice the size appeared.

At a news conference on Tuesday, Evans said his family was told 'this event doesn't represent Lee's Summit Waves' and that his reservation was canceled because a park official was 'uncomfortable.'

A video of the heated argument with the Evans family and a park employee shows the family demanding an answer, with the official not giving a clear response as she's flanked by police officers.

'If this was a large group of white folks, there wouldn't be a problem,' a family member tells the employee, who shakes her head no as the park denies the allegations.

Evans says: 'I know you don't know us, I just want to know why you're uncomfortable with us.' 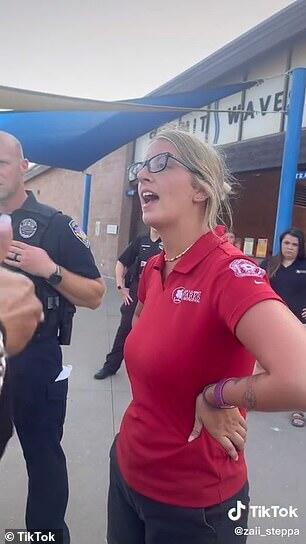 Lee's Summit Parks and Recreation Department, which operates the water park, said in a statement issued Tuesday that it apologized to the Evans family because of miscommunication and missed processes that led to the cancellation.

The statement said its investigation found the department failed to arrange additional security for the party, which Evans paid for as part of his contract.

Parks officials said the family also promoted the event on social media despite the contract stating that would not happen.

Park department officials said up to 500 people showed up in the parking lot for the party, with the park having a size capacity limit of 600.

But Evans claimed the event was canceled before the teenagers arrived and there was 'never anything close to 500 kids in the parking lot.'

'My kids were heartbroken that the party was canceled,' he said. 'They are good kids who make good grades, have bright futures and do not deserve to be treated like this. And that goes for all the kids at the park that day.'

'It appears to have been canceled simply because the park staff was uncomfortable with a group of Black teenagers having a pool party to enjoy the end of the summer,' Evans said during Tuesday's conference.

Officials said they grew worried about the event after other parents called asking about party details and safety concerns due to the size.

After several unsuccessful efforts to reach the Evans prior to their arrival, the department decided to cancel the party, according to the statement.

'Safety pertaining to the anticipated crowd size and the potential impact it might have on party guests and the staff was the sole reason for the cancellation,' the statement said.

Lee's Summit Mayor William Baird on Tuesday criticized the department's handling of the incident and denounced 'appalling' statements he said a park employee made on social media after the incident.

'We must intentionally embrace a culture that is welcoming and inclusive, and we must continually denounce any urge or impulse to exclude,' he said.

The parks department's statement on Tuesday said its administrator apologized to the Evans family for 'the inappropriate and insensitive language' used by staff and said appropriate actions would be taken.

The department said it would review its rental processes, including communication, and improve training to align with the city's diversity and inclusion efforts.

'A sincere apology is owed to the Evans family and our Lee's Summit community,' Lee's Summit Parks and Recreation said in a statement. 'LSPR strives to be a respectful and inclusive organization where all members of our community feel welcome and appreciated.

'Inappropriate language, social media posts and behavior are not acceptable and will not be tolerated.'

The incident comes amid backlash against Sesame Street's themes park and Chuck E. Cheese, where black parents claimed their children were snubbed by costumed mascots due to their race. 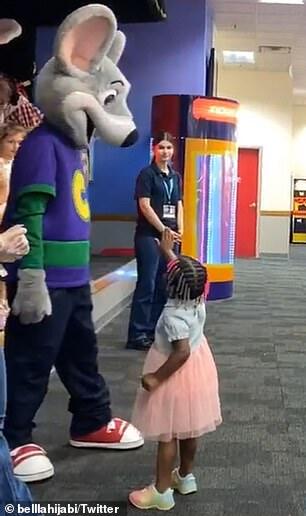 Earlier this week, Naney D. Muhammad told TMZ she was unimpressed by an apology she was given by Chuck E. Cheese corporate and that she planned to litigate to find some resolution against a chain in Wayne, New Jersey.

In it, Cheese could be seen handing out a hearty helping of high fives to a stage full of white children, before seemingly completely ignoring the ebullient and jubilant black two-year-old at his feet.

'My 2-year-old was racially discriminated against,' Muhammed wrote with the video, 'As you can see, he gives all of the yt kids hi-5s and PURPOSELY ignored my black baby.'

The latest lawsuit announcement comes after the family of the two girls who were seemingly snubbed by a character at a Sesame Place in Langhorne, Pennsylvania, revealed they were suing the park for $25million.

'Just looking at her face, it makes me want to cry every time I see it,' the girls' father Quinton Burns said during a press conference announcing the suit.

In that video, the two black girls from New York were passed over by the character Rosita, who had just moved on from interacting with a number of white children.

Sesame Place apologized in a statement for that incident and explained that the actor inside the costume simply couldn't see the girls due to the actor's limited field of vison.

glad it wasnt racism, their policy was no posting on social media, and someone did. Stop calling racism when stuff happens, make sure to check yourself first, makes people of race look bad when we hollering It was racism. And per the facts I read it was not.

After the earlier allegations against theme parks being racist then theme restaurants were quickly accused and now we're back to theme parks. Everything that happens isn't racially motivated or lawsuit worthy. All these allegations have happened to every skin color, sex, age group, religion, etc etc. But there is one group that thrives on bringing race into every incident that happens and working to hard at building a divide. Sometimes things happen and it's not because anyone's purple or green.

The cancellation actually teenagers’ lives! Yes, it was a breach of contract and security for attendees. Teach your teen about contracts.