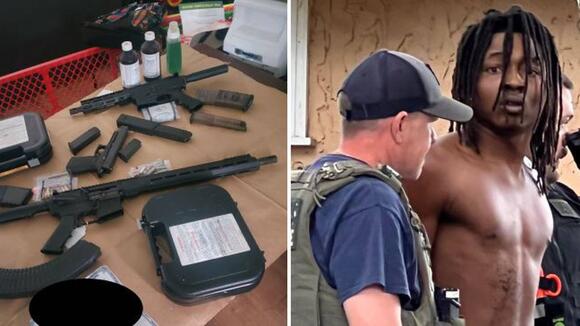 BUTTS COUNTY, Ga. — A Georgia man who was wanted for six drive-by shootings in Butts County has been taken into custody.

Jaquavius Kesean Bland is a known member of the Bloods street gang, according to Butts County Sheriff Gary Long.

On Saturday, Bland allegedly opened fire on a car in Flovilla, Ga. with three women inside. Thankfully, no one was hurt.

Sheriff Long says that Bland was also wanted for five other drive-by shootings in Jackson and Flovilla.

“I want to send a very strong message to these cowardly gangs, it’s members and associates; identifying and arresting everyone in your gang is my number one priority. I promise you that my Deputies will not stop until we completely dismantle your gang and everyone that is assisting in furthering your criminal enterprise,” said Sheriff Long.

Bland’s exact charges have not been specified.

“If you are a gang member, a known associate or considering this thuggish life style, you might want to find another county to conduct this cowardly behavior in,” the sheriff continued.

Sad thing is, this coward will be out in no time...killing again....thanks to our pathetic excuse for a judical system.

Calling a drive by shooter a coward is only going to make these young boys do more blantant acts to prove them wrong. Whoever they interviewed did a terrible job with their statements.

CLAYTON COUNTY, Ga — Clayton County police are seeking help to find two men connected to the shooting death of a teenager outside a barbershop. In April, gunshots broke out at a shopping center off River Station Boulevard. Police said Anthony ‘China’ McClain, 17, was an innocent bystander who got caught in the crossfire.
CLAYTON COUNTY, GA・1 HOUR AGO
WSB Channel 2 Atlanta

COBB COUNTY, Ga. — Police say that an attack at a Cobb County storage unit couldn’t be crazier if you scripted it for a movie. Channel 2′s Cobb County Bureau Chief Michele Newell was at a storage facility on Cobb Parkway, where police were called out to reports of someone banging on storage units with a hammer.
COBB COUNTY, GA・16 HOURS AGO
WSB Channel 2 Atlanta

COBB COUNTY, Ga. — Channel 2 has exclusive police body camera video showing the moment officers arrested a man accused of exposing himself to multiple people across metro Atlanta. We first told you about Mark Stubblefield on WSB Tonight. Now we’re hearing from one of his alleged victims.
COBB COUNTY, GA・1 DAY AGO

Man accused of boarding up home to hold mother, wife, and children captive in Barrow County

A man in Winder is facing several charges. The Barrow County Sheriff’s Office says Thomas Brantley boarded up the doors and windows of his home to trap his wife, four children, and elderly mother inside. [DOWNLOAD: Free WSB-TV News app for alerts as news breaks]. The wife and four...
BARROW COUNTY, GA・1 DAY AGO
WSB Channel 2 Atlanta

GWINNETT COUNTY, Ga. — A 19-year-old is now facing gun charges after police caught him walking around a Gwinnett County school with a shotgun. Channel 2′s Audrey Washington was at Archer High School Wednesday, where police said Brian Garfield Fort was spotted on campus with a shotgun during a football game over the weekend.
GWINNETT COUNTY, GA・17 HOURS AGO

BIBB COUNTY, Ga. — The Bibb County Sheriff’s Office is investigating a fiery traffic accident that left a mother and her two children dead. BCSO said at 2 p.m. on Sunday that a black Chevrolet SUV was going southbound on I-475 just past the Thomaston Road bridge when it went off the roadway and hit a tree.
BIBB COUNTY, GA・2 DAYS AGO
WSB Channel 2 Atlanta

COBB COUNTY, Ga. — A man was arrested and jailed over the weekend for trespassing in a Cobb County neighborhood, police said. On Oct. 1, Cobb County police responded to Atlanta Country Club Estates, off Paper Mill Road in East Cobb, where they arrested Mark Jason Stubblefield, 52, on one count of criminal trespass. A judge set his bond at $1,320. As of Monday night, he remained in jail.
COBB COUNTY, GA・2 DAYS AGO
WSB Channel 2 Atlanta

DOUGLAS COUNTY, Ga. — The family of 17-year-old Yaron Kathuri is hoping for answers on where he is. They held a prayer vigil for Kathuri. He was last seen at the Arbor Place Mall in Douglas County. “He’s been missing for a week,” said his mother, Vera Kathuri....
DOUGLASVILLE, GA・9 HOURS AGO
WSB Channel 2 Atlanta

GWINNETT COUNTY, Ga. — The Gwinnett Police Department is investigating the shooting death of a teenager at a local mall officials said. Police responded to a person shot call just after 8 p.m. Wednesday evening. When they arrived, they found the victim, 17-year-old Elijah Dewitt of Jefferson was dead...
JEFFERSON, GA・11 HOURS AGO

GWINNETT COUNTY, Ga. — Gwinnett County police are investigating a robbery after a Lilburn pawn shop was robbed on Saturday. Police tell Channel 2 Action News they were able to get a photo of the possible suspect they believed robbed the Cash Advance Pawn located on US-78 from video surveillance footage.
GWINNETT COUNTY, GA・1 DAY AGO
WSB Channel 2 Atlanta

ATHENS, Ga. — A University of Georgia freshman is in jail after police say he made terroristic threats on a social media app. Police confirmed to Channel 2 that they arrested 18-year-old Stuart Harris over the weekend. [DOWNLOAD: Free WSB-TV News app for alerts as news breaks]. According to...
ATHENS, GA・2 DAYS AGO
WSB Channel 2 Atlanta

ATLANTA — It’s a growing problem that is impacting our local health care facilities — nurses are being attacked by patients. Channel 2 Action News first reported on the danger local nurses face in 2019, but a new analysis has found that nurse attacks are on the rise with an average of two nurses being attacked every hour in the United States.
MARIETTA, GA・17 HOURS AGO
WSB Channel 2 Atlanta

More than 1,000 cars stolen off the streets of Atlanta in just 5 months, police say

ATLANTA — In just the first five months of 2022, Atlanta police say more than 1,000 cars were stolen off of the streets. Police say that more than half of those cars with the keys still inside or with the car already running. To put the 1,065 stolen cars...
ATLANTA, GA・1 DAY AGO
WSB Channel 2 Atlanta

Some parents say it sent their hearts racing when they learned someone fired shots near their children’s school as they played outside. The school had to go into a soft lockdown. It happened Tuesday at Roberta T. Smith Elementary in Rex on Highway 42. Students were on the school’s...
REX, GA・16 HOURS AGO
WSB Channel 2 Atlanta

HENRY COUNTY, Ga. — Two suspects are in custody after a home invasion, shooting and chase in Henry County. Henry County police said officers responded to a home in the Locust Grove area around 1:45 p.m. Tuesday. [DOWNLOAD: Free WSB-TV News app for alerts as news breaks]. When they...
HENRY COUNTY, GA・1 DAY AGO