The American Airport With the Most Cancellations 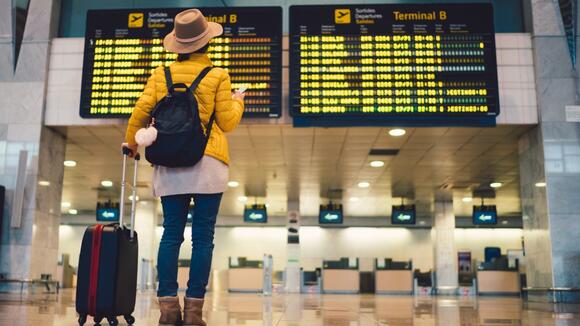 Flying has been a nightmare for months. Airport delays and flight cancellations have been caused by pilot and crew shortages, bad weather and inadequate reservation systems. The industry was not prepared for the surge in customer demand after it almost disappeared due to the COVID-19 pandemic. Many planes were put out of service and had to be brought back online. Some carriers even have offered pilots who retired bonuses to return to service.

Customer satisfaction has plunged. For carriers, it does not matter. Demand is so great that even disgruntled passengers will get on flights. Violent incidents involving passengers have not throttled back the number of people who want to travel by air.

Delays and cancellations are much worse at some airports than others.

Bloomberg reports that AirHelp made a survey of 37,000 cancellations across 400 U.S. airports from May 27 through July 15. This includes the heavy Memorial Day and July 4 weekends, well known for heavy travel. The average number of flight cancellations by airport was 2.6%.

The two airports with the worst cancellation rates serve the greater New York City area. The first is LaGuardia, named after a New York City mayor. It has an odd place in America’s airport systems. Its short runways do not allow it to service large jets. Therefore, it gets no traffic from the west coast or overseas. It is close to the city and known for crowded parking, lengthy check-in lines and unusually long periods to get through security checks. Of the outgoing flights from LaGuardia in the measured period, 7.7% were canceled.

The airport with the second highest number of cancellations only became a major airport for New York travelers a few decades ago. Newark Liberty International airport is well outside the city. It was once rarely used for passenger planes. Today, it serves many people from the west side of New York and the parts of New Jersey that are in the metro area. A total of 7.6% of the flights out of Newark were canceled.

Interestingly, the third major New York airport, the John F. Kennedy International, was not among the top 10 airports with the highest cancellation rates.
ALSO READ: This Is the Best US Airport for Summer Travel
The other airports with the worst cancellation rates are scattered across the country, from Washington to Cleveland to Miami. No matter what the location, the problem is bound to get worse.

Hahahaha New York makes the top mark at the bottom. Is anyone surprised?

Most airlines treat passengers as baggage, Yes, the plane has to be full in order for the company to make money, but aside from making sure you get onboard, everything else is pretty irrelevant. The big airlines, of course, don't ever say this -- just like your cable company won't...
LIFESTYLE・2 DAYS AGO
BIN: Black Information Network

‘Something We Haven’t Seen In Our Lifetime': Hurricane Ian Approaches U.S.

Tampa, Florida may receive its first direct hit from a hurricane since 1921, forecasters warn.
FLORIDA STATE・21 HOURS AGO
AccuWeather

Hurricane Ian is projected to continue rapidly strengthening after moving over Cuba, and AccuWeather forecasters have rated the storm a 3 on its RealImpact Scale for hurricanes when it slams into Florida due to threats including excessive rainfall, storm surge, winds and even severe weather. But, Ian’s impacts will be far from over in the United States.
FLORIDA STATE・1 DAY AGO
24/7 Wall St.

The Largest Lakes in America

A recent analysis reveals that a carrier from one of the world’s poorest nations has the worst customer service in the world.
TRAVEL・1 DAY AGO
24/7 Wall St.

The Most Affordable City to Own A Home

Home prices have skyrocketed in the last two years, although mortgage rate increases have slowed the increases down. Cities with relatively poor populations are the most affordable places to own a home. This list, based on new research, is topped by Toledo, Ohio, one of America’s dying industrial cities. It is also among U.S. cities […]
TOLEDO, OH・2 DAYS AGO
24/7 Wall St.

States Where the Most People Have Gone to College

A college education has long been a key driver of upward economic mobility in the United States – and the share of Americans with a four-year college degree is on the rise.   According to newly released estimates from the U.S. Census Bureau’s American Community Survey, 79.9 million American adults, or 35% of the nation’s 25 […]
COLLEGES・4 DAYS AGO
Reuters

WASHINGTON, Sept 27 (Reuters) - The U.S. Transportation Department (USDOT) said on Tuesday it has approved the electric vehicle charging station plans for all 50 states, Washington and Puerto Rico covering about 75,000 miles (120,700 kms) of highways.
POLITICS・25 MINUTES AGO

States Where the Most People Live Below the Poverty Line

The share of Americans living below the poverty line fell each year from 2012 to 2019 – declining from 15.9% to 12.3% over the eight-year period. Though disruptions relating to the COVID-19 pandemic prevented the release of 2020 estimates, new census data reveals a reversal of the longer-term trend. According to the U.S. Census Bureau’s […]
POLITICS・21 HOURS AGO
24/7 Wall St.

Hurricane Ian could be the most powerful storm to hit south Florida in over a century.
TAMPA, FL・2 HOURS AGO