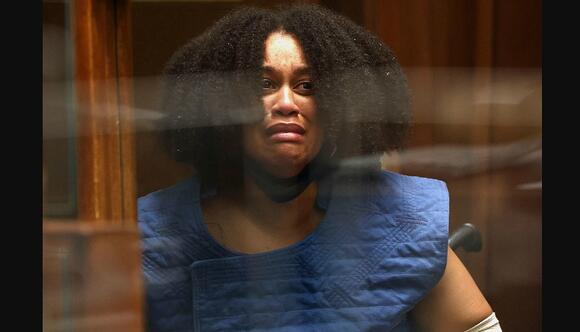 Details continue to emerge in the case of a Houston nurse who killed 6 people, including a family of 4, following a disturbing car crash near Los Angeles last week.

37-year-old Nicole Linton appeared in court on Monday. She has been charged with six counts of murder and vehicular manslaughter. She did not enter a plea and is being held without bail in California.

Prosecutors say Nicole was going 90 miles per hour last Thursday when she plowed through a clear red light at a busy intersection, setting several vehicles on fire. A pregnant woman, her 11-month-old son, and her boyfriend were killed in one vehicle, while 2 women were killed in another.

California authorities say Linton was not drunk or under the influence of any drugs at the time of the accident, but her driving history is quite extensive. California Highway Patrol says that Nicole Linton has 13 previous crashes on her record, including a 2020 accident that totaled two cars and caused bodily injuries.

Linton’s defense team says she has profound mental health issues but did not say if those issues were linked to the cause of the crash, which makes the fact that she is a traveling nurse all the more disturbing.

If convicted on all counts, Nicole Linton could face up to 90 years in jail.

How is it that the one causing the deadly crash walks away. After all those injured and deceased people I don't see how she survived!!. Don't make sense.

I would Sue Harris County and the city of Houston for allowing her to have a driver's license and a car. How in the world does she afford insurance with that type of driving record? Imagine her being your nurse? How many other DUI's did she have or did they reduce them all to parking tickets.

sounds like her defense team is laying the groundwork for some alternative excuse for her behavior. I hope we get a smart jury on this and see through the BS and focus on what she has caused because she made poor choices and decisions. when you look at that crash it's indefensible for anything except for negligence, she was speeding the light had clearly been red for a few seconds and she just plowed through. the defenses response are excuses not reasons for what she caused.

The car belonging to a Texas teacher who hasn't been seen since Thursday of last week was found in New Orleans.
NEW ORLEANS, LA・2 DAYS AGO
99.9 KTDY

Watch Hurricane Ian Livestream Cams As It Slams Into Florida

Ian intensified quickly overnight with wind speeds only two mph away from being a Category 5 hurricane.
FLORIDA STATE・1 DAY AGO
99.9 KTDY

A large helicopter, a Leonardo AW139 registered as N811TA, was forced to make an emergency landing Sunday evening in Houma-Terrebonne, Louisiana.
LOUISIANA STATE・2 DAYS AGO

Lafayette Man Hit and Killed While Walking Along Highway in St. Martin Parish

Louisiana State Police said a Lafayette man was struck and killed while walking along a highway in St. Martin Parish on early Sunday morning.
LAFAYETTE, LA・3 DAYS AGO
99.9 KTDY

A train hit a police unit that was parked on the tracks and when the train slammed the unit, a suspect was detained in the vehicle.
PLATTEVILLE, CO・5 DAYS AGO
99.9 KTDY

One scene out of Florida is a result of the strong storm surge, as a shark has been spotted swimming through a Fort Meyers neighborhood.
FLORIDA STATE・1 DAY AGO
99.9 KTDY

A gut-wrenching video of a state police officer assisting a veteran has gone viral.
4 DAYS AGO

There are three heavily-traveled roadways that have lane closures happening this week - Interstate 10, US 90, and Verot School Road.
HENDERSON, LA・3 DAYS AGO
99.9 KTDY

Cruelty Issues with Animals to Be Dealt With By New Investigator in St. Landry Parish

Ian Becomes a Hurricane, Has Its Eye on Florida

Could Louisiana Gas Prices Rise Again Because Of Hurricane Ian?

Gas prices have been ticking down, but could Hurricane Ian impact that?
LOUISIANA STATE・1 DAY AGO
99.9 KTDY

The winning ticket was purchased at a RaceTrac gas station on LA 73 in Geismar this past Saturday, September 24.
BATON ROUGE, LA・2 DAYS AGO
99.9 KTDY

A storm approaching the Gulf could have south Louisiana implications.
LOUISIANA STATE・7 DAYS AGO