Graphic details released about N.O. mother accused of slitting the throats of her young children 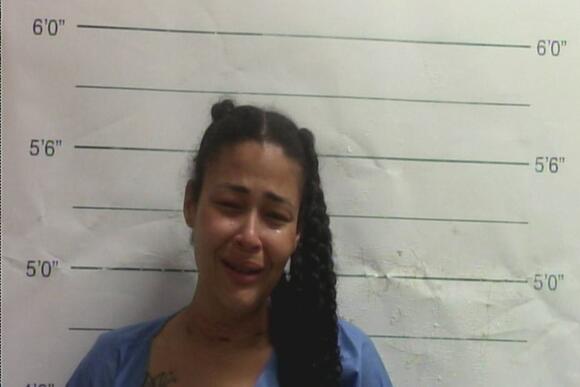 Arrest records obtained by WWLTV detail the horror Jermaine Roberts experienced as the mother of his two young children allegedly slit the throats of their kids and then confesses to him in a video call.

Janee Pedesclaux is accused of slitting the throat of her four-year-old daughter Paris Robert, and her 2-year-old son Jay'Ceon Roberts.

Police records say the children’s father, Jermaine Roberts, received a Facetime video call from Pedesclaux allegedly admitting to cutting the throats of their children and focused the camera on their son who appeared to have blood on his neck. Roberts got a second video call showing their daughter lying in a bed with blood on her neck and gasping for air.

Roberts then got a third video call from Pedesclaux showing both children bleeding from the neck.

Roberts called 911 and drove over to Pedesclaux’s New Orleans home on Law Street where she had barred him from coming in, saying “We gone. It’s over with,” according to police reports as reported by WWLTV .

Roberts then broke a window to enter the home where he allegedly found Pedesclaux with a knife in her hand, the two-year-old face down in the bed in a pool of blood, and the four-year-old in a bed bleeding and foaming at the mouth.

The report also says she allegedly bit Roberts and ran to the kitchen to get another knife but Roberts quickly picked up his lifeless children and rushed them to University Medical Center. The children underwent multiple surgeries in an attempt to save their life. Paris Robert eventually died from her injuries and Jay'Ceon Roberts is currently in critical condition.

The report says Paris had a cut on her throat down to the spine and Jay’Ceon had a cut to his throat and several cuts to his chest, arms, both legs, and fingers.

Police say during the incident Pedesclaux also posted a video to social media saying, "I'm done, my children is dead! I'm done. I'm done. And it's all Jermaine fault! It's always Jermaine fault! I'm done! I'm killing myself! I'm done,” according to the report.

Pedesclaux and Roberts were in a child custody dispute where Roberts sued for joint custody back in April saying Pedesclaux was “not stable or providing a healthy environment for the kids,” according to court records.

"On Sunday morning the Pedesclaux family endured an unspeakable tragedy. Mental health is a crisis that is affecting every family and ours is no different. The lack of mental health services and the toxic mix of social media has added to the problems we face as a community. This is a large family of faith and we ask with all humility that the city pray for our family and for our Paris and Jay’Ceon."

A wise King once said to feuding women: "Ok, cut this baby in half and give half to each." One screamed no, please no. The King knew instantly who the child belonged to.

What an unbelievable thing this "mother" has done.I feel so bad for the daughter losing her life but even more for the son because if he survives this,he has to walk around this earth the rest of his life knowing that he has that scar across his throat that was caused by his "mother" attempting to kill him.

Sadly, love may mean not having custody. Some women, and men, don't understand that concept. Bless and give the father strength and peace.

The boy was rushed to hospital but was later pronounced dead.
HOUSTON, TX・13 HOURS AGO
WWL-AMFM

The St. Bernard Parish Sheriff’s Office today announce the arrest of a man wanted in New Orleans for armed robbery. Police say Markall Swearington robbed a woman he had met to purchase an item she was selling.
VIOLET, LA・5 DAYS AGO
Fatim Hemraj

When Karla Rodriguez vanished from her Las Vegas neighborhood in 1999, investigators called her a “victim waiting to happen.” Not only was she a vulnerable 7-year-old with a medical condition who spoke limited English, but Karla’s parents often left her unsupervised, to fend for herself.
LAS VEGAS, NV・6 HOURS AGO
WWL-AMFM

In Marrero last night a man was shot in the 6200 block of 4th street around 11pm. The Victim was able to make it to the 1300 block of Silver Lilly Lane before succumbing to his gunshot wounds.
MARRERO, LA・2 DAYS AGO

Mother arrested in Houma after child thrown from bridge

A Houma woman is charged with attempted first degree murder after Houma police say she threw her child off of the Liberty St. Bridge.
HOUMA, LA・2 DAYS AGO
Popculture

According to several social media outlets, Basketball Wives star Brooke Bailey has suffered a tragic loss. The Instagram account [thebbwteainc] reports that sources have confirmed Bailey's daughter Kayla has died after sustaining injuries in a car accident. The accident reportedly happened on the evening of Saturday, Sept. 25. Bailey hasn't spoken publicly, and details of the accident have not been released. However, fans and viewers have been flooding the comment section of her posts with condolences. Bailey reportedly has three children in total. It's unclear of her daughter Kayla's age, as Bailey rarely shows family moments on her social media. She has changed her bio to include a tribute to Kayla, writing, "Kayla Nicole Bailey 3/2/97 – 9/25/22" along with a purple heart and dove emoji. She also shared a post featuring photos of Kayla throughout the years.
ACCIDENTS・1 DAY AGO
WWL-AMFM

Oliver Thomas announced on his radio show Wednesday that his niece was one of the victims in that shooting on Chef Menteur Highway near Plum Orchard Road.
NEW ORLEANS, LA・5 DAYS AGO
WWL-AMFM

The Tangipahoa Parish Sheriff’s Office has identified one suspect in a deadly home invasion in Hammond. Deputies are looking for 18-year old Omarion Hookfin.
HAMMOND, LA・3 DAYS AGO

New Orleans Police are investigating a shooting in the Holy Cross neighborhood of the Lower Ninth Ward. According to the Public Information Officer a man arrived a hospital around 11pm with a gunshot wound.
NEW ORLEANS, LA・3 DAYS AGO
WWL-AMFM

Cops are looking for clues after a man was shot and killed in Lafourche Parish. Sheriff Craig Webre says detectives are investigating the shooting that occurred overnight in Raceland.
RACELAND, LA・1 DAY AGO
WWL-AMFM

There is no slow down in the rate of killings in New Orleans as the city has claimed the dubious title of America’s murder capital. In fact, the pace is increasing. New Orleans Police have reported more than a murder a day this week.
NEW ORLEANS, LA・4 DAYS AGO
WWL-AMFM

A trio of inmates are now facing additional charges for a recent escape from the Lafourche Parish Correctional Complex. Leroy Miles Jr., 23, was captured on Saturday following his escape.
TERREBONNE PARISH, LA・3 DAYS AGO

JPSO is investigating another murder on the Westbank. Sheriff Joe Lopinto says there was another homicide in Marrero Sunday night. A man was killed, the fourth person shot dead there in about 48 hours.
MARRERO, LA・10 HOURS AGO
WWL-AMFM

More bullets flying on the I-10

There’s been another shooting on the interstate in New Orleans. It happened Sunday afternoon, shortly before 2:00pm. Initially police did not report the shooting as having happened on the I-10, but today confirmed it did occur on the interstate.
NEW ORLEANS, LA・7 HOURS AGO
WWL-AMFM

New Orleans Police homicide detectives are investigating a double shooting with at least one fatality in the 7100 block of Chef Menteur Hwy.
NEW ORLEANS, LA・6 DAYS AGO
WWL-AMFM

Five shootings in less than 15 hours in New Orleans

New Orleans Police are investigating a rash of shooting from Saturday morning until early Sunday. The latest happened shortly before 1:00am. “An adult male arrived at the hospital with a gunshot wound to his back
NEW ORLEANS, LA・1 DAY AGO
WWL-AMFM

The New Orleans Police Department is investigating two cases where apparent panhandlers attacked people who declined to give them money.
NEW ORLEANS, LA・5 HOURS AGO
WWL-AMFM

A violent weekend in the city of New Orleans continues as the New Orleans Police Department investigates the city’s fourth shooting in 24 hours.
NEW ORLEANS, LA・1 DAY AGO
WWL-AMFM

Patrick Dennis said he went to court for what he thought was the suspect’s trial. That’s when he learned that the teen had been found not guilty.
NEW ORLEANS, LA・6 HOURS AGO
WWL-AMFM

Sheriff Joseph Lopinto says deputies found the wounded victims inside a car outside of a home when they arrived on scene. The victims pronounced dead at the scene.
MARRERO, LA・1 DAY AGO