1 dead, 2 injured in major crash that shut down Highway 31 in Calera 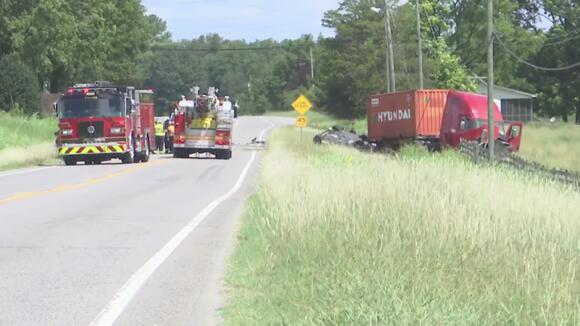 CALERA, Ala. ( WIAT ) — A major accident involving two vehicles and a tractor-trailer has a portion of Highway 31 temporarily shut down.

Calera Fire Chief Sean Kendrick confirmed to CBS 42 that one person has died in the accident and two others sustained injuries. The injured were transported to a local hospital for treatment.

Shelby County Coroner Linda Evans released the identity of the casualty in the crash as 24-year-old Jacqueline Grace Beverley.

According to the Calera Police Department, Highway 31, just north of Highway 70, is still shut down as of 4 p.m. but should reopen soon.

Stay with CBS 42 as this is a developing story.

Money says that witnesses reported that the woman was walking in an unlit area of the roadway when she was struck by an oncoming vehicle.
FAIRFIELD, AL・20 HOURS AGO
CBS 42

1 dead, 5 injured in early morning crashes along I-59 near Springville

SPRINGVILLE, Ala. (WIAT) — A series of accidents along I-59 South involving multiple commercial vehicles left one person dead and at least five others injured Wednesday morning. According to Springville Fire Chief Richard Harvey, the first crash occurred around 4 a.m. Wednesday near mile marker 152 when a commercial vehicle crossed the median and hit […]
SPRINGVILLE, AL・1 DAY AGO
CBS 42

CENTER POINT, Ala. (WIAT) — Jefferson County Sheriff’s Office announced they have multiple suspects in custody following a shooting death in Center Point Thursday. At approximately 4:38 p.m., JCSO deputies were dispatched to the Charter East Apartments on reports of a person shot. Upon arrival, deputies found a male victim at the scene, who was killed […]
CENTER POINT, AL・11 HOURS AGO

The shooting occurred in the 7500 block of Georgia Road near Georgia Road Fish and Wings.
BIRMINGHAM, AL・19 HOURS AGO
CBS 42

One person was shot by a Decatur Police officer during an altercation at a pharmacy Tuesday.
DECATUR, AL・1 DAY AGO
CBS 42

Accident shuts down all lanes on I-59 in St. Clair County, expect major delays

Those lanes will be closed for an undetermined amount of time, so drivers should expect major delays.
SAINT CLAIR COUNTY, AL・2 DAYS AGO
CBS 42

Man dead after being hit by train in Birmingham

BIRMINGHAM, Ala. (WIAT) — A man was killed by a train Tuesday afternoon in Birmingham. According to the Birmingham Police Department, officers received a call around 4:46 p.m. of a pedestrian struck by a train near 15th Place SW and Pearson Avenue, near Elmwood Cemetery. Birmingham Fire and Rescue arrived at the scene and pronounced […]
BIRMINGHAM, AL・2 DAYS AGO

TUSCALOOSA, Ala. (WIAT) — An arrest was made Monday in connection to a deadly car crash that killed three people one year ago in Cottondale. Tuscaloosa County jail records show that Braxton Connell, 34, was arrested and charged with three counts of criminally negligent homicide and one misdemeanor count of possession of drug paraphernalia. He has […]
TUSCALOOSA COUNTY, AL・2 DAYS AGO
CBS 42

Tuscaloosa Police officers save man from jumping from bridge

TUSCALOOSA, Ala. (WIAT) — Several Tuscaloosa Police Officers are receiving praise after helping save a man who threatened to jump from an overpass bridge Monday night on University Boulevard near DCH Regional Hospital. Corporal Tre Brown was one of the officers who responded to the bridge. “It’s always rewarding when these are the parts of […]
TUSCALOOSA, AL・1 DAY AGO
CBS 42

TUSCALOOSA, Ala. (WIAT) — There’s a new exciting space now open in Tuscaloosa, which is the precursor to the Saban Center. Terry Saban joined city leaders for the ribbon cutting for the River District Park located downtown. “This park is part of what’s happening,” Saban said. “We’ve cut lots of ribbons since we’ve been here and […]
TUSCALOOSA, AL・9 HOURS AGO
CBS 42

BIRMINGHAM, Ala. (WIAT) — In the wake of Hurricane Ian, those in Northport, Alabama, are doing what they can to help people in North Port, Florida. On Wednesday, Northport Mayor Bobby Herndon and six other volunteers traveled to Florida to deliver supplies to aid disaster relief efforts. This is Northport’s 11th year helping with disaster […]
NORTHPORT, AL・1 DAY AGO

Chino's Taco Stop came by the CBS 42 Morning News to get us in a good food mood for Food Truck Thursday.
BIRMINGHAM, AL・22 HOURS AGO
CBS 42

An inmate was stabbed to death Monday at William E. Donald Correctional Facility in Bessemer, marking the second inmate to be killed at the prison within a week.
BESSEMER, AL・2 DAYS AGO
CBS 42

BIRMINGHAM, Ala. (WIAT) — On Thursday, both the state and defense rested their case, leaving the fate of a man accused of kidnapping and murdering a 3-year-old girl to a jury. Patrick Stallworth is accused with his girlfriend, Derick Irisha Brown, of kidnapping and killing Kamille “Cupcake” McKinney during a party at Tom Brown Village […]
BIRMINGHAM, AL・12 HOURS AGO
CBS 42

Emotional testimony over the death of a 3-year-old girl who had been kidnapped days before her body was found in a dumpster were heard during the federal trial over one of her accused kidnappers.
BIRMINGHAM, AL・1 DAY AGO

Beyond the badge: Pelham connects community with resources for all emergencies

PELHAM, Ala. (WIAT) — When there is a crisis, first responders are there to help – a message at Tuesday’s National Night Out. But sometimes, those emergency calls require someone other than a paramedic, firefighter or police officer. Mental health and addiction are issues Pelham officials attempting to get ahead of by working with the […]
PELHAM, AL・2 DAYS AGO
CBS 42

PELL CITY, Ala. (WIAT) — A Pell City sixth grader is expelled after officials discovered a death list in the student’s notebook. This comes just weeks after a similar incident at Hewitt-Trussville High School was made public.  The police chief and superintendent tell CBS42 that student safety is a top priority for Pell City Schools, […]
PELL CITY, AL・1 DAY AGO
CBS 42

‘The superintendent is not king’: Judge will allow lawsuit by Chilton County school employees to move forward

A judge has ruled that a lawsuit against the Chilton County Schools superintendent can move forward.
CHILTON COUNTY, AL・2 DAYS AGO
CBS 42

A group in Tuscaloosa says the word "Dixie" should be removed from the University of Alabama's (UA) fight song and replaced with "a more appropriate term."
TUSCALOOSA, AL・1 DAY AGO