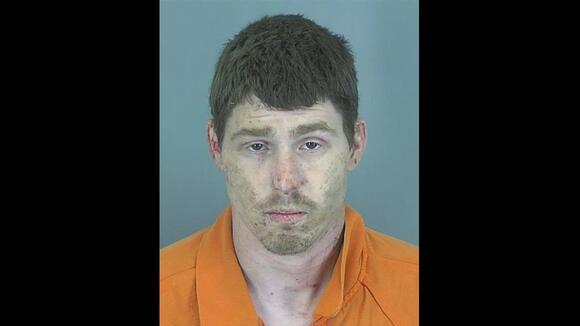 An Upstate Man has been sentenced to nearly two decades in the assault of two individuals.

30-year-old Aaron Seagraves plead guilty Tuesday to two counts of assault and battery of a high and aggravated nature and resisting arrest in connection to the violent assaults of two individuals in 2020.

The 7th Circuit Solicitor's Office announced that Seagraves was sentenced to 18 years in prison followed by five years of probation.

According to the solicitor's office, the assaults occurred at a home on Chesnee in late March of 2020. Reports explain that one of the victims was repeatedly hit with a baseball bat while the other was stabbed multiple times with a knife.

Seagraves fled the scene and was found the next day hiding in a briar patch with a knife, where he was subdued and arrested.

Suspect in Upstate murder apprehended out of state

A woman wanted for a murder in the Upstate has been apprehended out of state. Authorities say, Alexis Fiana Jones was arrested in Louisiana, Thursday after a short police chase.
UNION COUNTY, SC・2 DAYS AGO
106.3 WORD

GCSO says suspect made $7,000 worth of purchases on stolen credit cards.

An area Sheriff’s Office is looking for the public’s help in identifying a suspect. The Greenville County Sheriff’s Office says, a woman purchased $7,000 worth of goods with stolen credit cards.
GREENVILLE, SC・1 DAY AGO
106.3 WORD

The South Carolina Attorney General’s office has announced additional charges against a caregiver at NHC in Laurens. 53 year old, Ursula Marie Davis has been charged with Second Degree Assault and Battery in a July 17 incident at the facility.
LAURENS, SC・4 DAYS AGO

A body discovered in Laurens County is believed to be that of a woman who’d been reported missing, and the man who had disappeared along with her is under arrest in Colorado.
LAURENS COUNTY, SC・3 DAYS AGO
106.3 WORD

Union County authorities are hoping a tip will lead them to a woman wanted in the case of a man found dead. The incident happened on Prospect Corner Road three weeks ago. Forensic autopsy results say he was murdered.
3 DAYS AGO
106.3 WORD

One dead in Greenville County crash

The Highway Patrol reports the driver of a 2001 Dodge Truck died after running off the roadway. The single vehicle collision occurred around 8PM Wednesday, on Secondary Road 178 in Greenville County.
GREENVILLE COUNTY, SC・2 DAYS AGO
106.3 WORD

An additional charge has been announced against the suspect in the weekend death of an Upstate woman. The Greenville Police Department announced Thursday morning that 65 year old, Terry Lee Strickland is now charged with Voluntary Manslaughter.
GREENVILLE, SC・9 DAYS AGO

Two suspects are in custody following the shooting death of an Upstate woman on Staunton Bridge Road in Greenville Tuesday night. The victim has been identified as, 24 year old Ju-Keya Babb of Greenville.
GREENVILLE, SC・10 DAYS AGO
106.3 WORD

Pedestrian killed in hit and run in Greenville

A pedestrian is dead after a hit and run in the Upstate on Friday. The Greenville County Coroner’s Office has identified the deceased as, 79 year old Beatrice Miller of Taylors.
GREENVILLE, SC・7 DAYS AGO
106.3 WORD

Two dead following crash on I-85

The Highway Patrol reports two people died in a single vehicle collision on I-85 in Spartanburg County. Master Trooper James Miller says, the driver of a 2008 Infiniti SUV ran off the interstate about 6 miles north of Spartanburg.
SPARTANBURG, SC・3 DAYS AGO
106.3 WORD

17-year-old Nathan Michael Goss was reported missing early Monday morning, having been last seen on Brockman Avenue just before 1am in the Greenville area.
GREENVILLE, SC・5 DAYS AGO
106.3 WORD

The Greenville Police Department is partnering with the Bon Secours Wellness Arena today for another Fill the Cruisers Event to collect items that benefit our local schools’ kids.
GREENVILLE, SC・1 DAY AGO
106.3 WORD

A woman from the Pee Dee area of the state is dead after a crash here in the Upstate. The single vehicle wreck happened just before 10:30 Friday night in the Pickens County town of Norris.
NORRIS, SC・5 DAYS AGO
106.3 WORD

Greenville County Sheriff’s Deputies are conducting an investigation after a woman was brought by a private vehicle to Greenville Memorial just before 9 PM Tuesday night.
GREENVILLE COUNTY, SC・10 DAYS AGO
106.3 WORD

A police chief and nearly all of the rest of his department have resigned in an Upstate town. John Alexander, the Chief Of Police in Pacolet has announced his resignation. In addition, multiple other officers have resigned including a Lieutenant.
PACOLET, SC・9 DAYS AGO
106.3 WORD

Hacker arrested in Greenville after ordering 70K worth of phones

North Charleston Police have arrested a man for hacking the City of Greenville’s Verizon Business Account and having nearly $70,000 worth phones delivered to a hotel.
GREENVILLE, SC・10 DAYS AGO
106.3 WORD

Upstate student charged after threat towards school & another student

A student at an Upstate school has been charged after a threatening video surfaced online over the weekend. The Greenville Police Department was called after a student at Hughes Academy made a threat towards another student and the school.
GREENVILLE COUNTY, SC・12 DAYS AGO