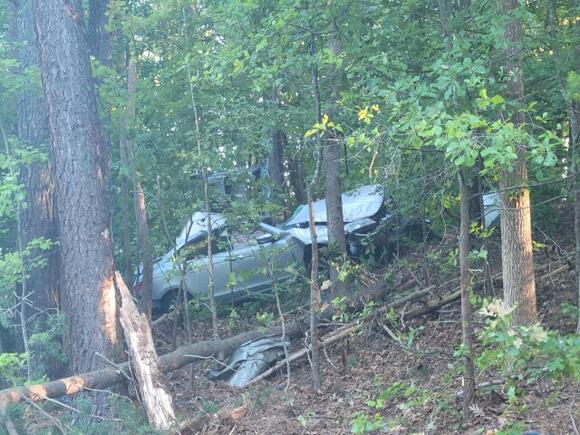 The driver of the 2012 Honda Accord, is identified as Carlos Travis Cutler, 42 of Grafton, Virginia.

According to the release, Cutler was driving at an excessive speed when he was cut off by a car that entered the left lane from the median. As a result, Cutler drove off the roadway, up the embankment, and into the tree line.

Cutler was not wearing his seat belt and was ejected out of the vehicle.

Cutler was pronounced dead at the scene.

Around 12:44 a.m., officials responded to a report of a shooting victim in the 500 block of Purlieu Drive.
NEWPORT NEWS, VA・19 HOURS AGO
WTKR News 3

Police are searching for an unknown person of interest and a known suspect after a deadly shooting in Portsmouth.
PORTSMOUTH, VA・15 HOURS AGO
WTKR News 3

78-year-old Hazel Lee Williams was last seen in the 900 block of Scott Street around 2 p.m. on Monday.
NORFOLK, VA・12 HOURS AGO
WTKR News 3

A Norfolk man has been arrested for a deadly double shooting that left a man dead on Creamer Road.
NORFOLK, VA・3 DAYS AGO
WTKR News 3

One man dead, another injured in Sunday morning shooting in Portsmouth

Portsmouth Police is investigating a gunshot wound incident near the 10th block of Carver Circle. This is an ongoing investigation.
2 DAYS AGO
WTKR News 3

According to the National Center for Missing and Exploited Children’s public database, there are roughly 500 children reported missing in Virginia.
NORFOLK, VA・1 DAY AGO
WTKR News 3

The Chesapeake Fire Department is currently on the scene of a large gas leak beside Target in the Edinburgh Shopping Center.
CHESAPEAKE, VA・19 HOURS AGO

6 forced out after fire at Suffolk home

Everyone inside the home was outside of the structure when firefighters and medics arrived. Fire crews were also able to rescue a family animal.
SUFFOLK, VA・1 DAY AGO
WTKR News 3

Chesapeake Firefighters responded to the large fire around 7:30 p.m., in the 4300 block of Bainbridge Boulevard.
CHESAPEAKE, VA・14 HOURS AGO
WTKR News 3

Hurricane Ian is far away. Why this Richmond woman is getting prepared.

According to James City County officials, strong thunderstorms in the area have caused several trees in the county to fall.
JAMES CITY COUNTY, VA・1 DAY AGO
WTKR News 3

News 3 obtained surveillance video from inside 7-Eleven in Norfolk on West Little Creek Road where three people were shot.
NORFOLK, VA・3 DAYS AGO