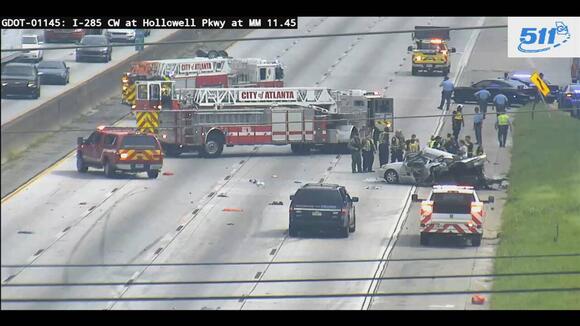 ATLANTA — A chase involving a suspected DUI driver ended in a crash that injured four people, including a 2-year-old.

The crash happened on Interstate 285 near the Donald Lee Hollowell Parkway exit.

Georgia State Patrol says a trooper was trying to pull over a black Cadillac on Interstate 20 around 10:15 a.m. Wednesday.

When the trooper turned on his lights, GSP says the driver, identified as 32-yar-old Gregory Smith, took off and a high-speed pursuit started.

The trooper said Smith led troopers to Interstate 285 and lost sight of him. As he tried to call off the pursuit, the trooper spotted Smith’s car again leaving a crash.

GSP said Smith hit a silver Toyota Camry, tractor-trailer and barrier that caused his car to overturn. Smith allegedly ran off into the woods.

Three people and a 2-year-old inside the Camry were hurt. EMS took the 2-year-old to Children’s Healthcare of Atlanta at Scottish Rite Hospital.

He is charged with fleeing, reckless driving, DUI, Move over, following too closely, serious injuries by vehicle, seatbelt, and improper lane change.

All these bad drivers in Atlanta are typically from somewhere else. We have so many people traveling through that either can't or won't read the signs.

I will never understand why someone drives under the influence. it's fine if you don't value your own life. but please value and respect others. God help their soul if a drink driver kills one of my children or spouse.

2 dead after being ejected from Jeep during police chase on I-20, GSP says

Person found dead in carport after fire in DeKalb County

ATLANTA — Early on Wednesday morning, Atlanta police arrested two men who took a vehicle from another man at gunpoint while he was pumping gas. Shortly after midnight, Atlanta police arrived at a Chevron on Donald Lee Hollowell Parkway about a carjacking, where they met with the victim, who said his car was stolen.
ATLANTA, GA・1 DAY AGO
WSB Channel 2 Atlanta

COWETA COUNTY, Ga — A Lawrenceville man who was pulled over for a traffic violation was arrested after deputies found a large quantity of drugs, including methamphetamine, fentanyl and cocaine. Deputies say they initially pulled over 42-year-old Lavar Kirkland on Sep. 23 because he wasn’t driving in his lane....
LAWRENCEVILLE, GA・11 HOURS AGO
WSB Channel 2 Atlanta

DEKALB COUNTY, Ga. — DeKalb police have arrested a man they believe is responsible for the August murder of a man picking up food. Kamaal Mogardo was found dead inside his car at the Halal Pizza and Cafe on Indian Creek Drive on August 28. [DOWNLOAD: Free WSB-TV News...
DEKALB COUNTY, GA・1 DAY AGO
WSB Channel 2 Atlanta

FORSYTH COUNTY, Ga — Dashcam video showed a Forsyth County sheriff’s deputy involved in a high-speed chase that lasted several minutes and reached triple digits in speeds before the suspect surrendered. Two cars were seen driving more than 100 mph, weaving in and out of traffic on Interstate...
2 DAYS AGO
WSB Channel 2 Atlanta

Escapee from halfway house caught, arrested as he and family were setting up for his birthday party

DOUGLAS COUNTY, Ga. — We are all in this together, and dozens of Douglas County law enforcement officers proved that by staging a special parade this week. It was all for a special little boy, 7-year-old Landon, who is having some serious medical issues. [DOWNLOAD: Free WSB-TV News app...
DOUGLAS COUNTY, GA・2 DAYS AGO
WSB Channel 2 Atlanta

COWETA COUNTY, Ga. — What deputies in Coweta County thought would be just another traffic stop became a major drug bust after they found fentanyl, cocaine, meth and more inside the car. Deputies say they were pulling over a car on I-85 just before 12:30 p.m. last week for...
COWETA COUNTY, GA・1 DAY AGO
WSB Channel 2 Atlanta

1 suspect in deaths of Cobb deputies indicted on 9 charges

COBB COUNTY, Ga.. — One of two men charged in connection with the deaths of two Cobb County deputies killed in the line of duty earlier this month has been indicted. Christopher Patrick Golden was formally indicted on Thursday on nine charges. [DOWNLOAD: Free WSB-TV News app for alerts...
COBB COUNTY, GA・1 DAY AGO
WSB Channel 2 Atlanta

COWETA COUNTY, Ga. — On Friday, a Carroll County jury found a man guilty of molestation and other charges from an investigation that began in 2020. According to the Coweta County Judicial Circuit, evidence revealed that Mark Anthony Starnes, 46, sexually abused a young girl until she was 12 years old.
CARROLL COUNTY, GA・17 HOURS AGO
WSB Channel 2 Atlanta

DEKALB COUNTY, Ga. — The family of a teen whose body was found in a DeKalb County park will lay him to rest on Saturday. DeKalb police responded to reports of a person found dead near Lithonia Park on Sept. 19. A mother and daughter walking the trails told police they found the body of Jamiren Crosby, who had last been seen a few days earlier.
DEKALB COUNTY, GA・1 DAY AGO
WSB Channel 2 Atlanta

ATLANTA — A patient at Grady Memorial Hospital has been identified after spending more than two weeks in the hospital. Hospital officials say a woman was hit by a car on September 12 on North Druid Hills Road and Kittredge Park Road. [DOWNLOAD: Free WSB-TV News app for alerts...
DEKALB COUNTY, GA・2 DAYS AGO
WSB Channel 2 Atlanta