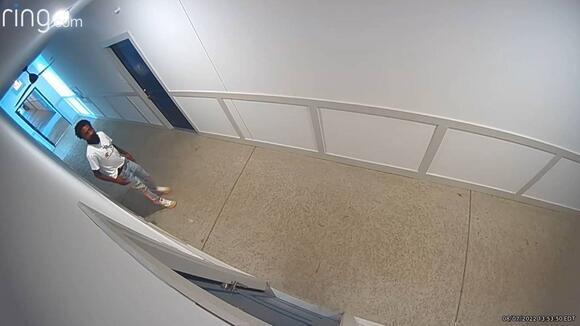 ATLANTA — Atlanta police have released a video of a man whom they said shot and killed another.

The shooting happened Sunday around 2 p.m. at the Parkside Apartments on Donald Lee Hollowell Parkway NW near Pierce Avenue NW.

Police said one man died in the shooting.

The video shows two men in a hallway of the apartment complex, and you can hear gunfire in the background. Investigators said they are searching for the man wearing a white T-shirt in the video.

On Tuesday, investigators released a photo of another person of interest that they are searching for related to the shooting. That person is also briefly seen in the newly released video.

Crime Stoppers is offering a $2,000 reward for information leading to an arrest. Anyone with information is asked to call them at 404-577-8477.

CLAYTON COUNTY, Ga — Clayton County police are seeking help to find two men connected to the shooting death of a teenager outside a barbershop. In April, gunshots broke out at a shopping center off River Station Boulevard. Police said Anthony ‘China’ McClain, 17, was an innocent bystander who got caught in the crossfire.
CLAYTON COUNTY, GA・6 HOURS AGO
WSB Channel 2 Atlanta

COBB COUNTY, Ga. — Police say that an attack at a Cobb County storage unit couldn’t be crazier if you scripted it for a movie. Channel 2′s Cobb County Bureau Chief Michele Newell was at a storage facility on Cobb Parkway, where police were called out to reports of someone banging on storage units with a hammer.
COBB COUNTY, GA・20 HOURS AGO
WSB Channel 2 Atlanta

GWINNETT COUNTY, Ga. — Gwinnett County police are investigating a robbery after a Lilburn pawn shop was robbed on Saturday. Police tell Channel 2 Action News they were able to get a photo of the possible suspect they believed robbed the Cash Advance Pawn located on US-78 from video surveillance footage.
GWINNETT COUNTY, GA・1 DAY AGO

More than 1,000 cars stolen off the streets of Atlanta in just 5 months, police say

ATLANTA — In just the first five months of 2022, Atlanta police say more than 1,000 cars were stolen off of the streets. Police say that more than half of those cars with the keys still inside or with the car already running. To put the 1,065 stolen cars...
ATLANTA, GA・1 DAY AGO
WSB Channel 2 Atlanta

ATLANTA — An Atlanta man is recovering from being stabbed by a woman he says he met on a dating app, according to police. Officers were called to the man’s Monroe Drive NE apartment complex around 5:30 a.m. on Monday morning. [DOWNLOAD: Free WSB-TV News app for alerts...
ATLANTA, GA・2 DAYS AGO

GWINNETT COUNTY, Ga. — The Gwinnett Police Department is investigating the shooting death of a teenager at a local mall officials said. Police responded to a person shot call just after 8 p.m. Wednesday evening. When they arrived, they found the victim, 17-year-old Elijah Dewitt of Jefferson, dead in...
GWINNETT COUNTY, GA・15 HOURS AGO
WSB Channel 2 Atlanta

DEKALB COUNTY, Ga. — Decatur police are looking for a man that stole a woman’s car in Decatur. Police said on Friday, the suspect in the photo approached a woman who was sitting in her parked car and pointed a gun at her. [DOWNLOAD: Free WSB-TV News app...
DECATUR, GA・2 DAYS AGO
WSB Channel 2 Atlanta

Man who stabbed woman to death killed after stepping in front of semi on 285, police say

ROSWELL, Ga. — Roswell police say they believe a man who stabbed a Roswell woman to death Sunday night then stepped into traffic on I-285, where he was killed. Police said they were called to a home at the Midwood Roswell Apartments on Mimosa Boulevard around 10 p.m. Police found 31-year-old Rosa Evaristo Perez dead inside the apartment with an apparent stab wound.
ROSWELL, GA・3 DAYS AGO
WSB Channel 2 Atlanta

Some parents say it sent their hearts racing when they learned someone fired shots near their children’s school as they played outside. The school had to go into a soft lockdown. It happened Tuesday at Roberta T. Smith Elementary in Rex on Highway 42. Students were on the school’s...
REX, GA・20 HOURS AGO
WSB Channel 2 Atlanta

1 person injured after Gwinnett home goes up in flames

LAWRENCEVILLE, Ga. — Gwinnett County firefighters have put out a fire that erupted on the deck of a Lawrenceville home on Wednesday afternoon. Fire crews say when they arrived to the Kings Circle home minutes after the 4 p.m. 911 call, the fire had spread from the deck and into the home.
LAWRENCEVILLE, GA・19 HOURS AGO
WSB Channel 2 Atlanta

COBB COUNTY, Ga — A Cobb County woman is charged with murdering a relative who police believe could be her own mother. According to the arrest warrant, Gretchen Fortney is accused of hitting 78-year-old Martha Fortney with an unknown object or objects and strangling her to death. [DOWNLOAD: Free...
COBB COUNTY, GA・2 DAYS AGO
WSB Channel 2 Atlanta

GWINNETT COUNTY, Ga. — A 19-year-old is now facing gun charges after police caught him walking around a Gwinnett County school with a shotgun. Channel 2′s Audrey Washington was at Archer High School Wednesday, where police said Brian Garfield Fort was spotted on campus with a shotgun during a football game over the weekend.
GWINNETT COUNTY, GA・22 HOURS AGO
WSB Channel 2 Atlanta

DALTON, Ga. — A Dalton man has been charged with murder after police said he beat his girlfriend until she was unconscious at their home. [DOWNLOAD: Free WSB-TV News app for alerts as news breaks]. Rachael Schaefer, 40, died Monday after being injured in a domestic violence incident on...
DALTON, GA・2 DAYS AGO