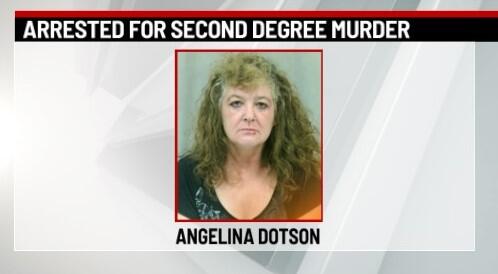 PANTHER, WV (WVNS) – A woman from McDowell County was arrested for second degree murder after another woman was shot at a home in the Panther area of McDowell County.

According to the criminal complaint, on Monday, August 8, 2022, Angelia Dotson, of Panther, was sitting in a car in the driveway of the home. She was allegedly distraught from an earlier incident. At that time, the victim, Jeaninine Justice reportedly went out to check on Dotson. That is when Dotson fired four shots from a handgun, hitting Justice in the chest.

Two witnesses were at the home during the incident. When the shots were fired they ran away from the scene.

Jeaninine Justice was treated by EMS, but died from the injuries she received.

Dotson was arrested and charged with second degree murder and wanton endangerment.

Stick with 59News for potential updates on this story.

FAYETTEVILLE, WV (WVNS) — A Georgia man is facing felony charges in Fayette County. On September 22, 2022, 44-year-old Clinton Whitehead of Georgia was brought to a temporary holding cell after being sentenced to 1 to 5 years in prison in the Circuit Court of Fayette County for the offense of Possession with Intent to […]
3 DAYS AGO
WVNS

RALEIGH COUNTY, WV (WVNS)– The daughter of a 46-year-old Wyoming County man who died at Southern Regional Jail recently said she wants U.S. Senator Joe Manchin to order a federal investigation of administrative oversight and practices at the jail. The woman’s father, Alvis Shrewsbury is the fifth person who is known to have died at […]
WYOMING COUNTY, WV・4 DAYS AGO
WVNS

RALEIGH COUNTY, WV (WVNS) — West Virginia’s regional jail system has one of the highest inmate death rates in the nation, with Reuters reporting for every 1,000 inmates, there are 2.23 deaths – the highest among 44 states in the study. The national average is 1.46. More than half of the deaths happen before the […]
WYOMING COUNTY, WV・2 DAYS AGO
WVNS

Come join Fayette County for October in the Park

FAYETTEVILLE, WV (WVNS) — An event to look forward to next month that is coming back after 20-plus years is October in the Park. This event will start right in the beginning of October on Saturday, October 1, 2022, with a variety of activities that are fun for the whole family including obstacle courses, live […]
FAYETTE COUNTY, WV・5 HOURS AGO

BECKLEY, WV (WVNS) — The Beckley Travel Plaza on I-77 is closed following a fire. According to David Wriston, Fire Chief of the Bradley Prosperity Volunteer Fire Department, the fire started as a grease fire in Burger King. Employees called 911 and evacuated. Wriston said the fire was contained within 30 minutes. Bradley Prosperity Volunteer […]
BECKLEY, WV・2 DAYS AGO
WVNS

SUMMERS COUNTY, WV (WVNS) – Veterans gathered at Bluestone State Park on Saturday, September 24, 2022, to honor a Summers County marine who was killed in action in 1983. It was a beautiful day for a Ruck. That’s what marines call a hike, named for the heavy rucksack they carry on their backs. On the […]
SUMMERS COUNTY, WV・1 DAY AGO
WVNS

Students at one Mercer County school use DUI Simulator

BLUEFIELD, WV (WVNS)– Students at Bluefield High School learned about driving impaired with a DUI Simulator. It was sent by the state’s alcohol beverage control authority. Ernest Gilliard, the driver’s education teacher says this lesson needs to be taught now rather than later. “The earlier you teach it then the more effective it would be. […]
BLUEFIELD, WV・4 DAYS AGO
WVNS

CHARLESTON, WV (WOWK) – A Wyoming County man has been indicted for allegedly failing to pay over employment taxes, according to the United States Department of Justice. According to the DOJ, a federal grand jury indicted Christopher J. Smyth, of Pineville, on charges of four counts of “willful failure to pay over employment taxes” and […]
WYOMING COUNTY, WV・3 DAYS AGO

BECKLEY, WV (WVNS) – An early morning fire happened at the Beckley Travel Plaza on the Turnpike today, Friday, September 23, 2022. A reported grease fire at a fast-food restaurant closed the Beckley Travel Plaza on the West Virginia Turnpike earlier this morning. The fire was ruled entirely accidental by firefighters and was turned over […]
BECKLEY, WV・2 DAYS AGO
WVNS

BECKLEY, WV (WVNS) — The streets of Beckley are a bit cleaner due to the efforts of one local organization. Raleigh County Adult Education spent several hours picking up trash along Harper Road as part of the group’s Adopt a Highway initiative. Raleigh and Summers County first partnered with Adopt A-Highway back in 2021 to […]
BECKLEY, WV・1 DAY AGO
WVNS

PINEVILLE, WV (WVNS) — According to Norfolk & Southern Railroad, WV Route 16 in Wyoming County will be closed in the near future for railroad crossing maintenance. On Saturday, October 8, 2022, Route 16 will be closed to all travelers from 8 a.m. to 6 p.m. Maintenance and repairs are scheduled to be done on […]
WYOMING COUNTY, WV・2 DAYS AGO
WVNS

BLUEFIELD, VA (WVNS)–A new place for physical therapy opened on Thursday, September 22, 2022, in Tazewell County. H2 Health in Bluefield is the ideal place to get your body back to normal. They specialize in physical therapy and speech therapy for all ages. Traci Roberts, the Regional Director of Operations for H2 Health said they […]
TAZEWELL COUNTY, VA・3 DAYS AGO
WVNS

BRENTON, WV (WVNS) – The community of Brenton in Wyoming County is preparing to say goodbye to a beloved restaurant. Pizzamingo in the community of Brenton is closing it’s doors for good. Opened in 1985 by Dale Robinson the eatery has been the home for everything from supplying pizza to the area high schools, to numerous […]
WYOMING COUNTY, WV・6 DAYS AGO