Police chase ends with I-10 crash near LaPlace, child found in backseat of suspect’s car 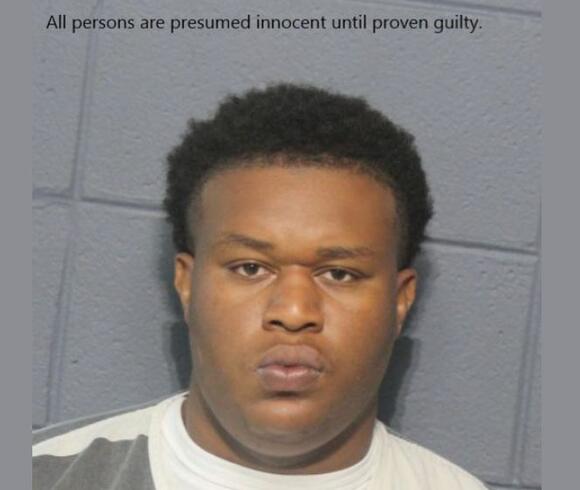 DISCLAIMER: All persons are presumed innocent until proven guilty.

LAPLACE, La. ( WGNO )— A Killona man has been arrested after detectives say he led deputies on a high-speed chase with a young child in the backseat. The St. John the Baptist Sheriff’s Office says 24-year-old Davon Tyrell Dallon was taken into custody and faces charges that include aggravated flight from an officer and cruelty to a juvenile.

The SJSO reports that it all started around 4:30 p.m. Monday when deputies learned of a fugitive out of Jefferson Parish driving in the area west of LaPlace near the intersection of Louisana 3188 and U.S. 61. When they tried to make a traffic stop, deputies say the driver, revealed to be Dallon, refused to stop and headed north on LA 3188.

Video shows father trying to save the lives of his 2 stabbed children, NOPD arrests mother

According to detectives, the pursuit meandered through multiple streets in the Belle Terre subdivision. When deputies tried to deploy spike strips, Dallon continued to head north towards I-10, striking two officers inside their patrol units in the process.

The car chase ended when Dallon entered I-10 and lost control of the vehicle near mile marker 203.9, crashing into another vehicle and then a concrete guardrail. However, SJSO says the pursuit continued as the suspect jumped out of the car and into the marsh below. After a search and rescue team was dispatched, Dallon was taken into custody.

When deputies searched Dallon’s vehicle, they found a 4-year-old boy laying on the back floorboard. The relationship between the suspect and the child was unclear, however, detectives say the boy was unharmed in the crash.

Five people were taken to the hospital following the pursuit: the two officers and three people who were involved in the I-10 crash. All five were treated and released.

Dallon was booked into the St. John Parish Correction Center on following charges:

The suspect was also wanted on a fugitive warrant out of Jefferson Parish. Deputies say he’s being held in custody in place of a $550,000 bond.

PICKENS COUNTY, Ala. (WIAT) — A Mississippi man has been sentenced to 25 years in prison on charges of shooting an extended family member in August 2020. According to the State of Alabama, Eric Jennings, 38, pleaded guilty to the first-degree assault of an Ethelsville man. Jennings drove from Mississippi on the morning of Aug. […]
SYLACAUGA, AL・3 HOURS AGO
CBS 42

Remains of Virginia teen who disappeared 47 years ago ID’d

Remains of a person found decades ago are those of a teenager who disappeared in 1975.
MCLEAN, VA・8 HOURS AGO
CBS 42

A 3-year-old boy whose aunt is charged with pushing him into Lake Michigan has died, according to a family source.
CHICAGO, IL・13 HOURS AGO
CBS 42

Two days after Rebecca Gillespie was injured after being hit by a falling cell phone, she’s back in the hospital.
OKLAHOMA CITY, OK・3 DAYS AGO
CBS 42

Konstantin Lavrentev, the Russian man who escaped from an ICE detention center in Evangeline Parish has been apprehended.
EVANGELINE PARISH, LA・3 DAYS AGO
CBS 42

Two 1994 unsolved cases in Missouri and Illinois have baffled investigators for decades.
MOLINE, IL・3 DAYS AGO

MONTGOMERY, Ala. (WIAT) — Protestors gathered outside of the Alabama Department of Corrections headquarters in Montgomery Monday to voice their concerns on the conditions inside prisons across the state. Rally organizers have listed their demands to improve the conditions including parole reform and repeal of the habitual offender law which imposes longer prison sentences each […]
MONTGOMERY, AL・7 HOURS AGO
CBS 42

This 118-pound catfish caught in Tennessee may break state record

A monster-size catfish caught in the Cumberland River may break the state record as the biggest catfish ever caught in Tennessee.
STEWART COUNTY, TN・12 HOURS AGO
CBS 42

TRACKING HURRICANE IAN Ian continues to move northwestward this afternoon towards Cuba, and rapid intensification will continue through the next 24-36 hours. Ian will move over the western tip of Cuba Monday night, re-emerging into the Gulf of Mexico by Tuesday morning a major hurricane. Ian will drift north-northeastward, coming to a near stall along […]
FLORIDA STATE・6 HOURS AGO
CBS 42

BIRMINGHAM, Ala. (WIAT) — Two Alabama veterans captured in Ukraine are back on American soil and will soon connect with their closest loved ones in a moment they’ve been awaiting for months. Alex Drueke and Andy Huynh were taken by Russian forces on June 9 and held as prisoners of war until they were freed […]
ALABAMA STATE・2 DAYS AGO

BIRMINGHAM Ala. (WIAT) — Two Alabama veterans captured in Ukraine are now home and reunited with their closest loved ones. Alex Drueke and Andy Huynh had been held as prisoners of war by Russia until they were freed on Wednesday. It was a warm and cheerful welcome home for Drueke and Huynh this afternoon. Family […]
ALABAMA STATE・2 DAYS AGO
CBS 42

Ian poised to strengthen to major hurricane in the Gulf

All eyes are on Ian right now, and it's unclear how the storm could impact our weather late next week.
ALABAMA STATE・16 HOURS AGO
CBS 42

MONTGOMERY, Ala. (WIAT) — Gov. Kay Ivey and other state leaders are welcoming the shift to electric vehicles in Alabama as a plus for the economy. Lawmakers are grappling with how to make up for lost gas tax revenue if, and some say when, EVs become dominant on the roads. Right now, Alabama collects about […]
ALABAMA STATE・3 DAYS AGO
CBS 42

Gov. DeSantis declares state of emergency for 24 Florida counties ahead of storm

Florida Gov. Ron DeSantis declared a state of emergency for 24 counties ahead of Tropical Depression 9 on Friday.
FLORIDA STATE・3 DAYS AGO
CBS 42

When will Hurricane Ian make landfall in the US?

Hurricane Ian is expected to grow larger and strengthen into a Category 4 storm before reaching the U.S. this week.
FLORIDA STATE・7 HOURS AGO
CBS 42

Tropical Storm Ian Has Formed in the Caribbean

A Tropical Storm watch has been issued for Jamaica as Tropical Storm Ian. Ian will not make a direct hit on Jamaica’s coast, but Jamaica will remain on the right side of the storm where the most wind and rain will be. For this reason, winds of 35-45 mph can be felt on the Caribbean […]
FLORIDA STATE・3 DAYS AGO
CBS 42

Alabama veterans captured in Ukraine back on U.S. soil

“We’re looking forward to spending time with family and we’ll be in touch with the media soon,” Drueke told reporters at the airport. “Happy to be home.”
ALABAMA STATE・2 DAYS AGO
CBS 42

91 days out at sea, solo kayaker finally makes it to Hawaii

After 91 days and 9 hours out at sea alone, Cyril Derreumaux is checking an item off his long bucket list of adventures, one that he's been training for the past four years.
HONOLULU, HI・1 DAY AGO