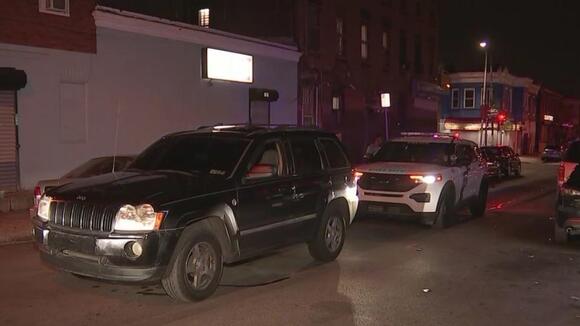 When the vehicle came to a stop at Ontario and Hope Streets, police say they found a shooting victim in the back passenger seat.

Police rushed him to the hospital in critical condition.

Investigators say they are working to find out where the shooting happened.

PHILADELPHIA (CBS) – Philadelphia police are investigating the shooting death of a man in Oxford Circle. Officers say around 12:30 a.m. Monday, they responded to reports of a man being shot multiple times in an alleyway behind the 1600 block of Creston Avenue.Investigators say the victim was pronounced dead at the scene before officers were able to transport him to the hospital.
PHILADELPHIA, PA・14 HOURS AGO
CBS Philly

PHILADELPHIA (CBS) – Two teen boys are shot near a Philadelphia Mcdonald's. The scene unfolded near where Roosevelt Boulevard meets Hunting Park Avenue in the city's Nicetown neighborhood around 3 a.m. Monday. Police tell CBS3 they found a 14-year-old with a gunshot wound to his leg and rushed him to the hospital. A 13-year-old boy was also found just blocks away, also shot in the leg. Both are in stable condition Monday morning.
PHILADELPHIA, PA・15 HOURS AGO
CBS Philly

PHILADLPHIA (CBS) -- Philadelphia police are investigating a double shooting that happened Saturday afternoon in Ogontz. A car was riddled with bullet holes on the 1800 block of Stenton Avenue around 1:30 p.m.Police say a 30-year-old man was shot 8 times throughout his body and a 30-year old woman was shot once in the shoulder.Both were taken to the hospital and are listed in stable condition.Police say a weapon was recovered at the scene.
PHILADELPHIA, PA・1 DAY AGO
CBS Philly

PHILADELPHIA (CBS) -- At least 393 people have been killed in the city of Philadelphia in 2022. For many families left to deal with the grief, they must also live with the reality that their loved one's killer remains on the run. For every person killed in Philly, there's about a 50/50 chance their case will be solved. "Unfortunately he is not with us to share his 31st birthday," Temeka Murray said.  Dominique Johnson Murray would have celebrated his 31st birthday Sunday. Instead, his mother Temeka Murray marked the day with a balloon release to honor her son's life cut short in...
PHILADELPHIA, PA・21 HOURS AGO

PHILADELPHIA (CBS) – Philadelphia police are investigating a shooting in North Philadelphia that left one person dead. The shooting happened around 1 a.m. Sunday near the intersection of West Girard Avenue and Broad Street.Police say the victim was shot several times and taken to Temple Hospital where that person was pronounced dead.No arrests have been made.
PHILADELPHIA, PA・1 DAY AGO
CBS Philly

PHILADELPHIA (CBS) -- A group of about 100 juveniles ransacked a Wawa in Philadelphia's Mayfair section Saturday night. The store is located on Roosevelt Boulevard at Tyson Avenue.Police are working with the Philadelphia School District to identify the young people seen in the video ransacking the store, but they are also pleading for the public's help, especially to the parents of these alleged vandals.  Cellphone video captures the chaos as juveniles stole and broke things throughout the store.  Police say a large group of young people stormed the convenience store, stealing and vandalizing, while employees watched helplessly around 8:30 p.m....
PHILADELPHIA, PA・2 HOURS AGO
CBS Philly

Rec center employee shot, killed in West Philadelphia will be laid to rest

PHILADELPHIA (CBS) – Tiffany Fletcher, the rec center employee shot and killed in West Philadelphia, will be laid to rest. Fletcher died in September 2022 when she got caught in the crossfire of a shooting outside of her job at Mill Creek Rec Center.Her services begin at 11 a.m. Monday at Deliverance Evangelistic Church on West Lehigh Avenue.Beginning at 8:45 a.m., Philadelphia Parks and Rec will be providing shuttle services from the rec center to the church for community members.
PHILADELPHIA, PA・14 HOURS AGO
CBS Philly

PHILADELPHIA (CBS) – The driver connected to Mayfair's Friday night deadly hit-and-run is now cooperating with Philadelphia police. The crash happened around 9:30 p.m. on Friday on Cottman Avenue.Officials say the driver struck the victim, a pedestrian, and hit another vehicle while driving away from the scene.The victim was found 150 feet or so from the intersection.Police have not released his identity.The investigation is ongoing.
PHILADELPHIA, PA・1 DAY AGO

$15,000 reward being offered in connection with gun shop burglary in Montgomery County

SPRINGFIELD TOWNSHIP, Pa. (CBS) -- A $15,000 reward is being offered for information on a gun store burglary in Montgomery County. Five people broke into Founding Fathers Outfitters in Springfield Township early Saturday morning.They were driving a blue Sedan.Investigators say several handguns were taken in the robbery.The Bureau of Alcohol, Tobacco and Firearms is investigating.The National Sports Shooting Foundation is offering a $5,000 reward on top of the government's $10,000 reward.If you have any information, call the Springfield Township police.
MONTGOMERY COUNTY, PA・1 HOUR AGO
CBS Philly

2 people taken to hospital after car crashes into Bustleton home

PHILADELPHIA (CBS) - Two people were injured after a car crashed into a home in Philadelphia's Bustleton section on Monday. It happened on the 9600 block of Bustleton Avenue, just before 3 p.m.The two people were taken to Torresdale Hospital with minor injuries.  No word on what caused the crash.
PHILADELPHIA, PA・4 HOURS AGO
CBS Philly

PHILADELPHIA (CBS) – A fire at a high-rise apartment building in University City broke out overnight. It happened around 11:45 p.m. Sunday on the 3700 block of Chestnut Street. Firefighters say they arrived to see smoke coming from the third floor.The building was evacuated and the fire was quickly placed under control.No one was injured.The cause of the fire is under investigation.
PHILADELPHIA, PA・15 HOURS AGO
CBS Philly

PHILADELPHIA (CBS) – A man was killed in a hit-and-run in Philadelphia's Mayfair section on Friday evening, police say. The crash happened at the intersection of Cottman and Brous Avenues around 9:30 p.m.Police say he was struck by a black Sedan at the intersection. The Sedan then took off westbound on Cottman Avenue, sideswiping a 2006 Hyundai.Police say they discovered the pedestrian 150 feet away from the intersection. He was pronounced dead by medics at 9:38 p.m. The Investigation is active and ongoing with the Accident Investigation Division. Anyone with information on this incident is asked to call (215) 685-3180.
PHILADELPHIA, PA・2 DAYS AGO

PHILADELPHIA (CBS) -- Philadelphia police need your help tracking down the gunman who killed a man near Drexel University. Authorities released surveillance video of the shooting Friday.Police describe the murder as horrific.Police say the victim was hanging out with friends in South Philadelphia, took the train home and as he was walking back to his apartment, he was shot to death by a stranger for no apparent reason.Surveillance video shows the gunman in a black hoodie walking down North 35th Street around 12:30 a.m. Thursday. Just as he crosses paths with 23-year-old Everett Beauregard, he turns around and opens fire."Mr....
PHILADELPHIA, PA・2 DAYS AGO
CBS Philly

PHILADELPHIA (CBS) -- Protestors sick of the violence in Philadelphia staged a march Sunday morning through Temple University's campus. That's after a number of high-profile crimes in that area in the past few weeks.The police association came together with students and volunteers to stand up against violence in their neighborhood.One of those latest shooting incidents grazed an 8-year old girl in the head and blew out a dorm window on campus.
PHILADELPHIA, PA・23 HOURS AGO
CBS Philly

PHILADELPHIA (CBS) -- A Philadelphia man has been arrested and charged in connection with a fatal shooting on South Street that happened early Saturday morning, police say. Quadare Lane, 28, has been charged with murder, violations of uniform firearms act and other related offenses for allegedly killing a 35-year-old man.  The 35-year-old man's identity is unknown at this time. Police say the shooting stemmed from an argument. The shooting happened on South Street between 4th and 5th Streets.Just before 1 a.m. Saturday, police say a fight broke out between a group of men and a group of women. At some point, someone...
PHILADELPHIA, PA・2 DAYS AGO
CBS Philly

PHILADELPHIA (CBS) -- A 9-year-old and her mother were hit by a car while crossing the street. The driver kept going and then crashed into a building. The driver then ran away.The mother is in critical condition, her daughter is in stable condition. Both were taken to Albert Einstein Hospital. Meanwhile, at the scene in Roxborough, there's little surprise that there was an accident at this intersection.Just past noon on Friday, roughly 300 to 400 feet beyond the traffic light at Walnut Lane and Henry Avenue, a 2010 Nissan Maxima struck the mother and daughter in front of one of...
PHILADELPHIA, PA・2 DAYS AGO
CBS Philly

PHILADELPHIA (CBS) – Police say an axe, sledgehammer and crowbar were used to steal cash from machines in an early morning smash-and-grab. Three men believed to be in their 20s pulled up in a white Nissan Rogue to a Sunoco on Roosevelt Boulevard around 2:30 a.m. Saturday.They escaped southbound on the Boulevard with an unknown amount of cash.No one was injured.
PHILADELPHIA, PA・1 DAY AGO
CBS Philly

PHILADELPHIA (CBS) -- A crackdown for drivers who use bus lanes in Center City went into effect on Monday. The new initiative means Philadelphia law enforcement will be issuing tickets to those drivers and focusing on moving violations.Officers will concentrate on the areas of Chestnut and Market Streets and JFK Boulevard.SEPTA says enforcement can significantly speed up travel time for its buses.
PHILADELPHIA, PA・1 HOUR AGO
CBS Philly

PHILADELPHIA (CBS) -- A father and son were targeted in a carjacking attempt in Philadelphia's Tacony section. It happened around 6:15 a.m. Friday outside of a Dunkin' on the 7200 block of Torresdale Avenue.The Dunkin' is right across the street from Saint Hubert's High School.Police say two men tried to steal the victim's car.Investigators say shots were fired during the incident, but it's unclear where the gunfire came from.No one was hurt and the father and son managed to get away. So far, no arrests have been made.
PHILADELPHIA, PA・3 DAYS AGO
CBS Philly

SHARON HILL, Pa. (CBS) – A judge in Delaware County has denied a motion to dismiss manslaughter charges against three former officers charged in the shooting death of 8-year-old Fanta Bility. She was shot and killed as her family left a high school football game last August. Family from both sides were in the courtroom Monday and all eyes were on the judge at the Delaware County Courthouse.Monday afternoon, the judge denied the defense's motion to dismiss the manslaughter and involuntary manslaughter charges against the three former Sharon Hill police officers:  Brian Devaney, Sean Dolan and Devon Smith.These were two of...
SHARON HILL, PA・4 HOURS AGO