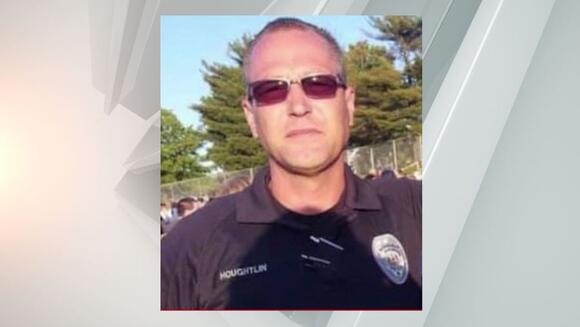 According to US Attorney Gerard M. Karam, Todd Houghtlin, 52, of Duryea, admitted to possession of fentanyl for distribution in Luzerne County in 2020, and being a user of illegal drugs in possession of a gun and ammunition.

Investigators say the charges are from an incident that occurred in July of 2020 , where law enforcement pulled Houghtlin’s car over and found him in possession of 50 packets of fentanyl and a pistol loaded with four rounds of ammunition.

Houghtlin worked as a police officer in Pittston Township but had his police certification suspended by the Municipal Police Officer’s Education and Training Commission.

Houghtlin pleaded guilty to possession with intent to distribute fentanyl and illegal possession of a firearm. His sentencing has been scheduled for November 1, 2022.

The maximum penalty for drug trafficking is twenty years imprisonment.

MONROE TOWNSHIP, SNYDER COUNTY (WBRE/WYOU) — State police say a man was found impersonating a trooper at a Buffalo Wild Wings in Snyder County. According to Pennsylvania State Police, on September 5, around 6:00 p.m., police were called for a suspicious person claiming to be a state police trooper at Buffalo Wild Wings in Monroe Township. […]
SNYDER COUNTY, PA・8 HOURS AGO
WBRE

LUZERNE COUNTY (WBRE/WYOU) — Police say an inmate in Luzerne County Correctional Facility plotted to have two girls and a woman killed before his trial. According to Pennsylvania State Police, in December of 2021 officials learned that an inmate at the Luzerne County Correctional Facility was asking fellow inmates about hiring a hitman to kill multiple […]
LUZERNE COUNTY, PA・4 HOURS AGO
WBRE

BERWICK, COLUMBIA COUNTY (WBRE/WYOU) — According to Pennsylvania State Police, a 22-year-old man was arrested in Berwick and is facing forgery and counterfeiting charges. PSP say that the man’s first victim, a 70-year-old woman, initially reported that the man had accessed her bank account without her consent. The victim also reported that the suspect had […]
BERWICK, PA・8 HOURS AGO
WBRE

SCRANTON, LACKAWANNA COUNTY (WBRE/WYOU) — Police arrested two men after they say one was found to be illegally possessing a gun, and drugs were seized from inside a U-Haul during a traffic stop in Scranton. According to the Scranton Police Department, on August 8, officers pulled over a U-Haul moving truck in the 1100 block of […]
SCRANTON, PA・9 HOURS AGO

TOBYHANNA TOWNSHIP, MONROE COUNTY (WBRE/WYOU) — State police in Monroe County say they have seized over just 70 pounds of marijuana from a car after conducting a traffic stop. According to Pennsylvania State Police, on Saturday, September 24, troopers pulled over a car for traffic violations in Tobyhanna Township. Investigators say during the stop, there were […]
MONROE COUNTY, PA・9 HOURS AGO
WBRE

SCRANTON, LACKAWANNA COUNTY (WBRE/WYOU)— The Lackawanna County District Attorney tells Eyewitness News a man who pled guilty to killing a toddler in Scranton was sentenced to up to 60 years in state prison Friday evening. District Attorney Mark Powell said the judge sentenced Christopher Mele, 35, to a minimum of 30 years and a maximum […]
SCRANTON, PA・2 DAYS AGO
WBRE

SWIFTWATER, MONROE COUNTY (WBRE/WYOU) — Pocono Township Police Department report that the suspect from Friday’s robbery of the Keystone Community Bank in Monroe County is the same suspect from Friday’s robbery of the FNCB Bank in Plains Township.   According to police, the suspect entered the Keystone Community Bank at 11:43 a.m. Friday.   The […]
MONROE COUNTY, PA・2 DAYS AGO
WBRE

WILLIAMSPORT, LYCOMING COUNTY — According to U.S. Attorney Gerald M. Karam, a Philadelphia man was indicted by a federal grand jury for drug trafficking charges. Karam said that 27-year-old Demitri Carroll was charged with one count of conspiracy to distribute drugs and nine counts of possession with intent to distribute drugs in Clinton and Lycoming […]
LYCOMING COUNTY, PA・3 DAYS AGO

Woman sentenced for role in foiled hit on detectives

WILKES-BARRE, LUZERNE COUNTY (WBRE/WYOU) — A woman who police say delivered cash to an undercover trooper posing as a hitman pled guilty and was sentenced in Luzerne County court. According to online court records, Samantha Loughney, 29, of Wilkes-Barre, pled guilty Monday to three separate crimes. Investigators say in April of 2021, William Lynn, 27, an […]
3 DAYS AGO
WBRE

SUNBURY, NORTHUMBERLAND COUNTY (WBRE/WYOU) — Sunbury police are looking for a man they say is involved in a bar shooting that left one man dead. According to the Sunbury Police Department, on Sunday, September 25, around 2:30 a.m., officers responded to a reported shooting at the Laughter’s Bar in the 100 block of South Third […]
SUNBURY, PA・1 DAY AGO
WBRE

PLAINS TOWNSHIP, LUZERNE COUNTY (WBRE/WYOU)— Local police are investigating a possible connection between two bank robberies. The holdups happened on Friday within hours of each other in two counties. “It’s actually scary that it happened so close to home,” said Ed Hennigan, an Exeter resident. Two bank robberies in two counties. The Plains Township Police […]
PLAINS TOWNSHIP, PA・2 DAYS AGO

Editor’s Note: Eyewitness News has updated this story to include the current status of investigations surrounding this incident. PLAINS TOWNSHIP, LUZERNE COUNTY (WBRE/WYOU) — Police say they are searching for a person involved in a robbery at the FNCB Bank in Plains Township. The robbery occurred around 9:15 a.m. Friday at the FNCB Bank on State […]
PLAINS TOWNSHIP, PA・3 DAYS AGO
WBRE

Beaver Meadows man defrauded of over $10,000

BEAVER MEADOWS, CARBON COUNTY (WBRE/WYOU) — According to Pennsylvania State Police, a 60-year-old man from Beaver Meadows reported $10,800.00 stolen from his bank account. PSP say the man walked into the station to report a theft by wire fraud on September 15. Police have no active suspects at this time. This is an ongoing investigation.
BEAVER MEADOWS, PA・3 DAYS AGO
WBRE

Catalytic converters, gun stolen out of cars in Carbon County

EAST SIDE BOROUGH, CARBON COUNTY (WBRE/WYOU) — Pennsylvania State Police say that on Wednesday, various items, including catalytic converters were stolen from three cars in Carbon County. PSP say that the cars were parked at the East Side Inn parking lot. According to PSP, someone broke into the three vehicles and stole the following items: […]
CARBON COUNTY, PA・10 HOURS AGO
WBRE

SCRANTON, LACKAWANNA COUNTY (WBRE/WYOU) — Scranton Firefighters are investigating a deadly fire in the city. The Scranton fire Department said they were dispatched for a reported house fire on the 500 block of North Main Avenue just after 4 p.m. on Saturday. Scranton Fire Officials confirm one person had died. Another person was injured but […]
SCRANTON, PA・2 DAYS AGO
WBRE

SCRANTON, LACKAWANNA COUNTY (WBRE/WYOU) — District Attorney Mark Powell confirms with Eyewitness News all three teens involved in the fatal stabbing, of an 18-year-old will be charged as adults. According to D.A. Powell, District Justice Sean McGraw ruled there was sufficient evidence to place all charges against Amir Williams, 16, Nahsyeis Williams, 16, and Sheldon Datilus, […]
SCRANTON, PA・3 DAYS AGO
WBRE

EYEWITNESS NEWS (WBRE/WYOU ) — Sunday marks 40 years since George Banks murdered 13 people in Luzerne County. Banks was convicted of shooting and killing seven children, five of his own, and six adults. At the time, it was one of the largest mass murders in the history of the United States and remains the […]
LUZERNE COUNTY, PA・3 DAYS AGO
WBRE

SUGARLOAF TOWNSHIP, LUZERNE COUNTY (WBRE/WYOU) — This time of year, many people associate cemeteries with Halloween. But this story isn’t scary, it is inspiring. One teenager saw a local historic cemetery as a Girl Scout Silver Award Project that would help her and her community. Erica Schwear has been in the Girl Scouts since fourth […]
SUGARLOAF TOWNSHIP, PA・1 HOUR AGO
WBRE

NANTICOKE, LUZERNE COUNTY (WBRE/WYOU)- One man is dead after an early morning domestic situation.   Around 4:30 am Sunday, Nanticoke Police arrived on scene on East Grand Street after receiving reports of an ongoing domestic situation.   According to police on scene a 32-year-old male had been assaulting his girlfriend before she managed to escape the […]
NANTICOKE, PA・1 DAY AGO