TCU Defensive Players to Watch vs. Longhorns in Week 11 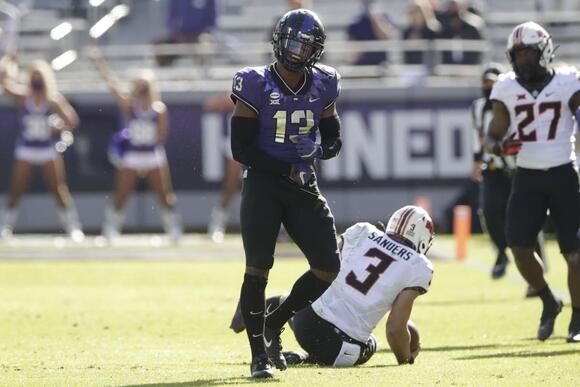 The Horned Frogs need to vastly improve on defense in 2022.

The Texas Longhorns will welcome the TCU Horned Frogs to Austin in Week 11. The Longhorns have dominated the all-time series leading 64-27-1, including last year's victory in Fort Worth.

The Longhorns continued their 2021 hot start with a 32-27 classic victory against rival TCU. That matchup saw Texas improve to 4-1 and running back Bijan Robinson run wild for a season-high 216 yards.

The Horned Frogs bring in first-year head coach Sonny Dykes from SMU. He is no stranger to Texas football, but he will have an uphill battle bringing back consistent success to Fort Worth. At SMU last year the Mustangs finished 8-4 including a win against TCU.

TCU brings in new defensive coordinator Joe Gillespie, who coached at Tulane for three seasons. Gillespie welcomes in a new defensive scheme for the Horned Frogs in the 3-3-5, who will be looking to turn things around in 2022.

Be sure to stick with LonghornsCountry.com as we preview every aspect of the matchup with the Wildcats throughout the week. We’ve already done a general preview of the Horned Frogs and offensive players to watch . Now let’s take a look at TCU defensive players the Longhorns should watch out for.

Dee Winters is by far the best defensive returner on this Horned Frog team. He is coming off a fantastic 2021 campaign in which he recorded a team-high 74 tackles. He is the anchor at the linebacker position, who will be hoping to provide some stability on defense for the Horned Frogs.

Winters will be tasked to contain many of the Longhorns offensive weapons. His skills of tackling and play recognition will play a pivotal role. Winters is also known for creating turnovers with interceptions or forcing fumbles. Expect the Longhorns to have Winters name circled for their Week 11 matchup.

The Longhorns are very familiar with Hodges-Tomlinson after his impressive performance against Texas last year. He recorded a season-high nine tackles and forced a crucial fumble. TCU will need to get a lot of mileage out of him because they ranked 8th in the Big 12 in passing yards per game in 2021. Star receiver Xavier Worthy will have his work cut out for him going up against a great player in Hodges-Tomlinson.

Nook Bradford returns for his Senior season being one of the main catalyst on the Horned Frog defense. Bradford had a very impressive 2021 season in which he recorded 52 tackles. Bradford was crucial last season because he was the last resort on busted plays for the Horned Frogs. Bradford’s known for his great open field tackling and last resort defensive coverage.

In 2022 Bradford is hoping some of the new transfers will help carry the defensive load. He is one of the veteran leaders on defense which will be looking to make a statement. Against the Longhorns expect Bradford being very active trying to stop the explosive Texas passing game. If TCU takes a step up on defense in 2022 Bradford is sure to be at the forefront.

The Longhorns head to Lubbock to take on the Red Raiders to start Big 12 play.
AUSTIN, TX・13 HOURS AGO
LonghornsCountry

The Longhorns got good news on their star receiver's injury
AUSTIN, TX・8 HOURS AGO
LonghornsCountry

The Texas Longhorns lead the Texas Tech Red Raiders at the half after some impressive work from coach Steve Sarkisian's offense.
AUSTIN, TX・11 HOURS AGO

The Longhorns Country staff provide predictions on Saturday's game between the Longhorns and the Red Raiders.
LUBBOCK, TX・1 DAY AGO
LonghornsCountry

Texas Tech Defensive Players to Watch vs. Texas in Week 4

Texas hopes to take advantage of Texas Tech’s defense if the Horns want to win their Big 12 Season opener in Week 4
LUBBOCK, TX・2 DAYS AGO
LonghornsCountry

The staffs of three Fan Nation Big 12 sites provide their game predictions for Week 3 of the college football season.
AUSTIN, TX・2 DAYS AGO

Maalik Murphy will travel with the Texas Longhorns for the team's first road game of the season against the Texas Tech Red Raiders, a positive step for Murphy's development at the position.
AUSTIN, TX・2 DAYS AGO
LonghornsCountry

Mike Leach on his weekly show discussed the validity of The Athletic report on how much Texas spent on Manning.
AUSTIN, TX・1 DAY AGO