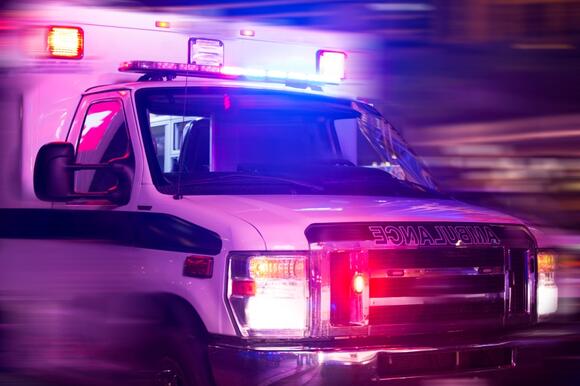 A driver was arrested on suspicion of DUI following a crash that left a Huntington Beach cyclist dead Tuesday evening.

The crash occurred around 6 p.m. as the cyclist was riding northbound in the southbound lanes on Pacific Coast Highway north of Admiralty Drive, the Huntington Beach Police Department stated in a news release.

The driver of a Toyota RAV4, identified as 70-year-old Barbara Front, was headed southbound and waited at the scene after striking the cyclist.

The cyclist, identified only as a 42-year-old man, was transported to a local hospital, where he was pronounced dead, the Police Department stated.

Front was arrested on suspicion of DUI, according to the Police Department.

Anyone who witnessed the collision or any events leading up to it was asked to call police at 714-536-5670.

A pursuit on the 15 Freeway ended in Hesperia with shots fired Tuesday morning. Authorities were in pursuit of a vehicle possibly wanted in connection to Monday’s abduction of a teen girl in Fontana. The law enforcement chase began in the Barstow area on the southbound 15 Freeway. The pursuit eventually stopped on the freeway […]
HESPERIA, CA・57 MINUTES AGO
KTLA

Woman arrested, accused of killing man after intentionally running him over with car in Cypress

Police in Cypress have taken a 20-year-old woman into custody after she allegedly killed a man after she ran him over with her car. The incident unfolded around 8:30 p.m. Sunday near Graham Street, adjacent to Oak Knoll Park, according to a news release from the Cypress Police Department.   Authorities said that when officers […]
CYPRESS, CA・17 HOURS AGO
KTLA

Police are searching for a driver who fled the scene after fatally striking a motorcyclist in the Mid-City neighborhood of Los Angeles Sunday night. The crash occurred on South Fairfax Avenue and Electric Drive around 10:20 p.m, the Los Angeles Police Department stated in a news release A black, 4-door sedan was driving northbound on […]
LOS ANGELES, CA・1 DAY AGO
KTLA

More details are being released by law enforcement regarding a home invasion in Lancaster that left a woman dead early Sunday morning. According to the Los Angeles County Sheriff’s Department, the suspect in the investigation was a local transient in the area who acted alone when he gained entry into the victim’s home. The victim […]
LANCASTER, CA・19 HOURS AGO

Man killed by law enforcement after pinning deputy with his car in Rancho Cucamonga: SBSD

A Santa Monica man was shot and killed by San Bernardino County Sheriff’s Department deputies Saturday evening after he allegedly pinned a deputy with his car and then tried to attack him with a knife. It happened around 7:15 p.m. on the 11800 block of Foothill Boulevard in Rancho Cucamonga. Deputies were in the area […]
RANCHO CUCAMONGA, CA・1 DAY AGO
KTLA

An 18-year-old from Bloomington has been charged with murder on allegations that he sold and distributed opiods that led to the overdose death of a Highland teen. The San Bernardino County District Attorney’s Office formally charged Alfred Urrea with one count of murder for allegedly providing drugs to Adrian Alloway, an 18-year-old Highland man who […]
SAN BERNARDINO COUNTY, CA・12 HOURS AGO
KTLA

An out-of-control Prius stopped just feet away from a bedroom after it crashed through a brick wall in Pomona Sunday night. The incident was reported near the intersection of Orange Grove Avenue and Fairplex Drive at 11:46 p.m., a Pomona Police Department spokesperson confirmed. Arriving officers found a hole in a brick wall that surrounded […]
POMONA, CA・1 DAY AGO
KTLA

Authorities are asking the public for help in locating a “critical missing” 12-year-old girl last seen in Sun Valley. Daisy Marie Torres hasn’t been seen or heard from since 6:30 a.m. Monday when she was on the 12100 block of Allegheny Street, the Los Angeles County Sheriff’s Department said. Torres was described as a Hispanic […]
LOS ANGELES, CA・6 HOURS AGO

Police arrested four people in connection to an attempted burglary at a home in Beverly Hills Saturday evening. It happened around 8:30 p.m. at a home on the 600 block of North Roxbury Drive, according to the Beverly Hills Police Department. Police received a call regarding an attempted residential burglary at the home and responded […]
BEVERLY HILLS, CA・1 DAY AGO
KTLA

A Los Angeles County Sheriff’s Department deputy was hospitalized Sunday morning after their vehicle was involved in a collision in South Los Angeles, authorities said. The collision occurred shortly before 5:00 a.m. at the intersection of Van Ness and Marine avenues in Gardena. KTLA video showed the deputy’s cruiser with serious damage to the front-end […]
LOS ANGELES COUNTY, CA・2 DAYS AGO
KTLA

Two men were found dead Saturday night following a shooting in Compton. The shooting happened around 9:40 p.m. on the 1500 block of South Chester Avenue. Los Angeles County Sheriff’s Department deputies responded to the area regarding a report of a gunshot victim. When they arrived on scene, they found two men suffering from multiple […]
COMPTON, CA・2 DAYS AGO
KTLA

One person was killed and two others were hospitalized in a fiery multi-vehicle crash in Irvine on Saturday. The crash involved two cars and a semi-truck that was found overturned and engulfed in flames, according to the Orange County Fire Authority. The deadly collision occurred along the southbound lanes of the 5 Freeway near Jamboree […]
IRVINE, CA・3 DAYS AGO

Detectives with the Los Angeles Police Department asked for the public’s help Friday in locating two people in connection with a brutal felony hit-and-run in Boyle Heights that left the victim seriously injured.  The incident occurred on Aug. 27 at Fickett and Boulder Streets and was captured on security video.   In the footage, a […]
LOS ANGELES, CA・3 DAYS AGO
KTLA

1 injured in scaffolding collapse in Hollywood

One person was hurt and a taxi cab was crushed when scaffolding collapsed at a construction site in Hollywood. It happened just after 2:15 p.m. near the intersection of Highland Avenue and Leland Way. A worker who was on the scaffolding at the time of the collapse suffered injuries that were not believed to be […]
LOS ANGELES, CA・13 HOURS AGO
KTLA

Hazmat teams with the Riverside County Fire Department were working to clear an unknown, caustic substance at a container recycling center in Jurupa Valley Friday morning.   Calls for a medical emergency came in around 10:15 a.m. at the center on the 2200 block of Via Cerro. When first responders arrived, they found one person […]
JURUPA VALLEY, CA・3 DAYS AGO
KTLA

A Riverside man has pleaded guilty on Wednesday to breaching the U.S. Capitol during the January 6 riots in 2021. The suspect, 45-year-old Andrew Alan Hernandez, is facing felony charges after pleading guilty to aiding and abetting in the obstruction of an official proceeding. He could face up to 20 years in prison with additional […]
RIVERSIDE, CA・4 DAYS AGO
KTLA

A small brush fire whipped up large plumes of smoke in Calabasas Saturday afternoon. The fire was first reported around 12:45 p.m. on the 24000 block of Calabasas Road. Fire crews responded and found the Lobo Fire burning on a hillside. Ground and helicopter crews from the Los Angeles County Fire Department were assisted by […]
CALABASAS, CA・2 DAYS AGO
KTLA

Crews with the Los Angeles Fire Department were battling a vegetation fire off the westside of the 110 Freeway, near Avenue 26, in the area of Cypress Park Friday afternoon. KTLA’s Mike Case, reporting from over the scene in Sky5, said the fire appeared to be less than an acre and that firefighters had the […]
LOS ANGELES, CA・4 DAYS AGO
KTLA

Yes, you should have filled up yesterday. Gasoline prices in California shot up 8 cents per gallon Tuesday to an average of $5.883/gallon for regular unleaded, according to AAA. That’s 42 cents higher than one week ago and 60 cents more than one month ago. In the Los Angeles-Long Beach area, the average is $5.96/gallon. […]
LOS ANGELES, CA・4 HOURS AGO