Police searching I-93 for evidence in deaths of mother, 2 young sons 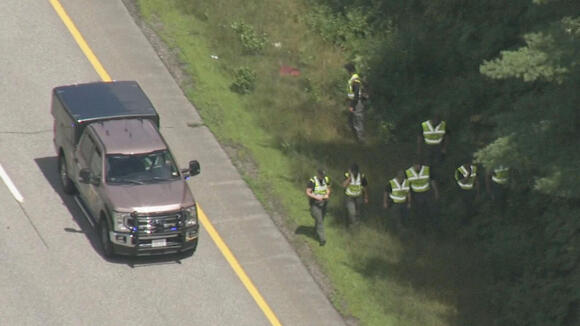 CONCORD, N.H. - State and local police investigating the shooting deaths of a mother and her two young sons are searching a large area of Route 93 in New Hampshire for evidence.

Twenty-five-year-old Kassandra Sweeney, her 4-year-old son Benjamin and 1-year-old son Mason were found dead in their home on Wethersfield Drive in Northfield exactly one week ago on August 3.

Autopsies showed each died from a single gunshot wound and the medical examiner ruled all three deaths as homicides.

There have been no arrests, but Attorney General John Formella said investigators have identified everyone involved in the shooting deaths and there's no threat to the public. When asked last week if police had the weapon involved, Formella said he could not comment.

In a statement Wednesday, his office said investigators will be "in the area of Route 93 between exits 17 and 20 in Concord, Canterbury, and Tilton," looking for "physical evidence."

"The search activity is not the result of new information in the case but is part of the ongoing investigative process," Formella said in the statement. "Officials ask that the public follow all road signage in the area and provide investigators appropriate space to complete their work."

BEVERLY - A seal that's been hanging out in a pond in Beverly took a trip to the police station overnight and turned himself in."Shoebert," as he's been nicknamed, had been in Shoe Pond for the last week. Authorities hoped he would swim back to the ocean on his own.Instead, he crawled out of the pond early Friday morning and went to the police station - all on his own.In a Facebook post, police said he "traveled through the Cummings Center parking lot and came to the side door of the police station for some help" at 2:30 a.m."Within a...
BEVERLY, MA・1 DAY AGO
CBS Boston

"A slap in the face": Waltham pushes for accessible mailboxes

WALTHAM - At 79 years old, Carol Watts has lived in Waltham for roughly half of her life. The retired teacher lives alone with her dog, Eva, but keeps busy otherwise. Watts said she ran into mobility issues over the past few years. "I can walk but now I am having a hard time walking without a cane and if I am going any distance, without a walker," said Watts. For the past five years, Watts said she has been in a constant battle over USPS drop-boxes in Waltham. Specifically, the lack of accessible ones for those with mobility challenges. Watts pointed out...
WALTHAM, MA・2 DAYS AGO
CBS Boston

BEDFORD - The Wall That Heals, a three-quarter scale replica of the Vietnam Veterans Memorial in Washington DC, is now in Bedford.It arrived at Edith Nourse Rogers Memorial Veterans Hospital on Springs Road Wednesday and officially opened to the public early Thursday morning."I'm overwhelmed really. The raw emotion that everyone who walks through, someone has a husband, a father, an uncle, they were there," said Laurel Holland who works for the VA Bedford Healthcare System and made it her mission to bring the wall to the facility. "Here's permission for people to talk about those stories locked in their hearts....
BEDFORD, MA・2 DAYS AGO
CBS Boston

MANCHESTER, N.H. - With the season premiere of "Survivor" Wednesday night, a New Hampshire athlete will be front and center. Noelle Lambert played Division 1 lacrosse at UMass Lowell, but in 2016, she lost a leg in a moped accident. In the years since, she's become a record-breaking Paralympian and started a foundation to help other amputees. Now, her next challenge is to win "Survivor." "I wanted to be the first amputee to ever win the game!" Lambert said. After setting the record for the 100-meter dash at the Paralympic games in Tokyo, she became a competitive snowboarder before setting her sights on "Survivor...
MANCHESTER, NH・2 DAYS AGO

MEDFORD - The new Orange Line cars are up and running and the old ones are heading to the scrap heap.Flatbed trucks hauled away two 40-year-old trains from the Wellington Yard and Maintenance Facility in Medford Thursday morning. More will be taken away next week.The MBTA said they'll be turned into scrap metal at the Costello Dismantling Company in Middleboro.The old cars are being replaced by an entirely new fleet of 152 cars that the T calls "state-of-the-art."
MEDFORD, MA・2 DAYS AGO
CBS Boston

STOW – Town officials have confirmed that an invasive species of insect called the spotted lanternfly has been discovered in Stow.The small insect can damage vineyards, orchards and other agriculture.Stow officials said that is particularly concerning with several orchards in town.Anyone who has grape vines or apple trees is asked to check the base of their trees for any signs of the insect and notify the town if they see one.
STOW, MA・3 DAYS AGO