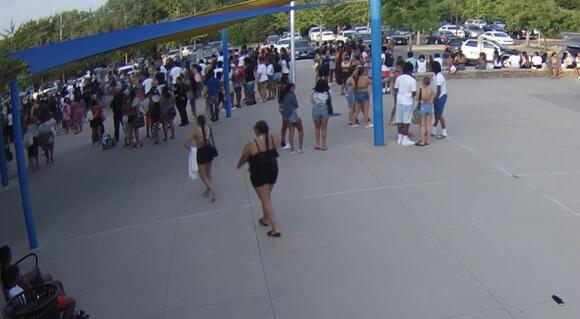 The family who reserved the popular water park said they felt they were racially discriminated against .

However, when they showed up for Saturday’s party, pool managers wouldn’t allow them inside the park, and canceled the party. Water park directors told the family they were uncomfortable with the gathering.

“It appears to have been canceled simply because the park staff was uncomfortable with a group of Black teenagers having a pool party to enjoy the end of the summer,” said Chris Evans, the teens’ father.

“Unfortunately, statements were made by a Parks and Recreation manager at Summit Waves that were inappropriate and insensitive,” Baird said in a statement.

The parks department said it completed an internal review and identified “missed processes and miscommunication that led to the cancellation.”

“A sincere apology is owed to the Evans family and our Lee’s Summit community,” Lee’s Summit Parks and Recreation said in a statement. “LSPR strives to be a respectful and inclusive organization where all members of our community feel welcome and appreciated. Inappropriate language, social media posts and behavior are not acceptable and will not be tolerated.”

Lee’s Summit Parks and Recreation also said it received calls from other parents asking about party details and safety concerns.

LSPR decided to cancel the party at 5 p.m. Saturday. The event was scheduled for 7:30 p.m.

“Safety pertaining to the anticipated crowd size and the potential impact it might have on party guests and the staff was the sole reason for the cancellation,” LSPR said in a statement.

The department says they heard back from the family at 5:30 p.m. and staff notified them the party was canceled. Evans refutes that, saying they didn’t hear from the park until they showed up for the party.

LSPR said the family arrived at Summit Waves at 6:15 p.m., and staff again told them the event had been called off.

Lee’s Summit police estimated about 500 people were there between 7-7:30 p.m., twice the number Summit Waives said it agreed to for the event. But Evans said staff and police could have been confused by partygoers showing up and guests leaving when the water park when it closed for the event.

However, the department said through its investigation, it learned that Summit Waves staff failed to arrange required security for the party.

Then on Sunday, the parks department said it learned a Summit Waves lifeguard made a “disturbing” social media post.

“The comments were appalling and not condoned by Parks and Recreation, and are inconsistent with the culture I know the City of Lee’s Summit strives to reflect,” Baird said.

Lee’s Summit Parks and Recreation said its administrator contacted the family and apologized for the incident on Saturday as well as the social media post.

The department said it has given the family a refund, and the family’s attorney said they’ve also been offered a free party. But that attorney said legal action isn’t outside the realm of possibility at this point.

The parks department said the administrator and family have agreed to a follow-up conversation Wednesday to continue discussions.

“LSPR intends to complete a comprehensive review of the rental process, including communication. LSPR will also enhance training to align with the city’s diversity and inclusion efforts. LSPR is committed to serving all people in our community and providing exceptional parks and recreation experiences for everyone,” the department said.

It wasn’t racial motivated, they broke the contract by putting it on social media and over double the people they stated. Fed up with this race card business if they don’t get their way.

Why apologize? This was a breach of contract (posting on Facebook). The crowd was over capacity. Cancelling it saved lives. Don’t Apologize! Stand up for what you believe is right. If you know instinctively that you saved lives but not allowing the over capacity, uncontrollable event. State that without apology.

Even the comments here show racism is alive & well in the USA! No group shows up en masse to any party; they stagger in. They needed only allow entry to the first 200 arrivals & deny those following. Who counted the individuals prior to denying them entry? If the answer is, No one; there MUST BE another reason other than numbers!

Eighty open cases of child abuse and neglect sat on Matt Cordova’s desk in 2017 during the height of the “hole I found myself buried in,” he remembers. Twenty open cases would have been a lot to handle; 80 was impossible. An investigator at Missouri’s child welfare...
MISSOURI STATE・17 HOURS AGO
FOX 2

Olga and Travone Mister did not know until after their child drowned in July that summer camps in Missouri are completely unregulated.
SAINT LOUIS COUNTY, MO・2 DAYS AGO
FOX 2

An investigation is underway after two women were shot and one was killed Saturday afternoon near the area of a St. Charles casino.
SAINT CHARLES, MO・1 DAY AGO

The Major Case Squad of Greater St. Louis has been activated to investigate a homicide in St. Ann.
SAINT ANN, MO・1 DAY AGO
FOX2Now

‘Most dangerous woman in America’ is buried in Macoupin County, Illinois

MT. OLIVE, Ill. – The Miners Union Cemetery is not very big. Located in Mt. Olive, Illinois, and surrounded by farmland, about halfway between St. Louis and Springfield, you wouldn’t notice the cemetery from Interstate 55. It’s a short drive to the cemetery from the interstate; a little...
MACOUPIN COUNTY, IL・5 HOURS AGO
FOX 2

The State Historic Society of Missouri is already starting to collect memorabilia since Route 66 will turn 100 on April 30th, 2026.
MISSOURI STATE・3 DAYS AGO

A St. Louis man accused of stealing more than $300,000 in a series of scams is behind bars in St. Charles County.
SAINT LOUIS, MO・2 DAYS AGO
FOX 2

Drivers beware: Deer on the move can lead to more crashes

Autumn is here and that means the risk of hitting deer on roads and highways is rising.
MISSOURI STATE・2 DAYS AGO
FOX 2

For those born prior to 1967, the MDC says it's a good idea to take the Hunter Safety Course, even though it's not required.
MISSOURI STATE・3 DAYS AGO

ST. CHARLES, Mo. – A St. Charles man has been charged in a double shooting that claimed the life of his own sister. According to Lt. Tom Wilkison, a spokesman for the St. Charles Police Department, the shooting happened just around 3:30 p.m. at an apartment in the 100 block of Ameristar Boulevard, near the Ameristar Casino and Resort.
SAINT CHARLES, MO・9 HOURS AGO
FOX 2

Man takes on St. Louis County roads, hundreds of miles for ‘Pedal The Cause’

Jeff Prince will cover a lot of pavement around the St. Louis area over the next few days.
SAINT LOUIS COUNTY, MO・2 DAYS AGO
FOX 2

Several school districts in the Metro East are expected to receive millions in additional funding as part of an Illinois initiative.
ILLINOIS STATE・1 DAY AGO
FOX 2

Police: Inmates got out of Illinois jail with pandemic loans

More than two dozen people have been charged in Illinois with fraudulently obtaining pandemic relief money.
JOLIET, IL・3 DAYS AGO

How recent weather will affect trees, fall colors in Missouri

Maps of the old mines under Missouri and Illinois

ST. LOUIS, Mo. – A train went off the rails Monday near Albers, Illinois. There are reports of mine subsidence in the area. It isn’t clear if the crumbling underground caverns are connected to the crash. But, it is worth exploring where the old mines are located in Missouri and Illinois. The cracking or sagging ground has damaged homes, businesses, roads, and schools.
ILLINOIS STATE・2 DAYS AGO
FOX 2

Where Missouri and Illinois place on the ‘happiness ranking’

ILLINOIS (WCIA) — Illinois may want to adopt Bobby McFerrin’s 1988 hit “Don’t Worry, Be Happy” as its new state song. The Land of Lincoln was ranked No 8. in a recent report on 2022’s Happiest States in America. The story is a little different on the other side of the Mississippi River. Missouri ranks […]
MISSOURI STATE・2 DAYS AGO
FOX 2

A strong storm rolled through St. Clair County just before 8:30 p.m. Wednesday. The storm produced torrential rain and some strong wind gusts that damaged a historic building in Freeburg.
FREEBURG, IL・3 DAYS AGO