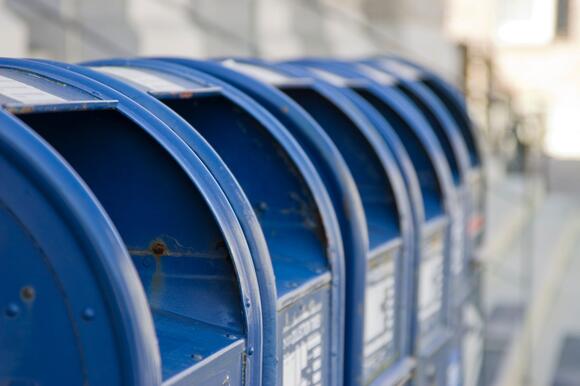 The Jefferson Parish Sheriff’s Office says they have arrested two teens from New Orleans after deputies responding to a disturbance call at a Terrytown hotel, found the teens with checks stolen from USPS blue mailboxes.

Investigators say over the weekend, the hotel manager called the police regarding a problem with two guests at the hotel. When deputies knocked on the hotel room door, 18-year-old Kyron Fountain of New Orleans and 19-year-old Demetrius Haynes of Algiers, answered the door and deputies found them in possession of dozens of blank and freshly manufactured fraudulent checks.

"We've said it before, and it's time to say it again: please stop using the blue mailboxes found outside of post offices and in other locations around the community," said JPSO in a Facebook post. "Your personal information, your bills, even your grandmother's birthday card--none of them are safe if you deposit them into one of those boxes."

Two men arrested in drive by shooting in Gray

Terrebonne Sheriff’s Violent Crimes Detectives have arrested two men in connection with a shooting. Rontrell Leon Holmes, a 20-year-old man from Gray, and a 17-year-old juvenile were both taken into custody as part of their investigation.
GRAY, LA・18 HOURS AGO
WWL-AMFM

New Orleans Police say they have apprehended a suspect after a manhunt shut down Canal Street near N. Lopez Street in Mid-City this afternoon.
NEW ORLEANS, LA・1 DAY AGO
WWL-AMFM

A shooting in New Orleans East has sent multiple people to the hospital, including a law enforcement officer. There is a crime scene on the on the I-10 between Read and Crowder.
NEW ORLEANS, LA・1 DAY AGO
WWL-AMFM

Four officers with the Orleans Levee District have been arrested and are facing numerous charges of alleging fraud. The four are accused of taking off duty security shifts and then not showing up or leaving early.
NEW ORLEANS, LA・17 HOURS AGO

Cops say a woman pulled into the path of an 18-wheeler in Tangipahoa Parish and died. A child in her car was seriously injured. “Troopers from Louisiana State Police Troop L began investigating a two-vehicle fatal crash on LA Hwy 10…
TANGIPAHOA PARISH, LA・1 DAY AGO
WWL-AMFM

A New Orleans real estate agent says crime is taking its toll on the housing market. Craig Mirambell is a real estate agent. He says the market is heading into territory it’s never seen before
NEW ORLEANS, LA・20 HOURS AGO
WWL-AMFM

A 14-year-old student at Monteleone Junior High School has been arrested after admitting he told another student he planned to blow up the school, the St. Tammany Parish Sheriff’s Office said Monday.
MANDEVILLE, LA・3 DAYS AGO
WWL-AMFM

Police today announced the arrest of a man for the alleged sexual abuse of three children in Lafourche Parish. “Sheriff Craig Webre announced a Lockport man has been charged with sex crimes involving juveniles. Cullen Curole, 24, was arrested,”
LOCKPORT, LA・3 DAYS AGO
WWL-AMFM

Cops says they have arrested a drunk driver who fled the scene of a Westbank crash that left one person dead and another in the hospital. “Sheriff Joseph Lopinto reports that the Jefferson Parish Sheriff’s Office is investigating a fatal hit-and-run
HARVEY, LA・3 DAYS AGO
WWL-AMFM

Shootings in New Orleans this year are more likely to be fatal compared to previous years. The Metropolitan Crime Commission sees a number of reasons for that.
NEW ORLEANS, LA・2 DAYS AGO

Double shooting in Center City under investigation. NOPD is investigating a shooting in the 3500 block of Erato Street between Tonti and Galvez Streets.
NEW ORLEANS, LA・1 DAY AGO
WWL-AMFM

Man fills duffel bags with stolen stuff at drug store, gets away on moped

Cops in St. Charles Parish are asking for help catching a crook they say filled bags with stolen merchendise at a drug store and made a slow speed getaway.
DESTREHAN, LA・6 DAYS AGO
WWL-AMFM

A spokesperson for the New Orleans Police Department said a man was pronounced dead at the scene of the crash on Parish Avenue in the Seventh Ward.
NEW ORLEANS, LA・4 DAYS AGO
WWL-AMFM

Driver turns self in after hitting cop car, fleeing

Northshore authorites say a man has surrendered to cops after hitting a police car and driving away. “Christopher Lozier Jr. (DOB 6-7-92) of Carriere, Miss., turned himself in to the St. Tammany Parish Sheriff’s Office today (October 1).
CARRIERE, MS・5 DAYS AGO
WWL-AMFM

Deputies took Leonte Poindexter into custody at the airport just after 7 p.m. Thursday after getting some help from other law enforcement agencies.
TERREBONNE PARISH, LA・6 DAYS AGO
WWL-AMFM

La. AG says NOLA is ‘being run like a third-world country’

Louisiana Attorney General Jeff Landry, a Republican gubernatorial candidate, said that New Orleans – the largest city in his state – is “being run like a third world country” this week.
NEW ORLEANS, LA・9 HOURS AGO
WWL-AMFM

New Orleans Police homicide detectives are investigating a fatal shooting on the I-10 near the Superdome. This would be the 218th homicide this year in New Orleans, tying the total number of homicides recorded in all of 2021.
NEW ORLEANS, LA・6 DAYS AGO