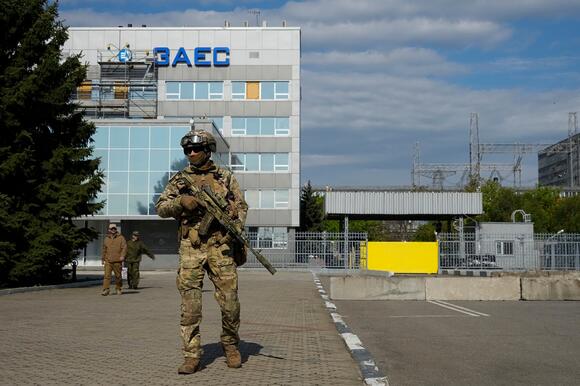 Russia has created a “major” new ground forces corps in an attempt to strengthen its offensive in eastern Ukraine , according to British military intelligence.

In its latest update on the Ukraine war, the UK Ministry of Defence ( MoD ) said that the Kremlin has formed the 3rd Army Corps (3AC) in Nizhny Novgorod Oblast, east of Moscow.

“Volunteer” battalions will likely form the bulk of its size, the MoD said.

Although potential soldiers are said to have been offered significant cash bonuses, it is thought that the Putin regime will struggle to meet its recruitment targets.

“A Russian army corps typically consists of 15-20,000 troops, but it will probably be difficult for Russia to bring 3 AC up to this strength, given very limited levels of popular enthusiasm for volunteering for combat in Ukraine,” the MoD said.

The department added that the new military formation is “unlikely to be decisive” in Russia’s campaign to annex Ukraine’s Donbas region, which has reportedly slowed due to a shortage of troops.

Russia has been hampered by significant military losses, with the US estimating that around 80,000 of the Kremlin’s soldiers have been killed or wounded since it invaded Ukraine on 24 February.

Moscow’s commanders are also being stretched by a Ukrainian counteroffensive in the south, where Kyiv hopes to recapture the city of Kherson.

Valentyn Reznichenko said the attacks damaged more than 20 buildings in Marganets, a city near the Dnipro river, and cut off electricity to thousands of homes.

The shelling came shortly after a series of explosions hit Crimea , a peninsula Russia took from Ukraine in 2014. Plumes of smoke erupted on Tuesday afternoon above the Saky military base in Novofedorivka, which is located more than 100 miles from the frontline.

Kyiv denied responsibility for the incident, saying the explosions, which killed one person and injured a further eight, could have been caused by saboteurs.

“People who are living under occupation understand that the occupation is coming to an end,” Mykhailo Podolyak, one of Ukrainian president Volodymyr Zelensky’s aides, said.

Mr Zelensky said Crimea would return to Ukraine in the future. “We will never give it up…the Black Sea region cannot be safe while Crimea is occupied,” he said.

“This Russian war against Ukraine and against the entire free Europe began with Crimea and must end with Crimea – with its liberation.”

By volunteer force they mean they found some prisoners and gave them an option to fight or stay in prison.

US would destroy Russia’s entire army if Putin use nukes in Ukraine, says former CIA director

The US and its allies would eradicate Russia’s military troops in Ukraine and sink its Black Sea fleet if Vladimir Putin uses nuclear weapons, said former CIA director David Petraeus. “Just to give you a hypothetical, we would respond by leading a Nato – a collective – effort that...
MILITARY・2 DAYS AGO
The Independent

Kyiv’s army is carrying out a “fast and powerful” advance in Ukraine to push back the Russian forces in country’s south, recapturing “dozens of settlements” absorbed by Moscow’s illegal annexation, President Volodymr Zelensky has claimed. In his late night address on Tuesday, Ukraine’s...
POLITICS・3 HOURS AGO
The Independent

Russian shelling of eight Ukrainian regions over the past 24 hours has killed two civilians and injured 14 more, Ukraine’s presidential office reported Monday. A missile strike has been carried out on the city of Zaporizhzhia, capital of the Zaporizhzhia region, parts of which are under Russian control and which has been illegally annexed by Moscow.
MILITARY・2 DAYS AGO

Vladimir Putin has ordered Russia to take control of the Zaporizhzhia nuclear plant – but Kyiv has urged Ukrainian workers there not to sign any documents handed to them by Russian occupiers. The Russian president ordered the Kremlin to take control of Europe’s largest nuclear power plant, located in one of the four regions in southern Ukraine that he recently annexed.“The Zaporizhzhia nuclear plant is now on the territory of the Russian Federation and should be operated under the supervision of our relevant agencies,” Russian state news agency RIA Novosti reported quoting deputy foreign minister Sergei Vershinin.Russia’s nuclear power...
ENERGY INDUSTRY・58 MINUTES AGO
The Independent

Attorneys working for former president Donald Trump’s failed 2020 re-election campaign mocked his lack of financial liquidity and his rampant violation of the US Constitution in emails released in a court filing by the House January 6 select committee.The panel has been engaged in a court battle to obtain emails from John Eastman, the ex-Chapman University law professor who formulated plans for Mr Trump to overturn the election with fake slates of electoral votes, and other attorneys working with the campaign. Committee attorneys said in a filing that Mr Eastman has deliberately mischaracterised multiple emails as being covered by...
ELECTIONS・21 HOURS AGO
The Independent

Trump launches into bizarre rant about ‘dirty, crowded’ US airports

Donald Trump has launched into a rant about the US’s airports, calling them a “dirty, crowded mess”. Speaking at a “Save America” rally in Warren, Michigan on Saturday, Mr Trump lashed out at the country’s aviation hubs. He complained that air ticket prices are...
POTUS・7 HOURS AGO
The Independent

The widow of murdered journalist Jamal Khashoggi has called on America’s top US intelligence official to help retrieve his cellphone to see if it was infected with spyware – a bid to uncover more details about his killing.Four years after Khashoggi was killed in an operation carried out by Saudi agents inside a consulate in Turkey, Hanan Hanan El-Atr Khashoggi, has written to Avril Haines, the director of national intelligence, asking for her help in recovering his devices – two mobile telephones, one laptop and one tablet.She says these are in the possession of the Turkish authorities and that they...
PUBLIC SAFETY・1 DAY AGO

Former president Donald Trump nixed plans to host Taliban officials at Camp David for talks on withdrawing US forces from Afghanistan after one of his advisers questioned whether his daughter and adviser Ivanka Trump would need to wear the head-to-toe garment which women under Taliban rule must don before leaving their homes.
POTUS・1 DAY AGO
The Independent

An Irishman has been killed while fighting in Ukraine, his family has confirmed.Rory Mason, 23, from Dunboyne in Co Meath, died while fighting for Ukraine’s International Legion near the Russian border.The Mason family learnt of his death from the Department of Foreign Affairs, which is providing consular assistance.The family said they are in contact with representatives of the International Legion for the Defence of Ukraine, for which he enlisted last March.Rory was never political but he had a deep sense of right and wrong and an inability to turn the other way in the face of injusticeRob MasonMr Mason’s family...
EUROPE・1 HOUR AGO
The Independent

Belarus’ opposition leader said Wednesday that she believes Russian military setbacks in Ukraine could shake the hold on power of Belarusian President Alexander Lukashenko. “We have a distracted Russia that is about to lose this war. It won’t be able to prop Lukashenko up with money and military support as in 2020,” said Sviatlana Tsikhanouskaya, speaking at a security conference in Warsaw.
POLITICS・9 HOURS AGO
San Diego Union-Tribune

Russia has devised yet another way to spread disinformation about its invasion of Ukraine, using digital tricks that allow its war propaganda videos to evade restrictions imposed by governments and tech companies.Accounts linked to Russian state-controlled media have used the new method to spread dozens of videos in 18 different languages, all without leaving telltale signs that would give away the source, researchers at Nisos, a U.S.-based intelligence firm that tracks disinformation and other cyber threats, said in a report released Wednesday.The videos push Kremlin conspiracy theories blaming Ukraine for civilian casualties as well as claims that residents of areas...
WORLD・6 HOURS AGO
The Independent

Student protesters in Tehran, Iran ‘trapped on campus and shot at’ during clashes

Students at a university in Tehran, Iran were reportedly targeted by police with gunshots and trapped on campus, according to social media.A number of students at the prestigious Sharif University of Technology are said to have clashed with police on Sunday, during ongoing anti-government protests following the death of 22-year-old Mahsa Amini.Ms Amini – also known by her Kurdish-heritage name, Jina Amini – died on September 16 after being detained by so-called ‘morality police’ for allegedly breaking the country’s strict dress code during a visit to the capital city.Officials say Ms Amini suffered from sudden heart failure, but her family...
PUBLIC SAFETY・2 DAYS AGO
The Independent

US envoy blames Houthis for failure to extend cease-fire

The U.S. envoy to Yemen on Wednesday blamed rebel Houthi leaders for the recent failure to extend the country's cease-fire agreement, accusing them of making last-minute ‘maximalist demands' that derailed constructive negotiations. Yemen’s warring sides failed to reach an agreement to extend the nationwide truce Sunday, threatening to reignite the country’s bloody civil war after a six-month cessation in front-line fighting.During a news conference, U.S. Special Envoy to Yemen Tim Lenderking said the Houthis ‘hijacked' the negotiations by suddenly demanding the salaries of their military and security personnel be paid before that of Yemeni civil servants. Lenderking did not...
POLITICS・1 HOUR AGO
The Independent

The White House had searing words for the oil-producing nations of Opec+ on Wednesday following news that the bloc would cut oil production by 2m barrels per day.Speaking with reporters aboard Air Force One, Karine Jean-Pierre called the decision “short-sighted” and a “mistake”, while adding that it showed a clear decision by the trading bloc to line up against the US and the west.“It’s clear that Opec+ is aligning with Russia with today’s announcement,” she told reporters.Ms Jean-Pierre did not go as far as to call it a “hostile act” following a question from a reporter, but reiterated that...
POTUS・1 HOUR AGO
The Independent

The largest aircraft carrier in the world has been sent out on its first deployment: The USS Gerald Ford left Norfolk, Virginia on Tuesday, heading out into the Atlantic. The ship’s deployment comes after delays that have lasted years and cost billions of dollars – $13bn in all. This specific aircraft carrier has a range of new technologies, such as “electromagnetic catapults that can launch planes and advanced weapons elevators that will move bombs and missiles up to the flight deck,” according to Insider. Washington Post reporters Robert Costa and Bob Woodward wrote in their new book Peril that...
POTUS・37 MINUTES AGO
The Independent

Liz Truss drew the ire of campaigners and some in her own party after blaming the UK’s economic woes on a supposed “anti-growth coalition” of opposition parties, trade unions, thinktanks, environmentalists and opponents of Brexit in her first Tory conference speech as leader.Countryside campaigners the CPRE said the prime minister’s “disingenuous and misleading” broadside presented a “false choice between the economy and the environment”, while Tory former cabinet minister Stephen Dorrell branded her comments “Orwellian”.One minister in Boris Johnson’s government said of Ms Truss’s claim of an “anti-growth coalition”: “The obvious question is – how many Conservatives does she...
POLITICS・2 HOURS AGO