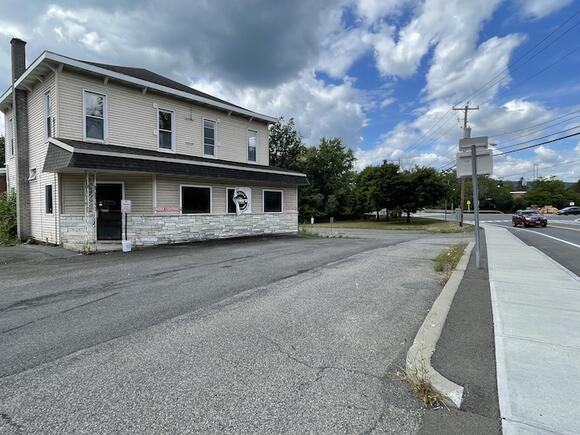 A banner hanging across the facade of the former Smith’s Tavern promises “Coming Soon,” sandwiched by “Under Contract” signs to indicate the vacant restaurant space will soon usher patrons inside for the first time in five years.

Romo’s Pizzeria & Restaurant has developed into a popular eatery among regional restaurant-goers since it first opened at the Glenmont Plaza in 2009. The eatery has been named among the area’s best pizzeria’s over the years; winning best pizza by Capital Region Living Magazine and having been mentioned as a top pizzeria in the Times Union.

The menu from the Glenmont location features Romo’s classic recipe, including Sicilian and Chicago deep dish pizzas, Neopolitan and artisanal style pizzas — all using ingredients sourced from across the country.

The 112 Maple Ave. location was recently listed for $799,000 before Romo’s owner Anthony Berghela purchased the property in June. The 3,368-square-foot building is to be renovated to accommodate the new eatery with plans to open doors in late 2022 or early 2023.

The site is a threshold of sorts, an ideal place for business as motorists drive to and from Albany along Route 85A each day. Nonetheless, it has remained vacant since Jon McClelland and John Mellen closed Smith’s Tavern in 2017.

The property was immediately the source of a tug of war as Stewart’s Shops attempted to convert the site for one of its convenience stores. Resident concerns with installing a fuel station next door to an existing Mobil Gas station influenced Village Hall to pass a commercial development moratorium before crafting a comprehensive plan. Officials from the Saratoga-based store chain grew frustrated over the delay before they ultimately abandoned their plans for the property.

Smith’s Tavern was opened as a hotel at the turn of the 19th century. owned by Frank L. Smith opened it as a tavern shortly before World War II, lending his name to the new restaurant. He’d later pass the business down to his son, Frank Smith Jr., who introduced hand-made pizza with his wife, Gert. McClelland and Mellon bought the tavern from Frank and Gert Smith in 1991.

DELMAR – These are the Police briefs that appeared in September 21 edition of The Spotlight. Delivery driver charged in assault SELKIRK – Bethlehem police responded to a report of […]
ALBANY, NY・6 HOURS AGO
Spotlight News

The family of the late Meghan Marohn is holding a service for the former Shaker High English teacher on Saturday, Oct. 1. Marohn, who was living in Delmar taking care […]
DELMAR, NY・3 HOURS AGO
Spotlight News

SLINGERLANDS – The inaugural Fall Festival and 5K on the Albany County Helderberg-Hudson Rail Trail and Firefighter’s Memorial Park kicked off on a brisk Saturday morning, Sept. 24 from the […]
ALBANY, NY・2 DAYS AGO
Spotlight News

COLONIE — The Planning Board advanced a 4,900-square-foot building that would house a takeout restaurant and a retail establishment at its last meeting. The plan was presented by Nick Costa, […]
COLONIE, NY・5 DAYS AGO

COLONIE — “Speed and alcohol are considered to be contributing factors” to a Sept. 24, fatal motorcycle crash on Central Avenue, according to police. According to police, the motorcyclist was […]
COLONIE, NY・6 HOURS AGO
Spotlight News

SPOTTED: The Crossings 5K Challenge to benefit the CYC

GUILDERLAND — A familiar face from childhood has moved into Macy’s in Crossgates Mall. Geoffrey the Giraffe is now a permanent resident at Macy’s, representing the Toys ‘R’ Us brand […]
GUILDERLAND, NY・4 DAYS AGO
Spotlight News

COLONIE — Everyone loves a parade. Especially when it was held to celebrate a centennial. Or, in this case 100+1. The Village of Colonie continued its 100th birthday celebration on […]
COLONIE, NY・8 DAYS AGO
Spotlight News

Albany Airport gets $60 million from state

COLONIE — The Albany International Airport will receive $60 million in state money to help complete $100 million project that will modernize security checkpoints and expand the terminal. The grant […]
ALBANY, NY・4 DAYS AGO
Spotlight News

Voorheesville Public Library news: The Great Give Back

This year, the library will be supporting “Sleep in Heavenly Peace” for our community wide donation drive. SHP is a volunteer organization that builds beds for kids (ages 3-17) who […]
VOORHEESVILLE, NY・5 DAYS AGO

COLONIE —In 2018, the developers of a senior housing complex on Forts Ferry Road were approved to construct a three-story, 90,000-square-foot 62-unit apartment building and a two-story, 30,000-square-foot office building. […]
COLONIE, NY・6 DAYS AGO
Spotlight News

Let’s band together to read banned books. The Capital Region Chapter of the New York Civil Liberties Union is teaming up with the Upper Hudson Library System to celebrate our […]
ALBANY, NY・5 DAYS AGO
Spotlight News

Second phase of warehouse project given go ahead

COLONIE — The Planning Board, by unanimous decision, gave final approval to the construction of five warehouses at the former 28-acre B&H Railroad site at the intersection of Lincoln Avenue […]
WATERVLIET, NY・6 DAYS AGO
Spotlight News

Sick and dead birds at The Crossings in Colonie

COLONIE — The town closed the walking paths and waterfront around the pond at The Crossings after finding dead and sick waterfowl. The town’s Animal Control Unit have removed the […]
COLONIE, NY・4 DAYS AGO

COHOES — Kevin Reid has a look about him that draws strangers in and a singing voice that demands they accompany him. As Reid tells the story, he was walking […]
COHOES, NY・4 DAYS AGO
Spotlight News

SARATOGA SPRINGS — Michael Eck was ushered into a music career by thunderous applause following his first live performance in a high school gymnasium 40 years ago. It was Friday, […]
SARATOGA SPRINGS, NY・6 DAYS AGO
Spotlight News

GLENMONT — Stewart’s Shops expansion proposal for Frontage Road stands one board away from fruition, and it can’t come soon enough for Johnny B’s Glenmont Diner. John Behiri, the eponymous […]
GLENMONT, NY・13 DAYS AGO