Passenger accuses American Airlines of racism, saying it barred her from boarding a delayed flight because of her tone of voice 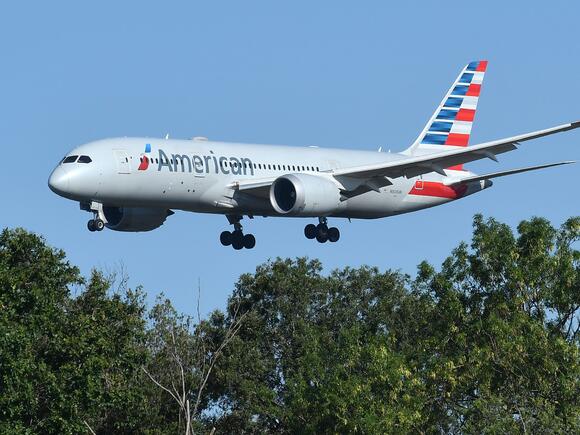 A passenger accused American Airlines of racism, saying the carrier barred her from boarding a delayed flight because of the tone of her voice.

Kyleema Norman tweeted on Sunday that her flight from LaGuardia Airport in New York to Grenada in the Caribbean had been delayed by three hours because of mechanical problems. Later, Norman, who's Black, tweeted that the airline had prevented only her and her daughter from getting on the plane because Norman "spoke up."

Norman told the Post that a staff member told her: "Your tone at 35,000 feet — I don't think I'd be able to trust you'd be safe in the air with a pilot and other people."

Norman, whose LinkedIn page indicates she works at the New York City Department of Education, said she'd spoken to a staff member in her "teacher voice" to express concern about the flight delay. "I didn't curse him, threaten him, show bodily harm or make a scene," she added.

Norman said in another tweet that she had been denied the option of rebooking her flight or obtaining her luggage. In response to one of Norman's tweets, American Airlines said : "Delays can be very upsetting. Please continue to work with the airport team for assistance with any possible rebooking."

The following day Norman said she'd tried to get in touch with the company but staffers told her they couldn't help. American Airlines said in a reply to her tweet that "it will take some time to review what happened at the gate."

Norman posted a video on Twitter of what she said was her conversation with Port Authority police officers about the situation at the airport.

"This is what @AmericanAir is calling erratic behavior!" she said in the tweet. "Please watch. At which point do I look like a threat to anyone's safety!"

American Airlines and Norman didn't immediately respond to Insider's requests for comment outside of US operating hours.

An American Airlines representative told the Post that it took all discrimination claims seriously and was investigating the incident internally. The representative said the airline's customer-service team was in contact with Norman to find out more about what happened and apologize.

Norman said in a tweet that the trip to Grenada was a graduation present from her and her husband to their daughter. "Who knew the gift would be her watching me getting banned from our flight on American Airlines and witnessing the outrage of racism," Norman said.

The Post said it obtained emails showing that the passenger-refunds department referred Norman to her travel agency for reimbursement but the agency referred her back to American Airlines.

It's a private company they can do what they want. On a serious note though don't give staff at the airport attitude it's only asking for trouble. Also the accusation of racism is completely without meaning now because of people like her, now racism simply means you disagreed with or did something a person of another race didn't like.

Talked to the agent in her “teachers voice”! Not threatening..no sir!! Listen to me or you will have to stay after school or go the principals office! Everyone else was delayed and this lady is sooo so special that she gets to teach the gate agent!!! Special person alert!!

ALWAYS able to fall back on THAT RACE CARD when things don’t go your way. Yet, thousands of others experienced delayed or cancelled flights without incident. Seems like that “chip on her shoulder” would be tiresome.

Alexander Tung Cuu Le was arrested and later charged following the incident on a flight from Mexico to Los Angeles on Wednesday.
LOS ANGELES, CA・2 DAYS AGO
Business Insider

The 45th president is worth $3 billion, according to Forbes, and is the only billionaire to enter the White House. Take a look at his property empire.
POTUS・2 DAYS AGO
Business Insider

The cabin crew from AlbaStar Air reportedly told the woman that disabled people should wear diapers on planes to avoid using the bathroom.
BEHIND VIRAL VIDEOS・2 DAYS AGO

Roughly a dozen investment bankers said their farewells to Goldman Sachs on Friday. Senior associates and vice presidents in Goldman's tech, media, and telecommunications team were handed pink slips in a further sign of strain on a Wall Street apparatus that is hamstrung by depressed dealflow, and suffering from a slowing economy and stubbornly high inflation.
BUSINESS・13 HOURS AGO
Business Insider

The Bud and Breakfast is taking off as more people are booking marijuana friendly vacation rentals when they travel to places where its legal.
TRAVEL・1 DAY AGO
Business Insider

Lawsuit filed after FBI agents raided 1,400 deposit boxes at a US Private Vaults branch claims owners' items have still not been returned

A lawyer involved in the class-action suit called the March 2021 FBI raid of the Beverly Hills branch the "largest armed robbery in US history."
BEVERLY HILLS, CA・1 DAY AGO
Business Insider

A British Airways flight was forced to make an emergency landing after its cockpit windshield 'broke' mid-air, passenger says

Caroline Edmunds tweeted a picture of the Airbus's windshield covered in cracks after landing in Athens on Saturday afternoon.
PUBLIC SAFETY・1 DAY AGO

Hi, I'm Matt Turner, the editor in chief of business at Insider. Welcome back to Insider Weekly, a roundup of some of our top stories. Goldman Sachs insiders are concerned about CEO David Solomon's push to build his personal brand. Wall Street's biggest investors fear an economic nightmare is coming....
BUSINESS・1 DAY AGO
Business Insider

'Fat Leonard,' who pleaded guilty to involvement in a US Navy bribery scandal, was caught in Venezuela. The US has 30 days to request extradition.
POLITICS・1 DAY AGO
102.5 The Bone

Canada will no longer require masks on planes, will drop vaccine mandate

TORONTO — The Canadian government on Monday announced that on Saturday, October 1, that masks on planes will no longer be required as well as their plans to drop the vaccine mandate. According to The Associated Press, Transport Canada said the existing rules for masks which have been required...
MLB・35 MINUTES AGO

Shopee, the Amazon of Southeast Asia, has been on a layoff spree within a year of raising $6 billion. We dug into the financials for an inside look.

On September 19, Singapore-based ecommerce giant Shopee announced its latest round of layoffs. Shopee is pivoting from a growth mindset to cutting costs as external funding dries up. It's one of many tech giants downsizing as Fed rate hikes push investors to safe-heaven investments. As employees trickled into the offices...
BUSINESS・15 HOURS AGO
Business Insider

Microsoft's former VP of HR told Insider the three types of employees who are most likely to be let go during hard times — and who's safest.
SOFTWARE・14 HOURS AGO
Business Insider

How Peloton went from a pandemic-era success story worth $50 billion to laying off more than 4,000 workers and losing 4 top execs in a month

Peloton was at the top of the connected-fitness food chain during the pandemic, but its business took a hit when the world began to reopen.
BUSINESS・9 HOURS AGO
Business Insider

Some virtual workers are moving to another country without telling their bosses or coworkers. They're taking elaborate measures to conceal their locations, according to Vice and Fortune reports. One virtual worker who's secretly moving to Mexico told Insider it's worth the risk of being fired. Some employees are working virtually...
INTERNET・1 DAY AGO
Business Insider

A CIA doctor dispatched to investigate the so-called Havana syndrome opened up about his own illness. The anonymous doctor told CNN he started experiencing symptoms of the syndrome himself while in Cuba. Experts aren't sure what causes the syndrome, but the leading theory involves electromagnetic waves. A doctor has opened...
PUBLIC HEALTH・14 HOURS AGO
Business Insider

An airport truck driver says she has to fill in as cabin cleaner and gets 7 minutes to clean a plane. It shows how a crippling staff shortage is taking its toll on US airport workers.

A cabin cleaner at Logan airport said it can take 45 minutes to clean a plane, but airlines sometimes ask his team to finish the job in 10 minutes.
ECONOMY・1 DAY AGO