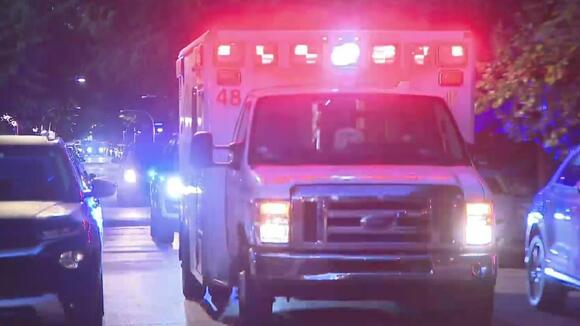 CHICAGO (CBS)-- Police said a baby taken during a home invasion in Irving Park Tuesday night has been returned.

The Chicago Fire Department said the 8-month-old girl was taken to Swedish Hospital where her condition was stabilized Wednesday morning. The child was left on the porch and a neighbor located her.

Just after 10 p.m., police said a 17-year-old girl was home, in the 3800 block of North Richmond Street, when a man kicked in the door and demanded she put an 8-month-old baby in a car seat.

The teen told police the man hit her in the head and drove away from the scene with the baby.

Police said this is incident is "domestic related."

AURORA, Ill. (CBS) -- One person is dead and another is in critical condition after a shooting in Aurora Saturday afternoon, police say. Just after 2 p.m. police responded to a 911 call after two 29-year-old men were found shot in the 300 block of Center Avenue, according to the Aurora Police Department. Both were in critical condition, but one of the victims was pronounced dead at the scene. The other victim was transported to a local hospital and then airlifted to a Chicago trauma center. Around 4:45 p.m. police confirmed that one of the victims had died and the case is now being investigated as a homicide. The victims' identities are still being witheld, police said Saturday. Anyone with information on the incident is asked to contact detectives at (630) 256-5500 or email tips@aurora.il.us. Information can also be reported anonymously to CrimeStoppers at (630) 892-1000.
AURORA, IL・9 HOURS AGO
CBS Chicago

CHICAGO (CBS) – A woman is dead and three other people are critically injured following a crash on DuSable Lake Shore Drive overnight. Police said around 1:15 a.m., officers responded to a crash, in the 5300 block of South Lake Shore Drive, involving a Toyota Corolla and a Kia Forte. A 35-year-old female woman, who has since been identified as Whitley McMiller of South Holland, was riding in the Toyota and was transported to the University of Chicago Hospital by the Chicago Fire Department where she was pronounced dead. A 64-year-old woman was also transported to U of C in critical condition. A 69-year-old woman and a 30-year-old man were taken to Northwestern Hospital also in critical condition, according to fire officials. The cause of the crash is still under investigation. No further information was immediately available.
CHICAGO, IL・17 HOURS AGO
CBS Chicago

CHICAGO (CBS) – One man is dead and another is critically wounded after a shooting in Rogers Park Saturday morning. The shooting happened in the 7100 block of North Clark Street around 1:26 a.m. Police say the victims were standing in a parking lot when shots were fired from a group of people. A 37-year-old man was dropped off at St. Francis Hospital with gunshot wounds to the chest and was pronounced dead.  A 36-year-old man was also dropped off at St. Francis in critical condition with gunshot wounds to the abdomen and back. No one is in custody. Area Three detectives are investigating.
CHICAGO, IL・18 HOURS AGO
CBS Chicago

CHICAGO (CBS)-- A rideshare passenger was shot in West Garfield Park Thursday night.Police said a 23-year-old man was sitting in the back seat of a rideshare vehicle when shots were fired into the car from a dark colored SUV. Shots were fired in the 4400 block of West Lake Street just after 10 p.m.The man was taken to Stroger Hospital with gunshot wounds to his back and right arm. No one else was injured. No arrests have been made.
CHICAGO, IL・1 DAY AGO

'Now they're without a father and a mother and brother and sister': Uncle caring for surviving children in deadly Oak Forest shooting

OAK FOREST, Ill. (CBS) -- After a mother and her two children were shot and killed outside their family home in Oak Forest, their uncle is stepping up to take care of the mother's two surviving children. CBS 2's Jackie Kostek spoke with the man whose sister was killed Friday, and he said the only thing stronger than his sadness is his shock. Nick Navarez is the younger brother of Lupe Gomez, who was a mother of four. When she and two of her children were shot and killed outside their home, Navarez got a call from one of his nieces saying she...
OAK FOREST, IL・8 HOURS AGO
CBS Chicago

CHICAGO (CBS) -- The suspect who was arrested and charged in the carjacking and brutal beating of a chef in Chinatown has been denied bond.On Friday, the family confirmed a suspect was in custody more than five months after the attack. At a news conference Friday evening, Chicago Police Chief of Detectives Brendan Deenihan said Termaine Patterson, 18, had been charged with multiple counts – including attempted murder, aggravated battery to a victim who is 60 or older, robbery, and aggravated vehicular hijacking.A juvenile was also charged with possession of a stolen motor vehicle. The juvenile was spotted in Lew's car...
CHICAGO, IL・12 HOURS AGO
CBS Chicago

CHICAGO (CBS)-- A 25-year-old woman was seriously injured in a shooting near the Illinois Medical District early Friday morning. Police said the woman was walking on the sidewalk, 2300 block of West Roosevelt Road just before 2 a.m., when a man fired shots. The woman was shot in the leg and took herself to a local hospital where she is in serious condition. No arrests have been made.
CHICAGO, IL・1 DAY AGO
CBS Chicago

CHICAGO (CBS)-- Joseph Kromelis, known to many in Chicago as "Walking Man," has been released from Stroger Hospital nearly four months after he was set on fire in River North in May.Cook County health officials confirmed he will continue to recover at a rehab facility.  "He expects to undergo additional surgeries as part of his recovery," Officials said in a written release. "He is grateful for everyone's concern and asks that his privacy be respected."Kromelis had been in critical condition and had not been expected to survive after the attack. His condition continued to be upgraded over the last four months. Joseph...
CHICAGO, IL・1 DAY AGO

CHICAGO (CBS) -- Imagine riding in the back of a rideshare and someone opens fire, leaving the car riddled with a dozen bullet holes.CBS 2's Asal Rezaei reports from an industrial part of Lake Street in West Garfield Park where it's bit deserted with big empty warehouses.Video from the crime scene is pretty shocking, There's at least three bullet holes in the front windshield of that gray Nissan. The front passenger window was also shot out and there's at least 15 bullet holes in the passenger side of the car.The shooting happened just after 10:00 Thursday night in the 4400...
CHICAGO, IL・1 DAY AGO
CBS Chicago

CHICAGO (CBS) --  The man seriously injured in a building explosion in the South Austin neighborhood earlier this week has died, according to Chicago fire officials. The victim was identified as 29-year-old Shabron Robinson by the Cook County Medical Examiner's Office. Robinson worked as a U.S. postal worker, according to Mack Julion, the president of the National Association of Letter Carriers.Julion described Robinson in a statement as having "a very spirited personality and was well liked by all who knew him. He will be greatly missed."Seven others were also rushed to area hospitals - two of them were left in critical condition....
CHICAGO, IL・1 DAY AGO
CBS Chicago

CHICAGO (CBS)-- Oak Forest residents have been advised to shelter in place amid a barricade situation. According to city officials, a person is barricaded in the 5500 block of Ann Marie Lane. Chopper 2 is over the scene where SWAT teams and fire crews are working to clear the scene. Heavy smoke is coming from a house. This is a developing story.
OAK FOREST, IL・1 DAY AGO
CBS Chicago

CHICGAO (CBS)-- One man died and another was injured after a crash involving a motorcycle in Aurora Thursday night. Police said a motorcyclist was traveling westbound on Sunset Avenue when it collided with a pickup truck driving southbound on Wilder Street. The Aurora Fire Department responded to the scene and found two people injured. One man was flown by medical helicopter to a Chicago-area trauma hospital where he died. He has been identified as 23-year-old Jackson Bennett. A second man suffered non-life threatening injuries. It is not clear which victim was riding the motorcycle involved in the crash. The crash is under investigation.
AURORA, IL・1 DAY AGO

CHICAGO (CBS) -- Chicago police are investigating a shooting at 16th and Trumbull in the North Lawndale neighborhood.It happened several blocks from Douglass Park. CPD and medics responded to the scene. It's unclear how badly the people were injured.
CHICAGO, IL・1 DAY AGO
CBS Chicago

CHICAGO (CBS) -- A woman was rushed to the hospital from the scene of a fire in the Southwest Side's Ashburn neighborhood Friday afternoon.The fire broke out in a two-story apartment building at 3340 W. 79th St. The Fire Department called a still-and-box alarm for the necessary equipment and manpower.A 61-year-old woman was rushed to Advocate Christ Medical Center in Oak Lawn in very critical condition, the Fire Department said.Piles and piles of bags, plastic chairs, tables, and other items were pulled out of the home. They covered more than four different sections of lawn on either side of the building.The Fire Department said they would be on the scene for some time late Friday, as there was a lot of debris due to hoarding.
CHICAGO, IL・1 DAY AGO
CBS Chicago

CHICAGO (CBS) -- A teen is due in court to face weapons charges from his arrest in July in Oak Lawn.Video of the arrest shows Oak Lawn police officers beating 17-year-old Hadi Abuatelah after he ran away from a traffic stop.Oak Lawn police say they found a gun in a bag he was carrying.Abutaleh has serious injuries and still needs a walker to move around.Community groups want the state's attorney's office to drop charges against the teen and want charges filed against the oak lawn officers seen beating him in the video.
OAK LAWN, IL・2 DAYS AGO
CBS Chicago

CHICAGO (CBS) -- There was a solemn celebration in Pilsen Saturday as friends, family and neighbors gathered to celebraten the birthday of Kierra Coles, who disappeared nearly four years ago and has not been seen since. By most conventions it was a standard birthday party. There were balloons, cake, dancing, friends and family. But the guest of honor was missing. "I still wanna do something so people could know that I'm not going to stop fighting for my daughter for me to get either justice or for her to come home. I'm not going to stop fighting," said Karen Phillips. On her daughter's 30th...
CHICAGO, IL・3 HOURS AGO
CBS Chicago

CHICAGO (CBS) -- Three people were injured late Wednesday in a violent crash in the Auburn Gresham neighborhood.The crash occurred late Wednesday afternoon at the intersection of 86th and Carpenter streets – in the middle of a quiet residential neighborhood.Police said a Chevrolet Trailblazer was headed south on Carpenter Street and hit a Chevrolet Equinox head-on. CBS 2's Kris Habermehl reported the cars slammed together at high speed. The Equinox smashed into a light pole and left bent and smashed – with the streetlight arm ripped asunder and a one-way sign lying on the parkway. The car ended up resting against a house...
CHICAGO, IL・3 DAYS AGO
CBS Chicago

CHICAGO (CBS) -- A former Waukegan police officer has been charged with murder in the shooting death of a man during a 2020 police chase, and is also facing charges for using excessive force while arresting a man at a family baptism in 2019.Dante Salinas has been charged with three counts of second-degree murder and one count of involuntary manslaughter in the Oct. 20, 2020, shooting death of Marcellis Stinnette death, according to Lake County State's Attorney Eric Rinehart.Salinas shot and killed Stinnette and wounded his girlfriend, Tafara Williams, on Oct. 20, 2020, during a chase after they'd fled an earlier...
WAUKEGAN, IL・2 DAYS AGO