8-month-old girl found after being taken by suspect who broke into Irving Park home: CPD 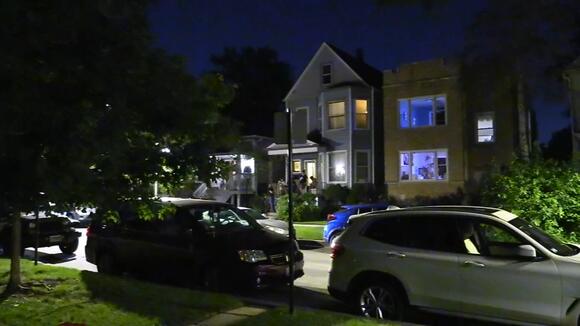 A male suspect kicked in a door in the Irving Park neighborhood and took an 8-month-old baby girl Tuesday night, Chicago police said. This all unfolded just before 9:40 p.m. in the 3800-block of North Richmond Avenue, according to CPD. Video from the scene earlier Wednesday morning shows police officers investigating the scene. Police said the suspect was a "known male," and demanded that a 17-year-old girl place that baby girl in a car seat. RELATED: Missing California girl last seen at campground party may have been abducted: sheriff's office CPD said that's when the male suspect struck that 17-year-old on the head before taking the baby. Despite being hit, police said the 17-year-old refused EMS treatment on the scene. CPD said the incident is domestic-related. It was not immediately clear how the 17-year-old is related to the male suspect, if he's armed and if he's related to the baby. CPD said the child was returned to the location where the incident originally took place just after 6 a.m. and was found by a neighbor. The baby appears to be unharmed, but was taken to Swedish Hospital as a precaution, Chicago police said. Area Five detectives are investigating.

He found himself a million dollar baby in an Irving Park home. But he couldn't afford the 17 year old girl to care for the 8 month old infant. So he did the right thing and returned the cutie-pie by dawn. Good Move.

The teen was fleeing police in a stolen car when he ran a red light, killing a 55-year-old woman on her way to work, Chicago police said.
CHICAGO, IL・3 HOURS AGO
ABC 7 Chicago

A man is charged for a violent armed robbery on a CTA Red Line train that was captured on horrific video.
CHICAGO, IL・14 HOURS AGO
ABC 7 Chicago

The suspects, driving a stolen car, stole two more vehicles in McKinley Park and Heart of Chicago, according to police.
CHICAGO, IL・1 DAY AGO
ABC 7 Chicago

The 54-year-old was found Friday morning, according to officials.
CHICAGO, IL・9 HOURS AGO

There are road closures in place due to the police activity.
CHICAGO, IL・1 DAY AGO
ABC 7 Chicago

A man was arrested under a pool deck of a home after police said he led them on a chose through multiple towns in Northwest Indiana Wednesday night.
GARY, IN・1 DAY AGO
ABC 7 Chicago

A man driving a car on the South Side was killed in a drive-by shooting Tuesday night, Chicago police said.
CHICAGO, IL・2 DAYS AGO

The badly mangled vehicles involved were scattered across four lanes of Ogden Avenue in varying states of extreme damage after the incident.
WESTERN SPRINGS, IL・2 HOURS AGO
ABC 7 Chicago

Intruder who wore bulletproof vest, threatened CPD officers with their own guns being held on bond

Police say the 47-year-old man got inside CPD's Homan Square facility from a fire escape, and allegedly picked up multiple weapons before being shot by police.
CHICAGO, IL・2 DAYS AGO

Joliet police said a 2-year-old boy is in critical condition after finding an unsecured gun and shooting himself in the head.
JOLIET, IL・3 DAYS AGO
ABC 7 Chicago

Chicago police are warning auto repair businesses on the Northwest Side that thieves are targeting vehicles in their shops.
CHICAGO, IL・2 DAYS AGO
ABC 7 Chicago

Gaige Grosskreutz has called for an investigation by the Milwaukee County Clerk of Circuit Court on how the sealed petition was leaked to a conservative news outlet this week.
KENOSHA, WI・4 HOURS AGO
ABC 7 Chicago

The woman inside claimed she was the victim of a scam, and that she signed a lease and paid someone thousands up front to live there.
CHICAGO, IL・1 DAY AGO
ABC 7 Chicago

The suit, which seeks class-action status, names six Alden facilities: three in Chicago and one each in Cicero, Harvey and McHenry.
CICERO, IL・2 DAYS AGO