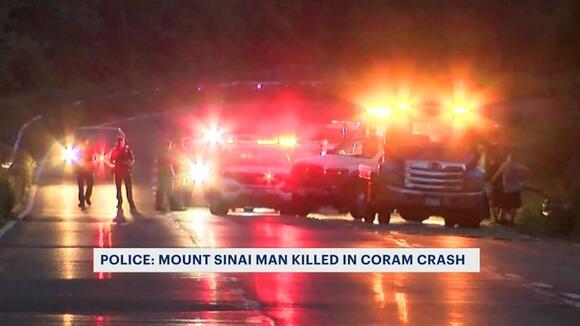 Police say a man has been killed in a crash in Coram.

According to police, the incident happened on County Road 83 just south of Mooney Pond Road.

Police say 83-year-old Preston Pavlo was heading south when he hit the back of an empty tow truck.

The truck was parked in the left lane, removing a vehicle from the scene of a previous crash.

Pavlo was pronounced dead at the scene.

Anyone who may have seen the crash is asked to call police.

Suffolk detectives say on Feb. 4, the man went into TD Bank on Jericho Turnpike and demanded the teller put cash in a small black leather organizer.
ELWOOD, NY・12 HOURS AGO

The NYPD says a woman was critically injured in a hit-and-run crash overnight in Brooklyn.
BROOKLYN, NY・8 HOURS AGO
News 12

They say Brian Keating was driving near West 120th Street when he had a medical episode. The 66-year-old struck the center guide rail, crossed three lanes and then left the roadway.
WHITE PLAINS, NY・2 DAYS AGO
News 12

Police say an Amityville man has been arrested for DWI following a crash that seriously injured his passenger in Islip early this morning. According to police, Tevin Allen was driving a 2018 Nissan on eastbound Sunrise Highway when he lost control of the vehicle, which struck the median west of Commack Road, at 1:17 a.m.
ISLIP, NY・2 DAYS AGO
News 12

Among the injuries are a brain bleed, fractured ribs and lacerated liver.
ANSONIA, CT・1 DAY AGO

Police are searching for two suspects who robbed a man at gunpoint in Queens Friday night.
QUEENS, NY・11 HOURS AGO
News 12

An 11-year-old boy is in critical condition after he was hit by a car while riding an electric scooter in Bensonhurst Wednesday night.
BROOKLYN, NY・2 DAYS AGO

A Queens man was found fatally stabbed inside a Brooklyn apartment building Wednesday night, according to the NYPD.
BROOKLYN, NY・2 DAYS AGO
News 12

Police: Man seen in Huntington Station with what appeared to be gun

A man was spotted on a street in Huntington Station with what appeared to be a gun.
SUFFOLK COUNTY, NY・2 DAYS AGO
News 12

The driver of a car that caught on fire in Rockland County Thursday managed to escape unharmed, police say.
ROCKLAND COUNTY, NY・2 DAYS AGO
News 12

A New Hyde Park man charged with seriously injuring a Nassau County police officer has admitted to driving under the influence of drugs and alcohol.
NASSAU COUNTY, NY・2 DAYS AGO
News 12

An employee at the Guide Dog Foundation in Smithtown was arrested after a dog was found dead in one of their company vans.
SUFFOLK COUNTY, NY・20 HOURS AGO
News 12

‘He always put others first.’ Cab driver who was fatally beaten remembered at funeral service

The ceremony was emotional for Gyimah’s loved ones and four young children who are still in disbelief that their father is gone.
BRONX, NY・1 DAY AGO
News 12

Southington police are searching for information on 18 smash-and-grab car burglaries around the town.
SOUTHINGTON, CT・11 HOURS AGO
News 12

Milford police are looking for two suspects who they say broke into several businesses early Friday morning on or near Boston Post Road. One of those businesses gave News 12 Connecticut surveillance video showing the whole thing at 5:59 a.m. Friday. "They smashed the door, they went inside. There was...
MILFORD, CT・1 DAY AGO