At least 1 person hospitalized after shooting in Dayton 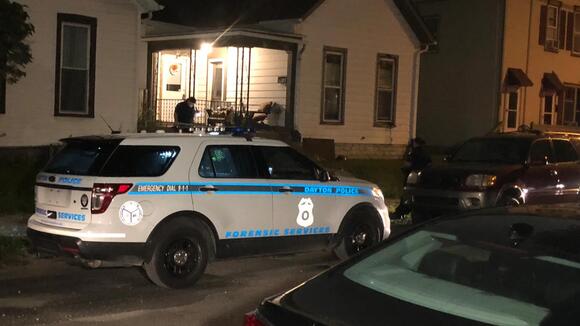 DAYTON — At least one person was hospitalized after being shot in Dayton early Wednesday morning, according to the Montgomery County Sheriff’s Office.

>>Lawrence PD: ‘We are extremely proud of our officers’ work;’ Butler Twp. shooting suspect in custody

Crews responded to the 100 block of Perrine Street around 3:13 a.m. on report of a shooting, dispatchers tell News Center 7.

At least one person, a female, has been taken to Miami Valley Hospital with injuries.

Their condition is not known and the shooting remains under investigation, dispatchers say.

We will update this story when we learn more.

TROTWOOD — Trotwood Police are investigating a deadly crash that took place over the weekend. A crash involving a motorcycle was reported Saturday, Oct. 1, just after 9:20 p.m. on Wolf Creek Pike near Olive Road. The motorcyclist died on scene, according to a release from police. The cars...
TROTWOOD, OH・18 HOURS AGO
WHIO Dayton

FAIRFIELD, Ohio — An 18-year-old man is dead after a shooting at a Butler County hotel, our news partners at WCPO reported. Police responded to the report of a shooting at the Holiday Inn Express on Fairfield Business Center Drive around 5:30 a.m. Sunday, WCPO reported. When they arrived,...
BUTLER COUNTY, OH・20 HOURS AGO
WHIO Dayton

DAYTON — Fire crews remain on scene after putting out a mulch fire at a landfill in Dayton, according to the Montgomery County Sheriff’s Office. NewsCenter 7′s Kayla McDermott is on scene and reports that the fire is now out. Crews were dispatched to the 2600 block...
DAYTON, OH・6 HOURS AGO
WHIO Dayton

4 taken to hospital after crash in Bethel Township

MIAMI COUNTY — Four people were taken to the hospital after a two-vehicle crash in Bethel Township Wednesday afternoon. Emergency crews were called to respond to the crash in the area of U.S 40 between SR 201 and 202 around 1:45 p.m., according to initial reports. Bethel Township Fire...
MIAMI COUNTY, OH・18 HOURS AGO

Crews responds to a barn fire in Miami County

DAYTON — A Dayton mother who believes she knows who hit and injured her son in late September is upset that police have not detained or arrested anyone. Robin Tucker is not sure how her son Kyle was injured, but she thinks the suspect who hit and dragged him several blocks Sept. 22 is the same person recorded on her security camera peeping at their home.
DAYTON, OH・1 DAY AGO
WHIO Dayton

FAYETTE COUNTY — The Wilmington Post of the Ohio State Highway Patrol is investigating a two-vehicle crash that involved one fatality, according to a news release. >>RELATED: 4 taken to hospital after crash in Bethel Township. The accident happened Wednesday afternoon at around 4:36 p.m. Christopher Stinespring, 48 from...
FAYETTE COUNTY, OH・8 HOURS AGO
WHIO Dayton

TROTWOOD — Trotwood police are investigating a “suspicious death” after a 61-year-old man was found dead Thursday. Police found the man near the 6500 block of Midway Avenue around 3:30 p.m., according to a spokesperson for the police department. The man, later identified as John Mullins, was...
TROTWOOD, OH・1 DAY AGO

KETTERING — A Dayton man is facing charges after police say he set a fire at a local gas station. Dale Smith, 21, was indicted by a Montgomery County grand jury Wednesday on one count of arson, aggravated arson, possession of criminal tools and two counts of vandalism, according to court records.
KETTERING, OH・17 HOURS AGO
WHIO Dayton

DARKE COUNTY — Crews were called to battle a fire that broke out in a mobile home Wednesday in Ansonia. Darke County dispatch confirmed crews responded to the fire in the 200 block of Covington Street. The fire was reported around 11:20 a.m., according to initial reports. Dispatch confirmed...
DARKE COUNTY, OH・21 HOURS AGO
WHIO Dayton

HARRISON TWP. — UPDATE @ 7:40 p.m.:. Two girls, ages 5 and 8, were reportedly in stable condition from non-life threatening injuries after they were struck by a van Tuesday afternoon in Harrison Twp. after a school bus had dropped them off, Montgomery County Sheriff’s Capt. Andy Flagg said.
MONTGOMERY COUNTY, OH・1 DAY AGO

DAYTON — The City of Dayton said it will not sign a new contract with ShotSpotter. The technology is used to help police pin-point where there is gunfire in parts of the city. The city said several reasons led to this decision. Because of changing state laws, it is...
DAYTON, OH・1 DAY AGO
WHIO Dayton

2 children flown, 1 other driven to hospital after crash on SR 734 in Jamestown

JAMESTOWN — UPDATE: October 4 @ 8:30 a.m. Three people, including two children, were taken to the hospital after a crash is Jamestown Monday. Fire and rescue crews responded to the scene of a reported vehicle crash with entrapment in the 6900 block of state Route 734. The crash was reported about 4:30 p.m. as a vehicle that hit a tree.
JAMESTOWN, OH・2 DAYS AGO
WHIO Dayton

UPDATE: 4 seriously injured in crash on I-70; OSP Springfield Post to investigate

CLARK COUNTY — The Ohio State Highway Patrol (OSP) is investigating a two-vehicle, injury crash that shut down eastbound I-70 on Sunday morning at 3:27 a.m. according to the OSP spokesperson. Springfield resident, Melecio Herrera-Guzman, age 40, was operating a 2008 Chrysler, heading westbound on I-70 in the eastbound...
SPRINGFIELD, OH・2 DAYS AGO
WHIO Dayton

DAYTON — Police are investigating after reports of an armed robbery at a gas station in Dayton Monday. Crews were called to the Shell in the 1900 block of Stanley Avenue just before midnight. A man dressed in all black walked into to the gas station, put a gun...
DAYTON, OH・2 DAYS AGO
WHIO Dayton

DAYTON — The United States Postal Inspection Service is asking for the public’s help, and offering a reward, for information in the case of a postal worker who was robbed at gunpoint in Dayton last month. The robbery happened Sept. 22 on Melbourne Avenue near North Gettysburg Avenue....
DAYTON, OH・2 DAYS AGO
WHIO Dayton

An Ohio man was sentenced to 37 months in federal prison for illegally possessing a pistol converted into an automatic weapon using a 3D printer that he later used in self-defense outside an IHOP restaurant. Gionni Dews, 23, of Cincinnati, was sentenced on Tuesday, according to a news release from...
CINCINNATI, OH・11 HOURS AGO