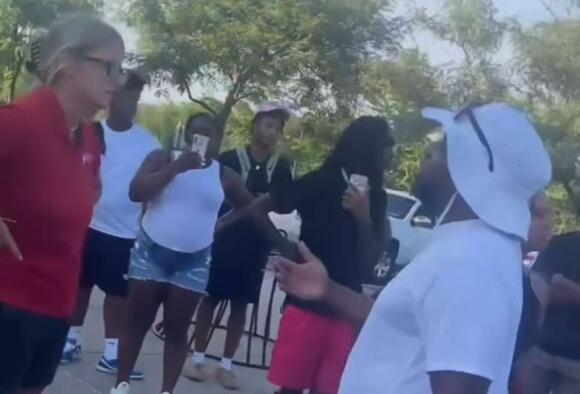 A water park outside Kansas city is under fire for racial discrimination after abruptly cancelling a Black teen’s birthday party as guests began to arrive.

Chris Evans, who organised the party for 17-year-old Isaiah Evans, said he had signed a $1,900 contract to reserve the Summit Waves Aquatic Facility in suburban Lee’s Summit city and host up to 250 guests at the party on Saturday. But when guests began showing up at the park, they were denied access to the facility.

Mr Evans said while he and his wife were en route to the park to join the festivities, he recieved a message from a park official saying “this event doesn’t represent Lee’s Summit Waves and that my reservation was cancelled because she was uncomfortable”.

By the time Mr Evans and his wife reached the park, police officers were on the scene to assist park officials in barring party attendees from entering the facility. Part of the confrontation between guests and security officials was captured in a video that went viral on TikTok, collecting at least 1.7 million views.

Kansas City youth denied access to summit waves a water park in Lee Summit, Missouri due to their skin color. Yesterday a youth age private party was canceled on his birthday because summit waves owner said she “ didn’t feel comfortable “. She proceeded and told the group “ that they didn’t represent summit waves”. She told the group that she’d refund them their money and proceeded to shut the pool down. However guards have been caught making racist slurs on Snapchat towards the group since being outed. #racism #sadstory

Mr Evans, in subsequent comments, made clear that he felt the party was cancelled because of racism from the park’s management.

“We believe that racial prejudice in our society should be identified and called out so that it might reduce the chance of repeat occurrences,” Mr Evans said in quotes published by the Kansas City Star .

Lee’s Summit city officials on Monday defended the park’s decision to cancel the party, arguing that 500 teenagers had showed up for the party after it was advertised on social media and that certain social media posts made park officials concerned about ensuring the “safety of party guests”.

But Mr Evans hit back at the assertion that there were 500 people gathered for the party, and Lee’s Summit mayor William Baird was similarly unimpressed.

Mr Baird also criticised comments made by staff officials at the water park defending the cancellation of the event.

“The comments were appalling and not condoned by Parks and Recreation, and are inconsistent with the culture I know the City of Lee’s Summit strives to reflect,” Mr Baird said.

The city plans to fully refund the family for the cost of the party, but Mr Evans said the indignity it suffered on Saturday will remain.

“My kids were heartbroken that the party was canceled,” he said. “They are good kids who make good grades, have bright futures and do not deserve to be treated like this. And that goes for all the kids at the park that day.”

Enough of the race card. This is getting to old. Who cares if people don't like your color of your skin. Move on. I am black and I don't give a flying *%#$ what they think about me because of my skin color.

There should have been a guest list at the gate. If your name is not on the list charge full price or turn them around. ID must be shown.

When Karla Rodriguez vanished from her Las Vegas neighborhood in 1999, investigators called her a “victim waiting to happen.” Not only was she a vulnerable 7-year-old with a medical condition who spoke limited English, but Karla’s parents often left her unsupervised, to fend for herself.
LAS VEGAS, NV・1 DAY AGO
USA TODAY

Katharine McClain said her husband John McClain found the baby in a shed at their home and wrapped her in a towel before an ambulance arrived.
LIVINGSTON, TX・1 DAY AGO
The Independent

A boat captain in Florida has been accused of negligence for failing to prevent a Memorial Day parasailing accident that killed a woman and injured two children.Daniel Gavin Couch, 49, was charged with manslaughter and breaches of commercial parasailing laws for his alleged role in the death of Supraja Alaparthi and the injury of her son and nephew in May.Alaparthi, 33, from Elk Grove Village, Illinois, was killed when her parasail crashed into the Old Seven Mile Bridge just west of Marathon in the Florida Keys after Mr Couch cut the line that tethered her to his boat.The crash happened...
ACCIDENTS・1 DAY AGO
The Independent

The first time Jan Broberg was kidnapped as a child, her parents and investigators in their tight-knit, conservative Idaho community barely knew how to define a pedophile. In the 1970s, FBI agents were out of their depth when it came to child molestation, according to one of the men on the case.When it happened again two years later, the pitfalls of naivete and excessive trust became apparent. Jan was kidnapped by the same expert groomer, the same man who had insidiously infiltrated the Brobergs’ lives, twice.“They were perfect childhood years, until the day I woke up in the back...
IDAHO STATE・9 HOURS AGO

Police in Chicago say officers shot a suspect who scaled five stories on a fire escape to break into an evidence storage facility during a SWAT training exercise on Monday. Initial reports stated that two people had been injured after several shots were fired inside the Homan Square police facility in the city’s west just before midday.At a press conference on Monday afternoon, Chicago Police superintendent David Brown said an offender had approached the building and told an officer he was trying to retrieve personal property. Ignoring the warnings from police, the suspect then climbed a fire escape to...
CHICAGO, IL・1 DAY AGO
The Independent

A lightning accident on a Florida lake that killed one student has claimed another teen’s life after it was announced that a second child succumbed to his injuries, bringing the death toll from the tragic accident to two.“It is with broken hearts that we share the passing of a second rower involved in last Thursday’s weather-related tragedy,” North Orlando Rowing wrote in a Facebook post on Saturday. “The NOR community is devastated and continues to focus on supporting our affected families and our entire NOR team during this difficult time. We continue to cooperate with local authorities and USRowing...
ORLANDO, FL・1 DAY AGO