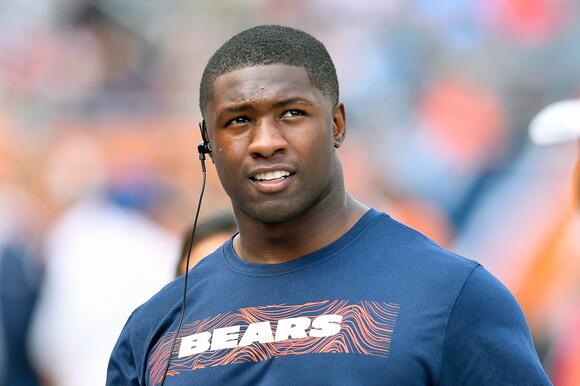 Tuesday Morning Roquan Smith took to social media to let the world know that he had officially requested a trade. The Chicago Bears linebacker revealed in the post that the Bears new Front Office has “refused to negotiate in good faith” and that the new regime doesn’t “value” him.

Now, Bears General Manager, Ryan Poles, did comment later and said that “Right now, my intentions are to make sure Roquan is on this team.” In his post Roquan Smith did say “I haven’t had the chance to talk to the McCaskey family, and maybe they can salvage this, but as of right now I don’t see a path back to the organization I truly love.” Right now it seems like Roquan is ready to move on, and Tuesday night on The Jon Chuckery Show Jon explained why the Atlanta Falcons need to bring Roquan home.

1.) Roquan Smith is a Georgia Boy
Roquan Smith coming to the Atlanta Falcons makes so much sense for a few different reasons. The first reason is pretty obvious, Roquan grew up in Georgia. As you read in the tweet above Roquan Smith is from Macon County, Georgia, attended Macon County High School, and was a first round draft pick out of the University of Georgia. The former Georgia Bulldog talked about being a “Homegrown Bear” well he would definitely be a Homegrown Falcon too. Roquan Smith being able to play in front of family, Atlanta Falcons, and Georgia Bulldogs fans shouldn’t be overlooked, as he would definitely feel loved and valued playing in front of a true home crowd.

2.) Ryan Pace
Speaking of feeling valued, I don’t think anyone would have a hard time believing Roquan Smith would feel valued in Atlanta considering the man that drafted Smith, Ryan Pace, is now the Senior Personnel Executive for the Atlanta Falcons. The Chicago Bears ex-General Manager has already brought in a few of his former Bears players, and I'm sure having him in the front office does nothing but give the Falcons an advantage when it comes to trying to trade for the four-year veteran, and that is the other reason why the Falcons trading for Roquan Smith makes so much sense.

4.) He’s a perfect fit in Dean Pees’ defense
Lastly, and most importantly Roquan Smith would be a perfect fit for the Falcons on the field as well. Now, any team would fit in and make room for a second team All-Pro linebacker, but it would be a seamless fit for the Falcons. Under Dean Pees the Falcons are going to be a three-four defense, which Smith has played in his entire career, the strong physical linebacker is just what Pees is looking for in an inside linebacker, and we all know the Falcons can use all the talent they can get on offense and defense and Roquan Smith would be a huge boost for a defense that ranked 28th overall in 2021.

Jon Chuckery sees no reason why the Falcons shouldn’t trade for Roquan Smith saying “Why not?” Jon also says “Go get him, go get a trade package together and bring him here.” Jon believes Roquan would slide into the Falcons’ defense perfectly as well saying “plays a position of need and you slot him right in.”

Sometimes there are downsides to bringing a guy in via trade, but in this instance there are no down sides to the Atlanta Falcons trading for Roquan Smith. Even if you have to give the Chicago Bears a future first round pick that is okay because you are getting an established player that is young and will be a part of your future going forward. Jon Chuckery shared the same sentiments saying “Would I rather give up a first round pick and have a player that I know what he is? Yea I’d rather give up a first round pick, i’ll do that if that’s what it takes to get Roquan Smith, because I need playmakers on my defense. See i’ve got a better idea of what he is than everybody else that we draft nowadays.”

Roquan Smith would be a perfect fit in Atlanta with the Falcons, and I think that is easy to see. Now, all that remains to be seen if Terry Fontenot, Ryan Pace, and the Atlanta Falcons front office can make it happen. I think all Atlanta Falcons fans agree when Jon Chuckery says “Bring Roquan Smith back home.”

Are the Falcons already exceeding expectations

Jon Chuckery and NFL writer, Eric Edholm, discuss the Atlanta Falcons and whether or not the team has already exceeded expectations and are a better team than most think.
ATLANTA, GA・13 HOURS AGO
Yardbarker

It was reported Monday that Indianapolis Colts All-Pro running back Jonathan Taylor had " a chance" to suit up for the team's Week 5 "Thursday Night Football" contest against the Denver Broncos, despite having suffered a sprained ankle the day before. On Wednesday, the team announced that they won't end...
INDIANAPOLIS, IN・24 MINUTES AGO
92.9 The Game

Andy & Randy were joined by 92.9 The Game Atlanta Braves insider Grant McAuley who talked about if tonight’s game against the Miami Marlins will be Jake Odorizzi’s final outing in a Braves uniform.
MLB・1 DAY AGO
92.9 The Game

Andy & Randy talked about the Georgia Bulldogs struggles the last few weeks and specifically some of the play and mistakes made in the 26-22 win over the Missouri Tigers on Saturday night
ATHENS, GA・2 DAYS AGO

After a three year absence, talks are being held for the Georgia High School football championships to make a potential return to the Mercedes-Benz Stadium.
HIGH SCHOOL・23 HOURS AGO
92.9 The Game

For the Atlanta Hawks, winning starts in the Middle East

Atlanta Hawks GM Landry Fields chats about the two games the Hawks are playing in Abu Dhabi and what they hope to learn about the team while facing the Bucks.
ATLANTA, GA・6 HOURS AGO