By Jaclyn Lee via
6abc Action News
2022-08-10
It has been a devastating few days for Kathi Camp. Her 26-year-old son, Diniar Camp, was shot and killed Saturday morning just before 12:30 a.m. at 19th and Berks streets in Philadelphia. Friends and family gathered on Tuesday night for a vigil and a balloon release. "Stop the violence!" said Kathi Camp. "I believe they targeted my baby. They targeted him and it's not fair because he would have loved you. He would have gave his heart to you." Diniar's family said he moved to Las Vegas to escape Philadelphia's violence, and the only reason he was in town was to go to his friend's funeral. That friend was 26-year-old Joelill Foy, the founding member of the singing group "Brotherly Love," who was gunned down outside his home on the 1800 block of Sigel Street two weeks ago . "He went away to pursue his music career. He only came here to bury his friend and now he's leaving on a toe tag," said Diniar's aunt, Geraldine Camp. "I wish he never would have ever even came here." 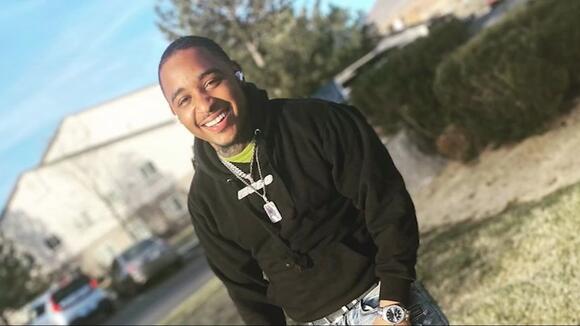 "What happened to him is just really sad," added Diniar's wife, Arryanna Camp. "I just can't even imagine this happening to anybody, but for it to happen to me, I'm only 22, he was only 26." Camp's family described him as someone who would give you the shirt off his back and help others solve problems. "My son was not a street person. He was loved by very many people," said Kathi Camp. "He was into music and dedicated his life to helping people, and talking to people and making them smile." As Philadelphia police continue to search for the suspect, the family wants to know why the shooter pulled the trigger. "He went away to get his singing career. You know he got married. He wants kids. Y'all took all of that away from us," said Geraldine Camp. "Y'all hit my family hard when you did this." Philadelphia police say they believe a domestic dispute was the motive for this killing, but no further details were available. Police say the investigation is active and ongoing with homicide detectives. Members of Diniar's family say they plan on leaving the city.

I’m in no way down playing this senseless act. But the wife said the murder was over a domestic dispute. If that’s the case this “family member” would have targeted him. Visiting from LA, his killer found it easier to get to him because they probably didn’t have the means to get to LA to do it. Yes Philly is a violent city, but they can’t put this act of violence on the City. This was planned and orchestrated from a family member not a stranger. I would recommend anyone who can afford to move out of the city, do it!

This sound like it was a planned to target shooting they knew he would be coming because someone told about his coming to Philadelphia, Yes I believe a family member help with his killing by telling that he was in Killphiladelphia for his friend funeral.. Sad but someone help get him killed. Yup he should of stayed out of this city now called Killphiladelphia city.

A newly released video shows the faces of many of the suspects as they rush through the door.
PHILADELPHIA, PA・4 HOURS AGO
6abc Action News

Tiffany Fletcher, a mother who leaves behind three boys, was simply sitting outside of the center taking a break.
PHILADELPHIA, PA・1 DAY AGO
6abc Action News

According to police, the 23-year-old man was shot in the head.
PHILADELPHIA, PA・21 HOURS AGO
6abc Action News

2 teens wounded after shooting in Hunting Park section of Philadelphia

Officers are focusing their investigation behind a row of businesses.
PHILADELPHIA, PA・1 DAY AGO

"I could be dead right now," Essam Zarkli said. "I'm 65 years old. You think I can take a punch like this?"
PHILADELPHIA, PA・3 HOURS AGO
6abc Action News

Philadelphia police are investigating after a crowd of juveniles ransacked a Wawa in the city's Mayfair section Saturday night.
PHILADELPHIA, PA・21 HOURS AGO
6abc Action News

A young child was rushed to the hospital after he was shot inside a home Saturday night, according to Philadelphia police.
PHILADELPHIA, PA・2 DAYS AGO

As gun violence continues to surge out of control in Philadelphia, police tell Action News the city has recorded its 400th homicide.
PHILADELPHIA, PA・15 HOURS AGO
6abc Action News

"The Streets Department apologizes to the neighbors of 2800 block of E. Clearfield St. for this inappropriate behavior by sanitation employees," the city said in a statement.
PHILADELPHIA, PA・11 HOURS AGO
6abc Action News

In each case, the victims describe two to four men who either acted like they needed help or blocked the driver in before showing a gun and stealing the vehicle.
PHILADELPHIA, PA・2 DAYS AGO

Be Kind: A "Lucky" kitten rescued by attentive driver in Montgomery County

The kitten, dubbed ''Lucky" by his rescuer, was stuck in the undercarriage of his car.
MONTGOMERY COUNTY, PA・8 HOURS AGO
6abc Action News

"I know what it's like to not feel appreciated," said Cynthaya Johnson. "I took that and I turned it into a positive."
PHILADELPHIA, PA・21 HOURS AGO
6abc Action News

The pedestrian was discovered approximately 150 ft. west of the initial crash scene, according to police.
PHILADELPHIA, PA・2 DAYS AGO
6abc Action News

It's a celebration of Hispanic and Latin American Heritage month on FYI Philly! With the flavors of Mexico in Kensington and the Italian Market, a Latin American film based here in Philly and the city's finest margaritas.
PHILADELPHIA, PA・1 DAY AGO
6abc Action News

A $15,000 reward is being offered for information into a gun store burglary in Montgomery County, Pennsylvania.
MONTGOMERY COUNTY, PA・15 HOURS AGO
6abc Action News

Police say the teen was shot three times in the back.
PHILADELPHIA, PA・4 DAYS AGO
6abc Action News

'They took over the town': Wildwood mayor reacts to deadly H20i car rally

Caught on video: A carjacker stole an SUV from a driveway as a mother and daughter were headed out for work and school in Northeast Philadelphia.
PHILADELPHIA, PA・3 DAYS AGO