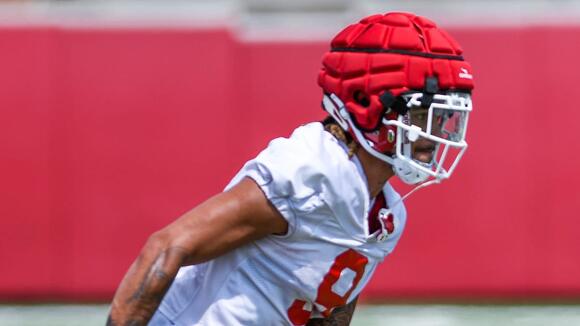 Transfer from OU "not throwing shade," but likes his situation better in Fayetteville.

A couple of years from now that might have been bulletin-board material, but not this year ... at least until the postseason if at all. The Razorbacks won't have to deal with the Sooners for a couple of years.

Haselwood led Oklahoma with 39 catches for 399 yards and a team-high six touchdowns.

For whatever reason, he entered the transfer portal and the timing was perfect to re-join his high school coach, Jimmy Smith, who just happens to be the Hogs' running backs coach.

He made it clear he "wasn't throwing shade" at Oklahoma, which may have meant towards the new coaching staff under Brent Venables.

Haselwood played under Lincoln Riley, who sailed out of town to USC and he sounded like he's already liking the situation in Fayetteville better.

"The coaches put me in more positions to contribute," he said. "Overall, this year's going to be great, not just for me but the whole team, especially the offense."

All the talk about replacing the production of Treylon Burks also may be wearing a little thin with some of the players. There's not really anything new there.

"I know people keep bringing up Burks and what-not and he was a great player," Haselwood said. "It doesn't stop there."

The guess is that means the Warren native wasn't the last good wide receiver on the roster.

"It's going to continue to get better every year," he said. "Even when I'm not here because we've good players who are younger, good players coming in."

He basically said what no one seems willing to let go. Hardly a day goes by you don't hear someone attempt to answer how the Hogs can replace Burks.

And Haselwood is part of finding a new way with a new team in a new year.

RAZORBACKS' GAME IN ARLINGTON AGAINST OKLAHOMA STATE EVEN INTERESTS NON-FANS

WHERE HOGS RANK IN FIRST TOP 25 POLL BY COACHES

WHAT AJ GREEN AND ROCKET SANDERS SAID AFTER SATURDAY'S PRACTICE

RAZORBACKS' SAM PITTMAN WANTS EVERYBODY TO WANT WHAT HE WANTS

Hogs Will Have to Keep Alabama's Bryce Young Off-Balance

Has Hogs’ Quarterback Flushed A&M Fumble Out of System?

Linebacker Will Anderson just one of talented group that can be difficult to move ball.
FAYETTEVILLE, AR・22 HOURS AGO

What they've seen and know they'll be facing in Alabama quarterback Bryce Young.
FAYETTEVILLE, AR・22 HOURS AGO
All Hogs

With Razorback Stadium decked in all red, the Crimson Tide want to empty it quick.
FAYETTEVILLE, AR・1 DAY AGO
All Hogs

It may be his youngest team, but also very talented but learning is slow.
FAYETTEVILLE, AR・1 DAY AGO
All Hogs

How Far Did Hogs Fall in Latest Rankings After Loss?

Spoiler alert: No. 2 Alabama is coming up Saturday and it won't be a Top 10 matchup.
FAYETTEVILLE, AR・2 DAYS AGO

What We Know Now About Hogs Headed to Alabama Game

This will be the best team each has faced and Crimson Tide defense is real.
TUSCALOOSA, AL・2 DAYS AGO
All Hogs

Since Europe, Musselman Has Done, Seen a Lot

Coach to meet with media today along with allowing them to watch practice
FAYETTEVILLE, AR・2 DAYS AGO
All Hogs

SEC Shorts Boots Arkansas Out of the Top 10 Meeting Room

Tennessee goes hard as it crashes the party shortly after Hogs leave
FAYETTEVILLE, AR・2 DAYS AGO