Rumble Ponies get shut out in series opener with Altoona 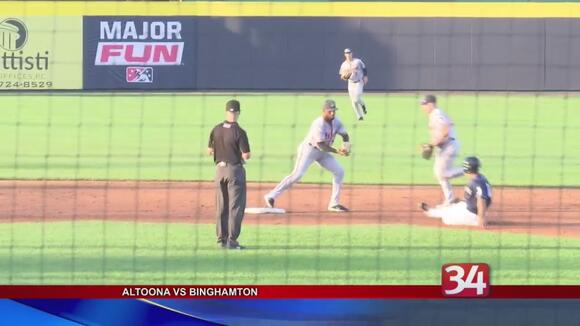 BINGHAMTON, NY – The Binghamton Rumble Ponies lost 6-0 to the Altoona Curve in the opening game of the series.

Aaron Shackelford opened the scoring in the top of the second with a 2-run home run to right field.

The Rumble Ponies would have a chance to get back into it in the third inning with the bases loaded but could not bring a single run in.

The score would remain at 2-0 until the sixth inning when Endy Rodriguez hit an RBI double to right center field to bring the score to 3-0.

Shackelford would then make another big impact in the seventh inning with an RBI double of his own that also put a runner on third as well.

The very next batter, Connor Scott drove both runner in to bring the score to 6-0 with a single.

Luis Ortiz gets the win for the Curve, throwing 6.0 innings, allowing 2 hits, 0 runs while striking out 8.

Vestal grabs first win of the season over Corning

BU Baseball to host 2023 America East tournament in May

Some exciting news for the BU baseball program as it was announced today that the defending America East champs will host the conference tournament this upcoming spring.
VESTAL, NY・2 DAYS AGO

Oneonta pulls away in second half, defeat Chenango Valley 35-6

Johnson City grabs win over Owego in Class B clash

A SUNY Broome student had a homecoming of sorts today as she debuted her new motivational program about setting goals and overcoming obstacles.
VESTAL, NY・1 DAY AGO
News Channel 34

Bearcats dominant in win over Niagara

Maine-Endwell takes care of business at home against Binghamton

Some of the best chefs in town are preparing to show off what can be done with ingredients grown here in Greater Binghamton.
BINGHAMTON, NY・1 DAY AGO
News Channel 34