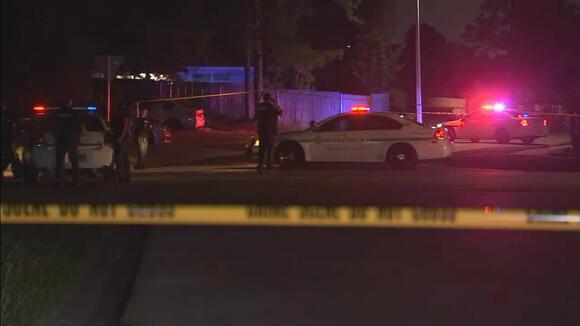 ORANGE COUNTY, Fla. — A homicide investigation is underway after a man was shot dead in Orlando, according to the Orange County Sheriff’s Office.

Deputies around 7:30 p.m. Tuesday responded to the 1800 block of Baywood Avenue in Orlando for reports of a shooting.

When deputies arrived, they found a man in his 20s who had been shot. He was taken to the hospital where he was pronounced dead, deputies said.

The homicide investigation is open and active. No further details were immediately available.

See a map of the scene below:

ORANGE COUNTY, Fla. — A man has died after being found with a gunshot wound Friday, the Orange County Sheriff’s Office said. Deputies said they were in the area of Magnolia Homes Road at about 12:15 when they heard gunshots. When police arrived at the scene, they found...
ORANGE COUNTY, FL・21 HOURS AGO
WFTV Channel 9 Orlando

Police: Woman charged with DUI after crashing into 3 officers, vehicle in downtown Orlando

ORLANDO, Fla. — A woman was arrested Wednesday evening after she crashed into three bike officers and a vehicle they had conducted a traffic stop on in downtown, the Orlando Police Department said. >>> STREAM CHANNEL 9 EYEWITNESS NEWS LIVE <<<. Police said the woman was speeding in a...
ORLANDO, FL・1 DAY AGO
WFTV Channel 9 Orlando

ORANGE COUNTY, Fla. — The Orange County Sheriff’s Office is asking for help solving a murder. According to the sheriff’s office, deputies were in the area of Ferguson Street between State Road 408 and Old Winter Garden Road around 2 a.m. Saturday when they heard gunshots. They...
ORANGE COUNTY, FL・2 DAYS AGO

ORANGE COUNTY, Fla. — There’s a push to get problem properties attracting violent crime under control in Orange County. The sheriff’s office and county leaders are putting the pressure on owners of what they consider nuisance properties to clean up or shut down. During a hearing on...
ORANGE COUNTY, FL・1 DAY AGO
WFTV Channel 9 Orlando

ORLANDO, Fla. — The Orlando Police Department on Thursday released a composite sketch of a person of interest in a suspicious incident at a Lake Nona park involving a woman who was walking her dog. >>> STREAM CHANNEL 9 EYEWITNESS NEWS LIVE <<<. Police said the incident happened between...
ORLANDO, FL・2 DAYS AGO
WFTV Channel 9 Orlando

DAYTONA BEACH, Fla. — More changes could be coming to the entertainment district in Daytona Beach. Neighbors have complained about issues with people being drunk, fights breaking out and vandalism. In June, the city put in an ordinance to force bars to close an hour earlier. However, the city...
DAYTONA BEACH, FL・22 HOURS AGO
WFTV Channel 9 Orlando

ORANGE COUNTY, N.C — A 17-year-old juvenile has been charged after two teens were found shot dead on Sunday. The bodies of Lyric Woods, 14, and Devin Clark, 18, were found by men riding four-wheelers in the woods in western Orange County on Sunday. Both victims had what appeared to be gunshot wounds, according to Orange County Sheriff Charles Blackwood.
ORANGE COUNTY, FL・2 DAYS AGO

LAKE COUNTY, Fla. — Family members of four women killed in a 2018 crash faced the driver accused of hitting them inside a Lake County courtroom on Thursday. After emotional testimony, a judge accepted a plea deal for Heather Finley, who was accused of causing the crash that killed Sha’Keila Smith, Kambrea Smith, Roslyn Felton and Tierra Chambers.
LAKE COUNTY, FL・1 DAY AGO
WFTV Channel 9 Orlando

‘Taking back the night’: Residents plan night walk in neighborhood where jogger was attacked

A Daytona Beach police officer is in trouble for allegedly choking a man. Investigators said Officer Kevin Allen pulled a man off the ground by tugging at his shirt. The man claims Allen choked him and mocked him during an arrest last year. Allen told investigators he thought the man...
DAYTONA BEACH, FL・2 DAYS AGO

ORLANDO, Fla. — The city of Orlando held an annual ceremony Friday that honored members of the U.S. military who are still missing in action. Mayor Buddy Dyer and other city officials met at the Dr. Phillips Center for the Prisoner of War MIA Recognition ceremony. City officials said...
ORLANDO, FL・53 MINUTES AGO
WFTV Channel 9 Orlando

SEMINOLE COUNTY, Fla. — Local counties are already planning for the worst. Seminole County leaders said they started preparations on Wednesday for a possible hurricane that could impact Central Florida next week. In the St. John’s River in Sanford, residents are concerned about this area and are monitoring it....
SEMINOLE COUNTY, FL・23 HOURS AGO
WFTV Channel 9 Orlando

SANFORD, Fla. — Tortoises at the Central Florida Zoo are now living in their own little paradise. The zoo unveiled a new living space for the radiated tortoises this week. The four special reptiles now have access to a peaceful landscape that includes a babbling brook and cypress stumps.
SANFORD, FL・1 HOUR AGO
WFTV Channel 9 Orlando

VOLUSAI COUNTY, Fla. — Rough surf and strong rip currents from Hurricane Fiona are expected. Volusia County Beach Safety is expecting up to 9-foot surf through Friday, and lifeguards want swimmers to be aware. Beach officials flew the red flag on Thursday, and that should continue through the weekend...
ENVIRONMENT・1 DAY AGO
WFTV Channel 9 Orlando

DELTONA, Fla. — Some Volusia County families will have a chance to pick up food items at no cost Friday morning. Farm Share, a nonprofit that aims to help food-insecure residents in Florida, will distribute free, fresh produce and non-perishable canned goods in Deltona. Organizers said the giveaway will...
DELTONA, FL・2 DAYS AGO
WFTV Channel 9 Orlando

LONGWOOD, Fla. — Just in time for Halloween, the Longwood Haunted History Tour is being resurrected for its third consecutive year. Along with being fun for the whole family, the tour also raises funds for the Longwood Historic Society. >>> STREAM CHANNEL 9 EYEWITNESS NEWS LIVE <<<. According to...
LONGWOOD, FL・5 HOURS AGO
WFTV Channel 9 Orlando

ORLANDO, Fla. — High school football is back in full swing as we enter week five of the season. For the first time this season, we had clear skies under the Friday night lights as teams battled it out on the gridiron. Check out all the highlights from week...
ORLANDO, FL・6 HOURS AGO