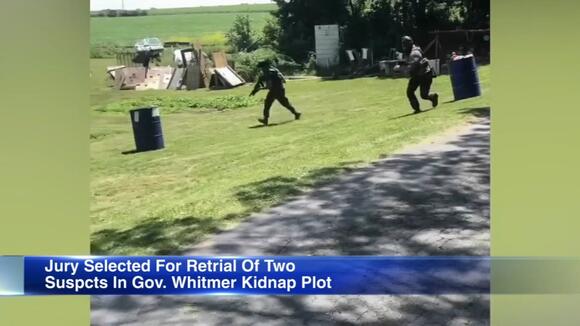 After questions about guns, politics and COVID-19, a jury was selected Tuesday for the second trial of two men charged with conspiring to kidnap Michigan Gov. Gretchen Whitmer over their disgust with restrictions early in the pandemic. The judge and lawyers settled on 18 people, including six alternates, to hear the case against Adam Fox and Barry Croft Jr. They're on trial again after a jury in April couldn't reach a verdict. Two co-defendants were acquitted and two more pleaded guilty earlier. RELATED | 2 acquitted, jury hung on 2 more in Michigan Gov. Gretchen Whitmer kidnapping case U.S. District Judge Robert Jonker repeatedly told prospective jurors that some familiarity with the case wouldn't mean exclusion. "It's not disqualifying to have views one way or the other," he said. "It's disqualifying if the views become more important than what the law or the evidence is." The plot to kidnap the Democratic governor followed training in Wisconsin and Michigan and two trips to scout her second home in northern Michigan, according to evidence in the first trial. Fox, 39, lived in the Grand Rapids area and Croft, 46, is from Bear, Delaware. They regularly communicated with other extremists who were angry with Whitmer and various public officials, evidence showed. Convicting or acquitting the men can't be influenced by "whether you like Governor Whitmer or dislike Governor Whitmer," the judge told the jury pool. "It's not if you think masking mandates or vaccine mandates or any other response was good or bad policy. It's not a proxy for any of those things." Some people were dismissed for health reasons or for political views they couldn't set aside. One man, whose mother is an elected county clerk, was scratched after he said he has no tolerance for violence linked to politics. "I don't think you would want me on the jury," he told Fox's lawyer. The jury will hear secretly recorded conversations and see text messages and social media posts favoring violence. Defense attorneys, however, will hammer away at the credibility of undercover FBI agents and informants who fooled the group into thinking they were allies. Lawyers for Fox and Croft will argue they were shielded by the First Amendment and entrapped by the government every step of the way. "Utter nonsense," Fox's attorney, Christopher Gibbons, said in spring, referring to a kidnapping plan. Daniel Harris and Brandon Caserta were found not guilty at the first trial. Ty Garbin and Kaleb Franks earlier pleaded guilty and will testify again against Fox and Croft. SEE ALSO | New motive revealed in militia plot to kidnap, murder Michigan Gov. Gretchen Whitmer Garbin told jurors at the first trial that the goal was to cause national chaos with a kidnapping close to the election between Joe Biden and then-President Donald Trump. Whitmer, who will not be called as a trial witness, disclosed Monday night that she tested positive for COVID-19 for the first time and was experiencing mild symptoms. In a recent interview, she said she believes she was the target of an "assassination plot," not just a kidnapping. "No one talks about it that way," Whitmer told The Washington Post. ___ White reported from Detroit. Cappelletti is a corps member for the Associated Press/Report for America Statehouse News Initiative. Report for America is a nonprofit national service program that places journalists in local newsrooms to report on undercovered issues.

Funny the whole thing was debunked and mistrials etc… and here we are … when is Whitless and the FBI going to be accountable. By the way they promoted the head of this plot to Washingtons head of FBI

"The defendant looked around once more and with no one in the immediate area, she herself climbed over the chain, crouched behind the 3-year-old, straddled him and with both hands pushed him off the platform, dropping 6.5 feet into Lake Michigan," Asst. State's Attorney Anne McCord Rodgers said.
CHICAGO, IL・11 HOURS AGO
ABC 7 Chicago

"If the merger goes through as proposed, it will break the railroad system," Bensenville Village Manager Evan Summers said.
ILLINOIS STATE・8 HOURS AGO
ABC 7 Chicago

Chicagoland animal groups are pitching in to help dogs impacted in Florida by Hurricane Ian.
CHICAGO, IL・2 DAYS AGO

PAWS Chicago returned to the city Tuesday with more than 50 pets rescued from Florida during Hurricane Ian.
CHICAGO, IL・5 HOURS AGO
ABC 7 Chicago

The new Inflation Reduction Act could help you get relief from rising electric and gas bills while also helping the environment.
ILLINOIS STATE・1 DAY AGO
ABC 7 Chicago

You've heard of farming, but what about hydroponic farming? A Mokena-based farm is tackling this new way to farm produce.
MOKENA, IL・3 DAYS AGO
ABC 7 Chicago

Sandberg Jewelers first opened in 1919 on Milwaukee Avenue in Chicago, and later moved to Irving Park, and then Skokie.
SKOKIE, IL・1 DAY AGO