Man accused of using stolen car to commit another crime 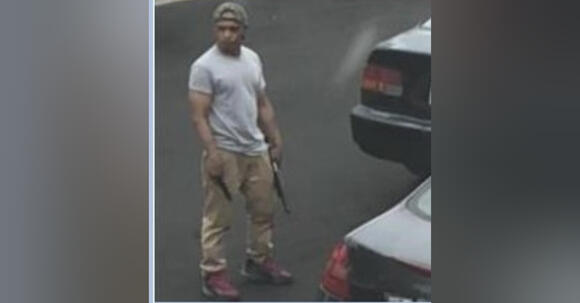 (KRON) — A man suspected of stealing a car and using it as a getaway vehicle in another crime is facing felony charges, according to a Facebook post from the the Daly City Police Department.

On June 4 a resident in Daly City reported that their Honda Civic was stolen from in front of their house. Soon after the stolen Honda was used as a getaway vehicle when suspects reportedly stole a catalytic converter in Daly City.

One of the suspects captured on surveillance video appeared to be acting as a lookout while holding a weapon of some sort, according to police. A few days later the stolen car was found in Oakland and returned to the owner.

KRON On is streaming now

Detectives with DCPD worked with Oakland PD to investigate the case. Michael Catangvi, 42, Oakland, was named as a suspect in the case. When he was identified Catangvi was already in custody in Alameda County for similar crimes. He faces multiple felony charges in San Mateo County.

Criminals are not fearful at all walking around with guns out in the open. What ever happened to America and why suddenly criminals are not afraid of crime? Must be covid?

FREMONT, Calif. (KRON) — A Fremont man was arrested on Wednesday after he was accused of cutting phone lines and fiber optic lines in a residential neighborhood, Fremont police said. Roshan Patel, 46, faces four felony counts. Throughout September, the Fremont Police Department said it has been investigating several incidents of cut phone and fiber […]
FREMONT, CA・21 HOURS AGO
KRON4 News

FAIRFIELD, Calif. (KRON) – A 16-year-old boy has been arrested by Fairfield police for shooting a 33-year-old Fairfield resident Tuesday morning, FPD announced in a statement Friday. The shooting took place just after midnight in the 800 block of East Tabor Avenue. Police say the victim was walking in his apartment complex’s parking lot and […]
FAIRFIELD, CA・17 HOURS AGO
KRON4 News

Two shot, another injured in Oakland on International Boulevard

OAKLAND, Calif. (KRON) — Two people were shot and another sustained injuries on the 900 block of International Boulevard Friday night, the Oakland Police Department confirmed to KRON4. OPD said all three victims are hospitalized in stable condition. Police were called to the address of the shooting just before 8:30 p.m. Friday. Officers found two […]
OAKLAND, CA・15 HOURS AGO

Man arrested for alleged assault with a stick in Mountain View

MOUNTAIN VIEW, Calif. (KRON) — A man was arrested after allegedly assaulting another man at a parking lot early Thursday morning, the Mountian View Police Department announced in a press release. The incident happened around 5:30 a.m. at the Safe Parking lot on Pioneer Way and Evelyn Avenue. KRON On is streaming news live now […]
MOUNTAIN VIEW, CA・1 DAY AGO
KRON4 News

SAN JOSE, Calif. (KRON) — A man has been arrested for the shooting death of a woman in San Jose, according to a tweet from the San Jose Police Department. At 6:13 p.m. on Friday evening, officers were called to the 5000 block of Alameden Expressway due to a report of an unresponsive woman in […]
SAN JOSE, CA・2 HOURS AGO
KRON4 News

Man stabbed in hand in Berkeley

MILPITAS, Calif. (KRON) — A carjacking suspect shot at Milpitas Police Department (MPD) detectives who attempted to stop a car burglary early Thursday morning, MPD said in a press release. The detectives were not struck and did not return fire. MPD said that detectives were near the 1200 block of Edsel Drive where they saw […]
MILPITAS, CA・2 DAYS AGO
KRON4 News

BERKELEY, Calif. (BCN) — Police in Berkeley are investigating two separate aggravated assault incidents that occurred Thursday night. The first incident occurred at the Lower Sproul Plaza on the University of California campus at 9:22 p.m. Police said a victim was assaulted in an unprovoked attack that resulted in facial injuries. There was no additional […]
BERKELEY, CA・1 DAY AGO
KRON4 News

2 robbed with assault rifle after Portola while waiting for rideshare: SFPD

SAN FRANCISCO (KRON) — Two people were robbed while waiting for a ride after the Portola music festival in San Francisco last weekend, the San Francisco Police Department said. Two suspects were arrested for the incident. The robbery happened at 3rd Street and Burke Avenue, according to police. The two suspects used an “AR type […]
SAN FRANCISCO, CA・2 DAYS AGO
KRON4 News

Police looking for man who shot at detectives, crashed on freeway

MILPITAS, Calif. (KRON) — A carjacking suspect shot at Milpitas Police Department (MPD) detectives who attempted to stop a car burglary early Thursday morning, MPD said in a press release. The detectives were not struck and did not return fire. MPD said that detectives were near the 1200 block of Edsel Drive where they saw […]
MILPITAS, CA・2 DAYS AGO
KRON4 News

OPD Chief speaks out in aftermath of Oakland school shooting

OAKLAND, Calif. (KRON) — In the aftermath of Wednesday’s mass shooting at a school in Oakland, in which six people were injured, Oakland Chief of Police LeRonne Armstrong spoke out about the incident and recent violence in the city. Do you have any updates on the suspects who are involved in this shooting?  “No, we […]
OAKLAND, CA・1 DAY AGO
KRON4 News

Here’s how a SF man tracked down his stolen items

SAN FRANCISCO (KRON) – The smash-and-grab of a car or a garage break-in doesn’t shock anyone in the Bay Area. But it might surprise you to hear about someone who was able to track down the thieves themselves. That was the case for a man in the Marina District who had a briefcase with thousands […]
SAN FRANCISCO, CA・18 HOURS AGO
KRON4 News

(BCN) — The Stockton Police Department on Wednesday said they are investigating patterns they have noticed in recent homicides. Police said they have investigated 43 homicides this year compared to 32 at the same time last year, with a clearance rate close to 50 percent. However, detectives have observed, based off data and evidence from […]
STOCKTON, CA・1 DAY AGO
KRON4 News

Man arrested after standoff with SJPD

SAN JOSE, Calif. (KRON) — The San Jose Police Department arrested a man on Wednesday night after he was involved in a standoff with officers, the department said on Twitter. The suspect barricaded himself in a business on the 5400 block of Snell Avenue. SJPD and special operations officers were called to the address at […]
SAN JOSE, CA・2 DAYS AGO
KRON4 News

OAKLAND, Calif. (KRON) — Two people were shot in Oakland’s Laurel District on Friday afternoon, the Oakland Police Department confirmed. The shooting happened on the 3900 block of Masterson Street just after 2:15 p.m. OPD said that officers found one victim with a gunshot wound at the scene. A second victim later arrived at a […]
OAKLAND, CA・22 HOURS AGO
KRON4 News

SAN JOSE, Calif. (KRON) – San Jose police executed two search warrants at alleged brothels Tuesday, according to a press release. The reported brothels are in the 90 block of Bassett Street and the 500 block of Winterberry Avenue. “Detectives conducted the investigation after receiving multiple tips from community members,” the press release states. “It […]
SAN JOSE, CA・2 DAYS AGO
KRON4 News

OAKLAND, Calif. (KRON) — In the tense aftermath of an Oakland school shooting, questions have arisen over whether victims were discouraged from cooperating with investigators. Six people, including two students, a counselor, a security guard, a carpenter, and a school staff member, were shot by two gunmen who stormed into Rudsdale Newcomer High School and […]
OAKLAND, CA・1 DAY AGO