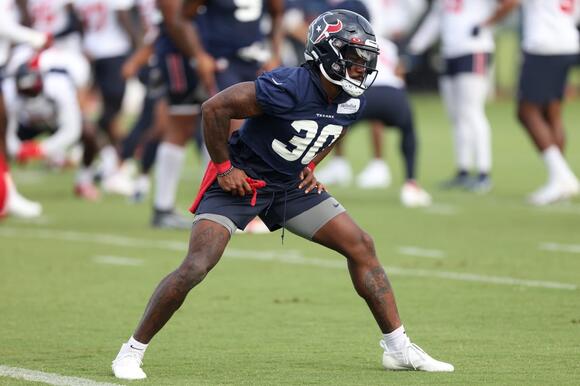 Houston Texans running back Darius Anderson is out for the season after suffering a knee injury.

The Houston Texans run game has been dealt a blow with Darius Anderson suffering an injury on Tuesday that will rule him out for the season.

The TCU product suffered a knee injury that resulted in a dislocation, among other damage, which Pro Football Network's Aaron Wilson reports will require immediate surgery.

The 24-year-old former undrafted free agent has previously spent time with the Dallas Cowboys and the Indianapolis Colts. Anderson also was on the Texans practice squad last season, and was likely battling for a backup role among this year's new-look running back corps.

A native of Richmond, Texas, Anderson rushed for 2,418 yards and 18 touchdowns in four seasons as a Horned Frog.

Earlier this summer, Anderson was arrested and charged with burglary and intent to rape - charges which were recently dropped with the Harris County District Attorney’s office "citing insufficient evidence," per SI .

"When it initially happened, of course I reached out to him (Anderson), and he told me that charges have to be dropped because it didn't happen that way," Texans coach Lovie Smith said Friday. "Normally when things come up like that, we let it play out in the system. I'm glad that they came to that conclusion."

With Anderson out, the Texans are now left with Marlon Mack, Rex Burkhead, rookie Dameon Pierce, Dare Ogunbowale, and Royce Freeman at running back.

Mack and Pierce have widely been seen as early favorites to start. However, Mack and Burkhead were listed top of Houston's first depth chart ahead of this weekend's preseason opener against the New Orleans Saints.

Minnesota Vikings superstar Justin Jefferson had a big idea for a touchdown dance last month against the Buffalo Bills: Jefferson intended to fake an injury and then do a little dance, but his offensive linemen ruined it by jumping on top of him. Teammate Alexander Mattison was apparently taking notes, because he finished what Jefferson started against the New York Jets on Sunday in Week 13.
1 DAY AGO
TexansDaily

Florida Atlantic head coach Willie Taggart was fired by the Owls on November 26th after finishing his tenure with a 15-18 record.  According to a new report released this Monday afternoon, though, it appears Taggart won't be out of a job for very long.  Per Doug Samuels of Football ...
7 HOURS AGO
Sports Illustrated

After just one night with the new program, a top recruit already has chosen Colorado because of its new coach.
1 DAY AGO