6abc Action News
2022-08-11
State police say two people are dead after a Megabus crashed on the New Jersey Turnpike Tuesday evening. The crash happened shortly before 7 p.m. in Woodbridge Township, Middlesex County. "There was enough time to register what was about to happen, which was terrifying," said Reid Kleinman, a Philadelphia resident who was on board the bus. Kleinman was sitting on the lower level of the double-decker bus at the time. "I thought, 'I hope it's a rolling stop.' And then once it didn't slow down, I thought, 'I hope this isn't it. I really hope this isn't it,'" he said. Police say the bus, with 22 passengers and the driver on board, was traveling southbound in the left lane of the outer roadway. Investigators say the bus driver lost control of the bus near mile marker 93.2 and hit a Ford F-150 traveling in the left-center lane. 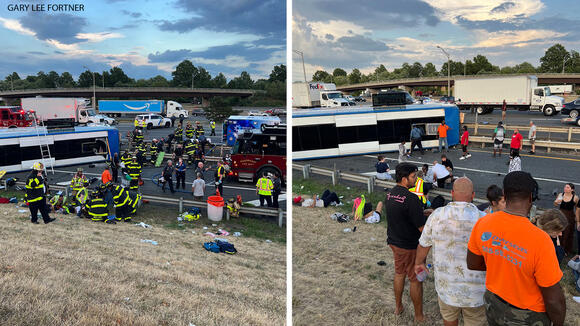 After impact, the bus went off the road, struck a guardrail, and overturned onto the Thomas Edison Service Area entrance ramp. "We heard kind of a pop, explosion type thing - like a small one - and the bus started rattling and shaking and it started to veer to the right, and across a couple lanes of traffic, hit a barricade, crashed and flipped over," Kleinman said. "Everybody else was kind of out of it, really out of it. There was one kid, he was the only one wearing a seatbelt and he was still hanging by the seatbelt. There's broken glass, there's smoke everywhere - just general confusion," said Kleinman. Police say of the 22 passengers on board, two have died. One of them, 59-year-old Cheryl Johnson of Bronx, New Jersey, was pronounced dead at the scene. Another victim, 66-year-old Cecilia Kiyanitza of Woodbury, New Jersey, was airlifted to the hospital but later died. Meanwhile, two other passengers sustained serious injuries and 14 sustained non-life-threatening injuries. Four passengers were unharmed. The driver of the bus was also seriously injured, police say. "Went to see the bus driver who was pretty much unconscious. Woke him up and tried to get him out, but his leg was stuck and broken under the steering wheel or something," he said. Kleinman is grateful to the good Samaritans who stopped to help and is feeling lucky to be alive. "It's a real tribute to humanity how people are just willing to stop and help. There were tens of people with cases of water, asking how everyone was doing, making sure everyone ok. It was just incredible," he said. The driver of the Ford was not hurt. As for Kleinman, he suffered a concussion - along with bumps and bruises - in the crash. Police say the crash remains under investigation.

Jesus.. 🙏🙏 I would never step on one of those Mega buses.. you have to wonder if those drivers know how to handle that bus..

awwwww Sincere condolences to the family for the one Person who did died. Prayers going up for recovery of those that was seriously injured in this bus crash. wow .

People driving pickup trucks drive like they're always in a rush to speed and intimidate the road.

Explosives were found in a scrapyard on Friday in the Port Richmond section of Philadelphia.
PHILADELPHIA, PA・5 HOURS AGO
6abc Action News

Video from Chopper 6 showed a small bus stopped at the scene and at least two other damaged vehicles.
PHILADELPHIA, PA・1 DAY AGO
6abc Action News

2 injured after stabbing at Red Roof Inn in Newark, Delaware

Two people were injured after a stabbing at a Newark, Delaware hotel on Friday morning.
NEWARK, DE・5 HOURS AGO
6abc Action News

3 people, including father and son, charged in the death of Philadelphia rapper PnB Rock

A man wanted in connection with the killing of rapper PnB Rock was apprehended in Las Vegas but police say his 17-year-old son was the actual gunman.
PHILADELPHIA, PA・16 HOURS AGO
6abc Action News

The Haverford Township Police Department in Delaware County, Pennsylvania has made an arrest in connection with a series of violent incidents.
HAVERFORD, PA・16 HOURS AGO
6abc Action News

Roxborough community steps in for victims, families impacted by shooting near high school

Police are searching for the gunman caught on video shooting two teenagers in the Kingsessing section of Philadelphia.
PHILADELPHIA, PA・12 HOURS AGO

There have been more than 1,000 carjackings year to date, compared to fewer than 500 at the same point in 2021.
PHILADELPHIA, PA・1 DAY AGO
6abc Action News

"We heard from him back and forth saying it's brutal. I've never seen anything like this," said Margie DiGiovanni of Drexel Hill whose son lives in Ft. Myers, Florida.
PHILADELPHIA, PA・16 HOURS AGO
6abc Action News

Crews worked all night to put out the hot spots of a massive junkyard fire in the Hunting Park section of Philadelphia.
PHILADELPHIA, PA・2 DAYS AGO
6abc Action News

"The plane was on fire and ended up kind of exploding," a witness said.
LEHIGH COUNTY, PA・1 DAY AGO

Man, 73, dies after being struck by hit-and-run-driver; suspect surrenders

Police say the driver of a gold Honda Pilot ran the victim over and then fled the scene.
PHILADELPHIA, PA・1 DAY AGO
6abc Action News

The SUV was found in a parking lot along the 6100 block of Passyunk Avenue in Southwest Philadelphia.
PHILADELPHIA, PA・1 DAY AGO
6abc Action News

The suspects hit the 82-year-old with a hard object, grabbed a gift he had purchased for his wife at the Willow Grove Park Mall and then stole his truck, police say.
MONTGOMERY COUNTY, PA・1 DAY AGO

A suspect has been arrested after a mother and daughter were carjacked while headed out for work and school in Northeast Philadelphia.
PHILADELPHIA, PA・1 DAY AGO
6abc Action News

A fire inside a community center in Mercer County, New Jersey reached five alarms before firefighters were able to get it under control Friday morning.
MERCER COUNTY, NJ・5 HOURS AGO
6abc Action News

The family describes Saniah Moore as a fun person with a big heart, and most importantly a great mother to her 7-month-old daughter.
PHILADELPHIA, PA・1 DAY AGO
6abc Action News

According to police, the crash happened near mile marker 349 in Feasterville. Motorists were asked to seek an alternative route.
BUCKS COUNTY, PA・3 DAYS AGO