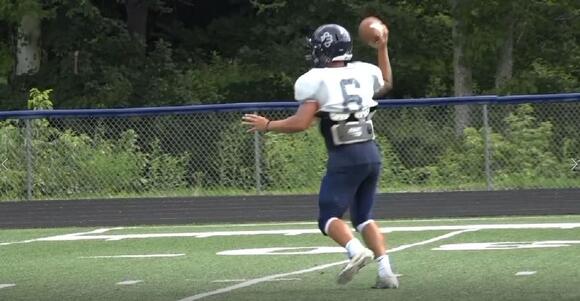 BLACKSVILLE, W.Va – The 2021 season was a special one for the Clay-Battelle Cee-Bees as they returned to the Class A playoffs for the first time since 2014 before bowing out to eventual state champions Ritchie County.

Now, entering his 27th year at the helm in Blacksville, head coach Ryan Wilson is plenty familiar with how deep the ties between Cee-Bee football and the Clay-Battelle community run and he says that his guys know exactly what it takes to make their friends and families proud again.

“It was great for our school and our community and for that football team. They had a lot of hard work and it paid off and they got some playoff experience,” he said, “They got their picture on the wall and the whole works. This group coming in now, they know what the playoffs is all about.

That taste of success is certainly a motivator coming into the fall. With the majority of the core at the skill positions returning and three starters back on the offensive line, these players certainly have expectations for performance equal to or better than their 8-2 record a year ago.

Jacob Kassay returns at right tackle and he sees a definite change in the mindset for this team during fall camp.

“I really think everybody’s bringing the intensity this year,” he said, “They’re all really, they got that taste. They got that taste and they want it again. I’m one of those people. I’d like to be there again. It’s really fun.”

Carson Shriver takes the reins fully at quarterback once again this year ahead of his senior season in the blue and white. Despite earning a second team all-state nod for his dual-threat abilities last year, he sees the bigger picture when it comes to this team’s success and he says it goes well beyond his performance alone.

“We have a really strong front five, six. We have a couple nice tight ends. We’ve got Max, my little brother, he’s going to be one of the main guys out there lead blocking for me,” he said, “I think our strong game right now is our run game bur we’ve also got Zach Hall out there at receiver, Adam Kolat, Mason Chisler. We’re deep all the way around.”

The group that does the blocking for Shriver is the biggest question in mind for Wilson in the run-up to the season. With a couple holes to fill, the Cee-Bees are trying a few combinations up front to see who fits best in what spots but at the end of the day, the head coach believes they have the talent to be just fine in the trenches.

“We have a lot of strengths with it. Our offensive line, we’re replacing some kids there so that’s a little bit of a work in progress. We have bodies. We’ve got a lot of good kids,” Wilson said, “Right now we’re trying to figure out, it’s like a puzzle. How do we look best with that offensive line. They’re going to get the job done. We just have to figure it out.”

While you can break down the depth chart all you want and diagram enough plays to fill an NFL playbook, the story at the heart of this Clay-Battelle program is the love that the community has for it and the love that it gives right back to it’s fans.

With that return to the postseason last year, these players understand how special things really can be in Blacksville if they can make it two in a row.

“I’d say that would be really awesome,” Kassay said, “That’d be a great feeling to walk through the school and just know that everyone’s like, ‘Holy cow. That’s the football team. They’re so good’ or ‘They’re going to the playoffs again this year.’ That’d be amazing. “

Clay-Battelle kicks off its bid for a second straight playoff appearance on August 26 at home against Massanutten, VA.

BRIDGEPORT, W.Va – If you’ve been around high school football in north central West Virginia for long enough, you know what Bridgeport Indians football is all about. Armed with head coach Tyler Phares’ single wing offense, Bridgeport is grinding opponents down to the tune of over 2000 rushing yards in just six games, including 356 […]
BRIDGEPORT, WV・14 HOURS AGO
WBOY 12 News

BRIDGEPORT, W.Va – With sectional play less than two weeks away, high school soccer teams are seeking to build momentum on the way to the postseason. Both the Bridgeport boys and girls teams were able to do that Tuesday night. Kicking things off on the boys side, the Indians hosted Buckhannon-Upshur in a matchup not […]
BRIDGEPORT, WV・1 DAY AGO
WBOY 12 News

WHEELING, W.Va – The WVSSAC high school golf state championships got underway today in Wheeling as West Virginia’s best took on the Jones course at Oglebay. In Class AAA, it was a solid day for Morgantown as the Mohigans finished fifth out of the eight teams but 19 strokes back of first place Wheeling Park. […]
WHEELING, WV・1 DAY AGO
WBOY 12 News

The Veterans Golf Classic teed off at The Pines Country Club in Morgantown. The event was hosted by Operation Welcome Home.
MORGANTOWN, WV・14 HOURS AGO

How to become a soccer referee in West Virginia

FAIRMONT, W.Va. (WBOY) — Seth Burton was a member of the Fairmont community, and after he died in 1999, his friends found a way to memorialize him. The 12th annual Seth Burton Memorial Disc Golf Tournament was held at Morris Park in Fairmont on the disc golf complex that was built in honor of Burton. […]
FAIRMONT, WV・3 DAYS AGO
WBOY 12 News

Upgrades and renovations are being made to East-West Stadium in Fairmont.
FAIRMONT, WV・1 DAY AGO
WBOY 12 News

CLARKSBURG, W.Va. (WBOY) — A recent study ranked the best small American cities to live in and gave Morgantown a top-50 score in the nation for quality of life. Five West Virginia cities were included in the Wallethub ranking: Morgantown, Parkersburg, Charleston, Wheeling and Huntington. A total of 1,319 American cities were ranked based on […]
MORGANTOWN, WV・1 DAY AGO
WBOY 12 News

MORGANTOWN, W.Va. (WBOY) – On Monday, University High School held its 8th Annual Showcase of Bands in Morgantown. A Showcase of Bands is where the event is all about the marching bands and features a night of music, drill, and show routines. The event showcased 15 local bands who have put in hundreds of hours […]
MORGANTOWN, WV・1 DAY AGO