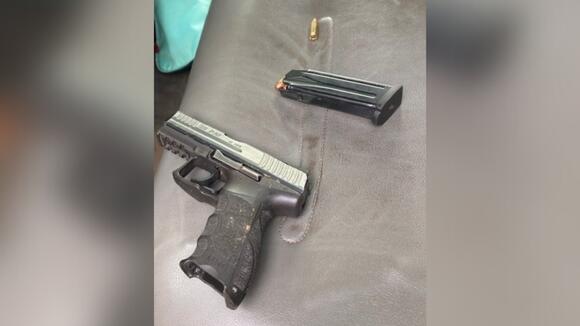 PORTLAND, Ore. ( KOIN ) – A wanted man was arrested on Monday after reportedly shooting into a tent in Portland, according to the Portland Police Bureau.

PPB identified the man as 27-year-old Nasradin Hassan, who authorities say was wanted in connection to a domestic violence case, identity theft cases and theft.

Multnomah County couple kicked out of motel shelter due to pregnancy, lawsuit alleges

Officers responded to the reported shooting at the NE MLK and NE Everett St. intersection. PPB said they found Hassan a short time later and arrested him.

Police said they also recovered a 9mm Kimber handgun, which was also from the theft case.

No injuries were reported from the shooting, according to PPB.

A police chase Sunday night ended with a vehicle slamming into an apartment building in Northeast Portland, according to officials.
PORTLAND, OR・23 HOURS AGO
KOIN 6 News

After a fatal shooting took place in the Sumner Neighborhood early Sunday morning, Portland police announced Monday that they have identified the victim.
PORTLAND, OR・16 HOURS AGO
KOIN 6 News

An unidentified man who allegedly groped a teenager's breasts at a Southeast Portland bus stop remains at large, police said.
PORTLAND, OR・15 HOURS AGO

A man has died after a shooting in the Sumner Neighborhood early Sunday morning, the Portland Police Bureau announced.
PORTLAND, OR・1 DAY AGO
KOIN 6 News

Salem police arrested a 16-year-old boy for allegedly starting a fire at a residence on Friday.
SALEM, OR・14 HOURS AGO
KOIN 6 News

Portland’s homicides at same pace as record in 2021

PPB says there have been 68 homicides so far this year, which comes after a record number of homicides in 2021.
PORTLAND, OR・14 HOURS AGO
KOIN 6 News

The suspect is being lodged at Columbia County Jail on counts of Theft I, Unlawful Entry into a Motor Vehicle, and multiple outstanding warrants.
PORTLAND, OR・18 HOURS AGO

A woman suspected of being involved in a Portland burglary and car theft was arrested by Clark County deputies after numerous hit-and-run reports in the Hockinson area.
PORTLAND, OR・1 DAY AGO
KOIN 6 News

The Portland Police Bureau's former assistant chief Ryan Lee was asked to step down from his position as police chief in Boise.
PORTLAND, OR・21 HOURS AGO
KOIN 6 News

A speeding driver slammed into a PPB patrol car in Southeast Portland, sending two officers to the hospital, authorities tweeted.
PORTLAND, OR・2 DAYS AGO
KOIN 6 News

Nine people lost their apartments when a car fire spread to the building and carport, also consuming two other vehicles, in Beaverton Sunday afternoon.
BEAVERTON, OR・1 DAY AGO

Two people were hospitalized Saturday morning after crashing into a tree.
PORTLAND, OR・2 DAYS AGO
KOIN 6 News

Motorcyclist dies after crashing into delivery van in Salem

A motorcyclist is dead after crashing into a delivery van in Salem.
SALEM, OR・2 DAYS AGO
KOIN 6 News

Woman shot to death at Wallace Park in NW Portland

A woman was shot and killed in a Northwest Portland park not far from Chapman Elementary School late Friday night, authorities said.
PORTLAND, OR・3 DAYS AGO
KOIN 6 News

Parents of gun violence victims speak out against ‘epidemic’

A deadly epidemic of gun violence is devastating Portland and the Black community is reeling especially hard.
PORTLAND, OR・1 DAY AGO
KOIN 6 News

Despite protests from neighbors in the Eliot neighborhood, the Portland Bureau of Transportation cut down a large tree on Monday.
PORTLAND, OR・19 HOURS AGO
KOIN 6 News

Some Oregon parks officials say high demand for crowded campsites is leading to arguments, fistfights and even so-called “campsite pirates.”
SALEM, OR・22 HOURS AGO
KOIN 6 News

A stretch of Highway 30 will be closed part of this week, so crews can repair the areas damaged by landslides in 2021.
TROUTDALE, OR・20 HOURS AGO