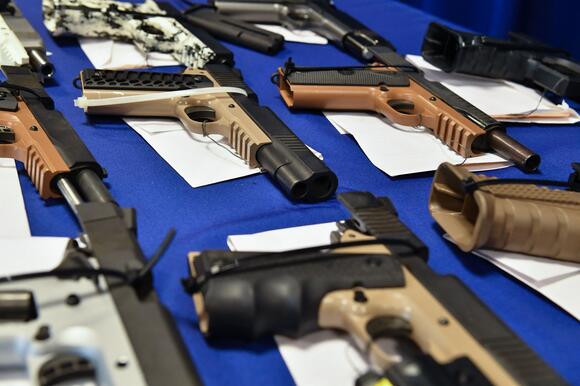 DALY CITY, Calif. ( KRON ) — A former volunteer with the Contra Costa County Sheriff’s Office pleaded not guilty Tuesday to charges associated with making and distributing ghost guns, according to a statement from Office of the District Attorney of Contra Costa County.

Routine traffic stop yields over a pound of weed

John Michael King, 54, of Clayton, was arraigned in Martinez on Tuesday for two felony counts of possession of assault weapons and one felony count of manufacturing or assembling an unregistered firearm, otherwise known as a ghost gun.

In May KRON4 reported that King’s wife had attempted to report him to police multiple times. In early January, the DA’s Office served King with a search warrant before seizing 132 guns from safes in his home. Authorities also found equipment that is used to make ghost guns on his property, according to the DA’s Office.

KRON On is streaming now

The DA’s Office notes that King allegedly illegally manufactured a .22 caliber rifle and had a .223 assault rifle and a .556 pistol in his possession. King will be back in court on August 29 in Martinez.

PALO ALTO, Calif. (KRON) — The Palo Alto Police Department is investigating vandalism at the office of a Catholic church on Friday, according to a press release. Police received a call around 4:10 p.m. regarding an unknown suspect who spray-painted on a statue and a wall at the St. Thomas Aquinas Pastoral Center. An investigation […]
PALO ALTO, CA・14 HOURS AGO
KRON4 News

SANTA ROSA, Calif. (BCN) — Santa Rosa police arrested two drivers for driving under the influence during a Friday night traffic checkpoint. The checkpoint was conducted between 9 p.m. Friday and 2 a.m. Saturday in the area of College Avenue and Morgan Street. During the checkpoint, officers screened 921 vehicles. In addition to two DUI […]
SANTA ROSA, CA・18 HOURS AGO
KRON4 News

OAKLAND, Calif. (BCN) — The Oakland Police Department is investigating a Saturday morning shooting that left one injured. At 9:15 a.m., police responded to reports of a shooting in the 6600 block of Bancroft Avenue. At the scene, officers provided medical treatment to an injured victim until they were sent to a local hospital. The […]
OAKLAND, CA・2 HOURS AGO

DALY CITY, Calif. (KRON) — An elderly woman was assaulted and robbed after three men entered her Daly City home. Police say they’re still investigating and are looking for the suspects. Security video shows they were dressed as utility workers. KRON4 spoke with the woman’s granddaughter about all the details and how she’s doing now. […]
DALY CITY, CA・13 HOURS AGO
KRON4 News

Suspect arrested for slashing hundreds of car tires in Alameda

ALAMEDA, Calif. (KRON) — Hundreds of car tires were slashed in Alameda Friday night. Police say a suspect is in custody, but that does not help the victims left to cover the costly repairs. A rude awakening for Bahta Tesfu and up to 200 other people in Alameda on Saturday. “This is crazy,” Tesfu said. […]
ALAMEDA, CA・16 HOURS AGO
KRON4 News

FAIRFIELD, Calif. (KRON) – A 16-year-old boy has been arrested by Fairfield police for shooting a 33-year-old Fairfield resident Tuesday morning, FPD announced in a statement Friday. The shooting took place just after midnight in the 800 block of East Tabor Avenue. Police say the victim was walking in his apartment complex’s parking lot and […]
FAIRFIELD, CA・1 DAY AGO
KRON4 News

FREMONT, Calif. (KRON) — A Fremont man was arrested on Wednesday after he was accused of cutting phone lines and fiber optic lines in a residential neighborhood, Fremont police said. Roshan Patel, 46, faces four felony counts. Throughout September, the Fremont Police Department said it has been investigating several incidents of cut phone and fiber […]
FREMONT, CA・1 DAY AGO

OAKLAND, Calif. (KRON) — In the tense aftermath of an Oakland school shooting, questions have arisen over whether victims were discouraged from cooperating with investigators. Six people, including two students, a counselor, a security guard, a carpenter, and a school staff member, were shot by two gunmen who stormed into Rudsdale Newcomer High School and […]
OAKLAND, CA・1 DAY AGO
KRON4 News

OPD Chief speaks out in aftermath of Oakland school shooting

OAKLAND, Calif. (KRON) — In the aftermath of Wednesday’s mass shooting at a school in Oakland, in which six people were injured, Oakland Chief of Police LeRonne Armstrong spoke out about the incident and recent violence in the city. Do you have any updates on the suspects who are involved in this shooting?  “No, we […]
OAKLAND, CA・1 DAY AGO
KRON4 News

(BCN) — The Stockton Police Department on Wednesday said they are investigating patterns they have noticed in recent homicides. Police said they have investigated 43 homicides this year compared to 32 at the same time last year, with a clearance rate close to 50 percent. However, detectives have observed, based off data and evidence from […]
STOCKTON, CA・2 DAYS AGO

OAKLAND, Calif. (KRON) — A shooting that occurred Saturday night in Oakland has left two people dead and another two injured, according to Oakland Police Department. The shooting happened shortly before 10 p.m. After arriving on scene, officers located multiple victims with gunshot wounds. Life-saving efforts were provided to two individuals with gunshot wounds, but […]
OAKLAND, CA・2 HOURS AGO
KRON4 News

Man arrested for alleged assault with a stick in Mountain View

MOUNTAIN VIEW, Calif. (KRON) — A man was arrested after allegedly assaulting another man at a parking lot early Thursday morning, the Mountian View Police Department announced in a press release. The incident happened around 5:30 a.m. at the Safe Parking lot on Pioneer Way and Evelyn Avenue. KRON On is streaming news live now […]
MOUNTAIN VIEW, CA・2 DAYS AGO
KRON4 News

BERKELEY, Calif. (BCN) — Police in Berkeley are investigating two separate aggravated assault incidents that occurred Thursday night. The first incident occurred at the Lower Sproul Plaza on the University of California campus at 9:22 p.m. Police said a victim was assaulted in an unprovoked attack that resulted in facial injuries. There was no additional […]
BERKELEY, CA・2 DAYS AGO
KRON4 News

Man carjacked at gunpoint in Pacifica

A man was carjacked at gunpoint in Pacifica on Friday, according to the Pacifica Police Department.
PACIFICA, CA・19 HOURS AGO
KRON4 News

SAN JOSE, Calif. (KRON) — A man has been arrested for the shooting death of a woman in San Jose, according to a tweet from the San Jose Police Department. At 6:13 p.m. on Friday evening, officers were called to the 5000 block of Almaden Expressway due to a report of an unresponsive woman in […]
SAN JOSE, CA・1 DAY AGO
KRON4 News

VALLEJO, Calif. (KRON) — Two people were killed in separate shootings in Vallejo Wednesday night, the Vallejo Police Department said in a press release. The shootings happened just three minutes and two blocks apart from each other, and VPD believes them to be related. The first homicide happened on the 1500 block of Sacramento Street […]
VALLEJO, CA・2 DAYS AGO