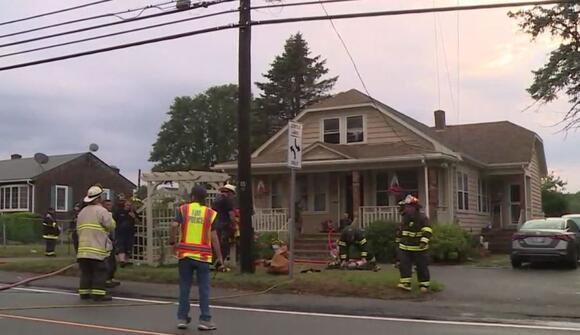 BRISTOL, R.I. (WPRI) — Janet Dewey was inside her Bristol home at the Courtyard Apartment complex Tuesday evening when all of the sudden she saw a bright flash of light outside.

“Everything sparked,” she recalled. “I jumped off the couch.”

“It frightened the life out of me, I’ve never witnessed anything like that before,” she said. “It was powerful.”

The situation was similar all across town, with fast-moving thunderstorms damaging homes and flooding roadways.

“[It was] pretty intense,” Cheatom said. “There were three structure fires and a bunch of trees hit.”

Firefighters rushed to a home just down the street from Dewey’s apartment complex, which was also hit by a lightning strike.

While the home isn’t a total loss, Cheatom said the residents will be displaced temporarily.

“Suddenly, I saw a bolt of fire,” she recalled. “It was red and yellow … there was a large boom and I screamed.”

Bené said the lightning hit the chimney, sending bricks flying all over the yard and into the driveway.

Thankfully, firefighters told Bené that the lightning went through the chimney and out into the yard, as opposed to charging through the house.

When asked what residents can do to protect themselves from lightning strikes, Cheatom was frank.

“You just have to stay in the house and pray. That’s it,” he said. “Mother Nature always wins.”

No injuries were reported.

The American Red Cross said its providing assistance to four families – seven adults and three children – after the fires.

Weather Updates Where You Are: Get the Pinpoint Weather 12 App for your customized forecast »

Tim White and Johnny Villella contributed to this report.

PROVIDENCE, R.I. (WPRI) — First responders in Providence had a busy Sunday morning, searching for a man who witnesses initially thought may be in the water.   Officers received reports of a car in the water around 5:45 a.m. near the Gano Street Park Boat Launch.  Upon investigating, officers found a woman in wet clothing who said […]
PROVIDENCE, RI・1 DAY AGO
WPRI 12 News

Cyclists, joggers and walkers will no doubt be excited to hear that a couple of dangerous detours in Barrington will soon be a thing of the past.
BARRINGTON, RI・18 HOURS AGO
WPRI 12 News

Two people were injured in a shooting near a Central Falls park Monday evening, according to police.
CENTRAL FALLS, RI・14 HOURS AGO

Earlier this year, the Middletown Police Department became the hub for donations of surplus tactical gear to send to Ukraine.
MIDDLETOWN, RI・16 HOURS AGO
WPRI 12 News

WARWICK, R.I. (WPRI) — A Warwick business is now boarded up after a car drove through the front of the building on Saturday. A maroon vehicle could be seen sticking out of the front window of Wild Birds Unlimited on Bald Hill Road. Police have not released many details, but say they’re investigating the incident. […]
WARWICK, RI・2 DAYS AGO
WPRI 12 News

The man has not yet been identified, and it's unclear what led up to the standoff.
CENTRAL FALLS, RI・15 HOURS AGO
WPRI 12 News

Crews rescued a boater after a vessel sank during Thursday's storm, according to the Portsmouth Fire Department.
PORTSMOUTH, RI・3 DAYS AGO

The boil water advisory for both North Attleboro and Plainville has been lifted, according to a joint statement from both towns.
PLAINVILLE, MA・3 DAYS AGO
WPRI 12 News

EAST PROVIDENCE, R.I. (WPRI) — From North Kingstown to Barrington, many 12 News viewers captured a beam of light moving through the sky Saturday evening. Viewers started sending in reports after noticing the display around 7:45 p.m. The light in the sky is described as something that looks like a meteor or a comet. A […]
BARRINGTON, RI・2 DAYS AGO
WPRI 12 News

Police: Woman driven into river by man she met on dating app

Police are investigating after a woman was reportedly driven into the Seekonk River by someone she met on a dating app.
SEEKONK, MA・15 HOURS AGO
WPRI 12 News

Showers and t’storms will wind down overnight with partial clearing toward dawn. Those storms brought some strong wind gusts, very heavy rain and quite a bit of lightning. There may have been a little bit of hail, too. Monday will be quieter with clearing skies. Temperatures at the bus stops in the morning will be […]
NEWPORT, RI・1 DAY AGO

NARRAGANSETT, R.I. (WPRI) — A vigil was held in Narragansett Sunday to honor the life of a Charlestown woman who was killed in a stabbing on Monday. Friends and family of the victim, 45-year-old Grya Pihlkrantz, said she always made everyone feel welcome. “People that don’t have friends and family around here, that feel invisible, […]
CHARLESTOWN, RI・1 DAY AGO
WPRI 12 News

Arcade Snacks, a Massachusetts-based company, is recalling its 15-ounce packages of candy corn because they might contain egg, which is not listed as an ingredient on the label.
AUBURN, MA・19 HOURS AGO
WPRI 12 News

The DCYF said it's had contact with the child's family in the past, but was not involved at the time of this incident.
PROVIDENCE, RI・19 HOURS AGO
WPRI 12 News

A man is facing numerous charges after an hours-long standoff in Central Falls on Monday.
CENTRAL FALLS, RI・1 HOUR AGO
WPRI 12 News

FALL RIVER, Mass. (WPRI) – Police in Fall River are investigating an act of vandalism at Veterans Memorial Bicentennial Park across from a war memorial. The vandalism happened sometime between Sunday and Monday, according to Fall River Deputy Chief of Police Barden Castro. The vandal tagged the pavement underneath a bench with black spray paint. The […]
FALL RIVER, MA・3 DAYS AGO
WPRI 12 News

Police arrest man accused of running out on restaurant tabs

Anthony Addesa, 58, of Palm Beach, Florida, was nabbed in Woonsocket Friday based on charges filed in Middletown.
3 DAYS AGO
WPRI 12 News

Owen Gugliotta, a student at the University of Tampa, was forced to flee. But his dad tells 12 News they haven't been able to find him a flight back home to Portsmouth.
PORTSMOUTH, RI・15 HOURS AGO
WPRI 12 News