Beavers looking to bounce back for 2022 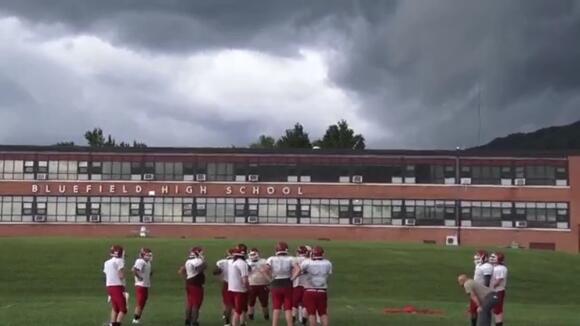 The Bluefield Beavers hope the worst is in the past, as they lost more than a quarter of their season in 2021.

“But that messed with us a lot during the early season,” said Head Coach Fred Simon. “We missed three straight weeks and didn’t get to practice, so hopefully we can make up for that and then have a smoother year.”

Despite the cancellations, injuries, and starting a few steps behind, Fred Simon and the Beavers rallied to the AA state semifinals. Although they fought to the very end, the Beavers still came up short.

“We went to point pleasant, don’t get me wrong. And going to North Marion and winning. And we were on a pretty good roll after having to sit out three weeks. It’s just Ryker got hurt and we just lost the mojo a little bit,” Simon told 59News.

Simon added that as a team they need to learn to succeed without their star players. He hopes a full offseason, and the foundation the program is built upon will help the guys on the field shine under the spotlight and add to the legacy.

“Live up to it and then be your own player. That comes first,” Simon told us. “But live it up and then make them proud of you have to end the season.”

Senior quarterback Caleb Fuller finds himself right in the fold going into the season, as he tries to take what he learned from graduates Carson Dee and Ryker Brown and translate it into touchdowns.

The senior is ready to show what he is made of.

“I would say I’m more of a pocket passer, you know that,” said Fuller. “I mean, if I have to run, I will. Now I feel like I’m pretty fast you know, I’ll stick my head down and run a little bit.”

An impactful player not only on the gridiron but also on the hardwood, Fuller is not a stranger to marquee matchups. He looks to take advantage of that experience when he steps under center in what is one of the biggest high school football rivalries in the entire country.

“It’s going to be a special experience, crazy atmosphere. But, you know, I’m excited for that. It’s awesome experience. not a lot of people get to do it,” added Fuller.

Luckily, he will not have to do it alone.

With Amir Hairston beside him in the backfield, and a battalion of beavers backing them up, they feel prepared to take on anything Graham, Indy, or Fairmont throw at them.

“I’m not worried about that. I really don’t care who they got. you gotta catch me,” added junior running back Amir Hairston.

OAK HILL, WV (WVNS) – It’s Homecoming Week at Oak Hill High School and students and teachers are dressing up for Spirit Week. All week long there are fun activities going on at the high school including musical chairs, a powder puff football game, a parade and much more. Jennifer Kirk is an English teacher […]
OAK HILL, WV・2 DAYS AGO
WVNS

LINDSIDE, WV (WVNS) — It is a moment that called into question the NFL’s safety protocols. In the days since Miami Dolphin’s quarterback, Tua Tagovailoa suffered a scary-looking head injury, the NFL has pledged to make changes to better protect its players. Here in the Mountain State, all high school sports have concussion and injury […]
LINDSIDE, WV・3 DAYS AGO
WVNS

Chili Night is back on this weekend

BECKLEY, WV (WVNS) – After a week’s delay, chili night is back on! Director of Beckley Events, Jill Moorefield says not much has changed when it comes to vendors. “It’s been a popular tradition for fall to come out to chili night and, ya know we hope that people will support it again this year.” […]
BECKLEY, WV・2 DAYS AGO
WVNS

BLUEFIELD, VA (WVNS)–One rotary club in Mercer County held its annual golf tournament. The Rotary Club of Princeton kicked off the tournament early morning on Friday, September 30, 2022, at Fincastle Country Club in Bluefield, Virginia. It is a fundraising effort to raise money for educational purposes and community development needs. Craig Stout, Chair of the […]
BLUEFIELD, VA・6 DAYS AGO
WVNS

PRINCETON, WV (WVNS)–Grant money from one department in the federal government is coming to Southern West Virginia. Child Protect of Mercer County received a continuation of funds from the Department of Justice. The funds total five hundred thousand dollars. Shiloh Woodard, executive director of the agency said the monies plan to go to supporting caregivers […]
MERCER COUNTY, WV・1 DAY AGO
WVNS

RALEIGH COUNTY, WV (WVNS)– West Virginia is, once again, under the bountiful spell of autumn. Folks are pulling out their flannel shirts and team sweatshirts and heading to football games and festivals. For many in southern West Virginia, the fall season also means a trip to Okes Family Farm. Nestled in Raleigh County on Blue […]
RALEIGH COUNTY, WV・1 DAY AGO
WVNS

BECKLEY, WV (WVNS) — As the leaves start to change color and prepare to fall, one group wants to make sure leaves are the only thing on the ground by the side of the road. The Piney Creek Water Association in Raleigh County went out to pick up litter along the Clarence C. Meadows Highway […]
RALEIGH COUNTY, WV・1 DAY AGO
WVNS

BECKLEY, WV (WVNS) – Buildings in 21 communities across West Virginia are scheduled to be demolished. The demolitions are all coming from $9.2 million in grant funding from the West Virginia Department of Environmental Protection (WVDEP). Gov. Jim Justice held an event with the WVDEP yesterday, October 3, 2022 in Matoaka, one of the communities to […]
MATOAKA, WV・2 DAYS AGO

Alderson to host inaugural Fall Festival on the Bridge

ALDERSON, WV (WVNS) – The town of Alderson and Alderson Main Street will celebrate the first ever Fall Festival on the Bridge this year. The festival will include live music, community vendors, an art car painting demonstration, and a straw bale scarecrow contest open to local businesses, individuals and organizations. The fall fun takes place […]
ALDERSON, WV・3 DAYS AGO
WVNS

FAYETTE COUNTY, WV (WVNS) — A community-oriented expansion nears completion in Fayette County. New River Health is a staple in Fayette County, With offices and services across the area, many rely on NRH for their healthcare. In order to serve the community better, NRH began work on a community-oriented complex in 2019. NRH purchased the […]
FAYETTE COUNTY, WV・14 HOURS AGO
WVNS

RAMEY ADDITION, WYOMING COUNTY (WVNS)– Rt. 97 is closed in Wyoming County at Ramey Addition. According to Wyoming County 911, the call came in around 5:15 p.m. regarding a tree in the road. They tell us power and phone lines have been affected and AEP has been dispatched. No word on when the road will […]
WYOMING COUNTY, WV・1 DAY AGO
WVNS

PRINCETON, WV (WVNS)–Students are back in the classroom at Princeton Primary School after a long wait! Monday, October 3, 2022, Princeton Primary School fully opened its doors to welcome back teachers and students. This was after the administration found mold within the building and shut it down. Cleaning crews came in the following week and […]
PRINCETON, WV・1 DAY AGO
WVNS

VICTOR, WV (WVNS) – We’re just a few weekends away from a famous tradition in the Mountain State: Bridge Day. On October 15, 2022, the event will kick off on the New River Gorge Bridge and preparations are in full swing. This will mark the first Bridge Day to be held in three years because […]
FAYETTE COUNTY, WV・2 DAYS AGO