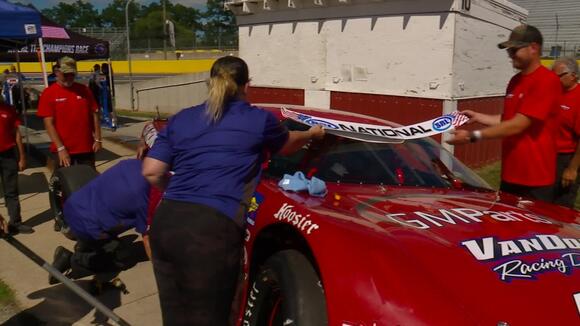 MARNE, Mich. (WOOD) — Some of the biggest names in NASCAR have arrived in West Michigan to race in the 12th annual Battle at Berlin on Wednesday night at Berlin Raceway.

In June, Byron won the Money in the Bank race, while Jones is a two-time winner at the track.

“Raced here a lot growing up,” Jones, who grew up in Michigan, said. “Been fortunate to win a couple, which has been fun, so I want to keep adding to that”

“We’re doing a lot of travel, so it’s been 30 plus weekends on the road this year, it gets tough,” Byron said. “But honestly this is what I love to do, I really enjoy just racing and perfecting my craft.”

Jones and Byron are the two front runners to take the checkers on Wednesday, but the local favorite is Carson Hocevar. The Portage native is still looking for his first win at Berlin this season, after coming off a serious ankle injury he sustained in a crash during a NASCAR truck series race back in June. The 19-year-old couldn’t compete earlier this summer at Money in the Bank, and said that motivated him more ahead of Wednesday.

“I’m excited to finally be back and enjoy this race,” Hocevar said. “I had to miss the first one obviously with an ankle injury, it’s made this race even bigger for me, this isn’t my second chance at this race like everybody else, this is one and done for me, so we got to make the most of it, and I think of all people to maybe do it I think we have a really good shot.”

The disaster is 1,400 miles away but operators with the United Way’s 211 system in Michigan, including those at the Grand Rapid’s call center, are helping residents in the path of Hurricane Ian get the help they need.
MICHIGAN STATE・2 HOURS AGO
WOOD TV8

Creation, Destruction, Reflection and ‘In My Eyes’ win big at ArtPrize 2022

Creation, Destruction, Reflection, a mesmerizing display of broken and reconstructed clay jars housing tiny detailed dioramas, won the largest single prize at ArtPrize 2022, with artists voting it the best piece in the competition and awarding it $12,500.
GRAND RAPIDS, MI・1 DAY AGO
WOOD TV8

Storm surge from Hurricane Ian washed through the Naples, Florida, home of a woman originally from West Michigan.
NAPLES, FL・2 DAYS AGO

Hurricane Ian had a Grand Rapids couple canceling their destination wedding in Florida just days before it was supposed to happen.
KENTWOOD, MI・1 DAY AGO
WOOD TV8

How ArtPrize turned Grand Rapids into an art-filled city

Grand Rapids’ Southtown neighborhood is a little greener, thanks to hundreds of volunteers.
GRAND RAPIDS, MI・46 MINUTES AGO

As Hurricane Ian batters Florida, people there are hunkering down, including a couple with ties to West Michigan.
MICHIGAN STATE・3 DAYS AGO
WOOD TV8

The top spot in the O-K Gold Conference will be on the line Friday night when Catholic Central meets South Christian at East Kentwood.
ZEELAND, MI・2 DAYS AGO
WOOD TV8

The Spartans shot a final round 19-over par 883 Wednesday, putting them in seventh place out of 18 teams at the Folds of Honor Collegiate competition.
GRAND HAVEN, MI・2 DAYS AGO
WOOD TV8

The Salvation Army of Kalamazoo has started its Share the Warmth Drive.
KALAMAZOO, MI・4 HOURS AGO
WOOD TV8

All eyes were on Florida as Hurricane Ian took aim at its west coast and was expected to cross over the center of the peninsula in the coming days.
GRAND RAPIDS, MI・3 DAYS AGO
WOOD TV8

El Vocero Hispano newspaper was established nearly three decades ago and has been serving the Spanish-speaking community in West Michigan continuously ever since.
MICHIGAN STATE・3 DAYS AGO

A year after Kalamazoo built its first graffiti wall at a local park, its success is sparking the Parks and Recreation department to add more across the city.
KALAMAZOO, MI・2 DAYS AGO
WOOD TV8

A U.S. Marine Corps veteran is using her love of photography to share the cost of war that veterans pay even after the war ends.
GRAND HAVEN, MI・12 HOURS AGO
WOOD TV8

The national tour of a Jack O'Lantern display will debut in Walker on September 30.
WALKER, MI・1 DAY AGO
WOOD TV8

A revived Hurricane Ian set its sights on South Carolina's coast Friday and the historic city of Charleston, with forecasters predicting a storm surge and floods after the megastorm caused catastrophic damage in Florida and left people trapped in their homes.
CHARLESTON, SC・1 DAY AGO