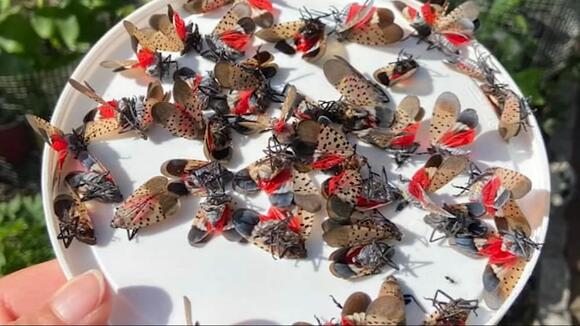 Experts say you may soon see more spotted lanternflies in your backyard, as late summer is typically when the nymphs transform into adults. For one neighbor in Woodbury, New Jersey, the infestation became so bad the city had to chop down some of her trees. Ashley Mailahn says never intended to be an expert on spotted lanternflies. The volume in her backyard, however, left her no choice. "Thousands. Easy. I mean, you can look at the ground, they're littered everywhere," Mailahn said. SEE ALSO: 'Step on them and smash them': What to know about invasion of spotted lanternfly

Spotted lanternflies, which are hugely destructive to a wide variety of plants, have been spotted in at least 11 states.

It's forced her to go on the offense. "I don't want them to kill this tree. I love this tree. This tree's my favorite," she said examining her yard. She decided to wrap parts of her trees in flypaper to trap the invasive bug. "You kind of have to accept that you're probably going to kill some bugs that you don't want to. But in the grand scheme of things, these bugs are killing my trees," she said. It's one method homeowners have been using since spotted lanternflies showed up in the United States in 2014. They were first found in Pennsylvania.

A Montgomery County, Pennsylvania family is combatting the increase spotted lanternfly problem with a trap made of rubber and netting from his 3D printer.

Now, they can be found swarming buildings in Jersey City, hopping through Philadelphia parks, and clinging to Wilmington trees. "All the young ones are transforming into the adults," explained Jon Gelhaus, a curator of entomology for The Academy of Natural Sciences of Drexel University. In the last eight years, researchers have learned more about the invasive bug, including how it stresses plants and how it's important to not allow the bug to travel further. Still, experts warn to be careful how you kill the pest. Chemicals you may use to kill the bug could end up hurting your plants too. "You can stomp on them," Gelhaus laughed. "And people do. That's getting some, but their increase is so great." The Penn State Extension, which studies the bug, says it's likely here to stay. Mailahn just hopes they get out of her yard.